The day I became too immature for Christmas cookies.

Just so's ya know... I'm still feverish so I take no responsibility for what I'm about to write. In fact, I might have to do a rare double post to hide these shenanigans from my more gentle readers. Consider yourself warned. And now... the day in which I became too immature for Christmas cookies... 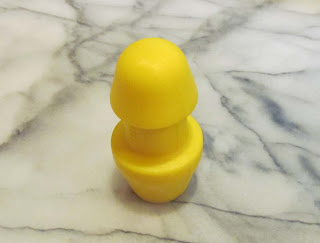 This. Henceforth known as "The Implement."

It was Friday and I vaguely remember it due to fever. But I do recall that my husband has been an exceptionally good sport with me loafing around due to sickness. And he does love Christmas. And cookies. I determined that when he came home from a very long day of work that he should have Christmas cookies - just like Grandma used to make.

It is a fact that I inherited the box of baking supplies, cook books, and all Grandma's carefully recorded notes on each and every Christmas cookie baking spree. She was very diligent with her record keeping so I knew I'd be able to recreate a lovely childhood memory for my loving husband.

Also, my friend J posted a picture of her own cookies and we decided they were a breakfast food. They looked pretty good. So I knew which ones I was going to make. The pecan tassies. The are a chore to make but my loving husband is worth it. I got to work, found the box of cooking tools, opened it gleefully..... and then was reminded why I don't make pecan tassies.

Immaturity. I'm lousy with it.

When I first got the treasured box of cooking tools. I happily opened it right up, eager to gleen all of that wisdom that Grandma had accumulated over the years... and then.... I spied It. I quickly replaced lid on the box and stomped away. I was sure someone was playing a joke on me. It wasn't funny. At all.

To be sure it took me a long long long long time to work up the courage to ask my husband what That was. I never could ask him. Grandma was the very pillar of Christian virtues. Saintly in all her ways there is no way she would have what-one-might-think-it-was in her possession. Ever. There had to be an explanation. For years the box sat untouched. Finally, my curiosity got the better of me.

One day, I peered cautiously into The Box. There It was. Mocking me. I used a spatula to poke it. Nothing happened. I got gloves and with as much dignity I could muster I gingerly picked it up and looked at it trying to determine what it might be. It turned out to be labeled. Oh. It was indeed not That. It was a tart maker. Mini tarts. Entirely respectable. 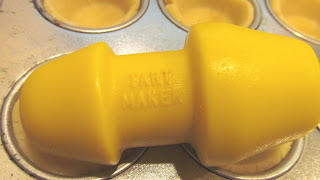 It's a tart maker, you filthy animals.

If I wasn't already strung out on all kinds of cold remedies I would have had to take a shot of bourbon for courage and to steady my nerves enough to to use The Implement. Not wanting to risk additional liver damage I sojourned forth into dangerous territory entirely sober.  I could do this. For my loving husband. 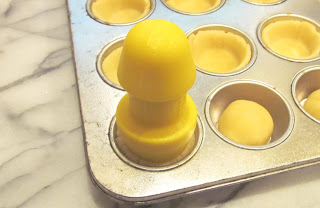 This is how you use it. It is entirely respectable.

The snickering commenced. Followed by stupid emails to friends. There was shrieking laughing. A number of loudly declared "I can't even's." I barely got thru it. The Implement looked at me accusingly. I screamed with laughter again.  Even Nicholas eventually left the room.

Finally it was over.

All that was left was to clean the kitchen back up and retire the Implement back to the box of tools. It goes without saying, there was no way I was hand washing it. With several cats looking on nervously I took my longest kitchen tongs, grasp the Implement, and put it in the dishwasher.

And no one will ever speak about this again.

To make matters worse, it turned out that I didn't even have any pecans. Not being one to tell the difference between one nut and another I just used walnuts. Then I improved them by adding a few chocolate chips to one of the batches. It may be a bastardization but I think it worked just fine. Here is mostly the recipe. 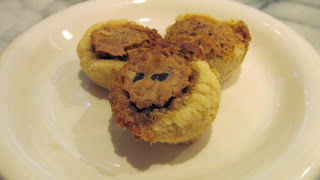 All is well that ends with cookies. And yes, they are a breakfast food.

That is all I have to say about that.

Happy Monday everyone! Are you making Christmas cookies? They are a breakfast food, you know.

Posted by Ohiofarmgirl at 3:11 PM

Indeed they are a breakfast food. Our traditional Christmas morning breakfast in fact.

The first time I read this post I *thought* I knew what you feared it was and I snorted in laughter. The second time I read it, I really figured it out and I nearly died. And then sent it to my immature friends who also love to bake. Minds out of the gutters ladies. 'Tis the season.

you said it, AZ! a fine breakfast indeed.

CTF... it legitimately is a TART maker. some of the wisenheimers over on the fb thought it was a fart maker. for heavens sakes. tart maker. but you can imagine my surprise when i first found it.

I am so with you about that 'implement'...it does look 'suspect'! I also have a couple of implements here which I have trouble with being sensible about. Kitchen implements, that is what I mean. Anyways, how wonderful to have that inheritance from your Granny.....

More bourbon and it wouldn't matter what it was. You quit too soon with the booze. :-{

Vera, I tried very hard to give the whole thing the respect it was due... but I just failed miserable. Hopefully Grandma will forgive me. And yes you have no idea the treasures I received from her. So many cookbooks with her notes in the margin. Just heavenly.

This is why you are one of my favorite people, Ian. Yay!
:-D

That thing would make a tart out of anybody, as my scottish friends would say

Those of us a little tired, sitting at work, needing a much needed laugh - <> That is FUNNY. Even better some of the lovely comments. I don't think I could have managed better than you. LOL I needed that giggle.