Dogs really are amazing. Really, really, really amazing. My Fighting Uruk-Hai Princess BearKiller is one of the most amazing of all dogs. Kai is my best hunter, our best killer, she is a relentless and exquisite predator. She's also really good at finding ducks. Who knew? 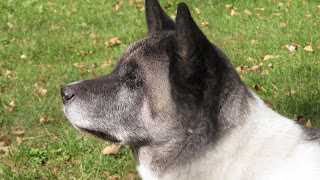 Our dogs earn names and titles for valor and deeds of bravery but I'm not sure that Kai will be officially titled with Princess Wiggles DuckFinder...it kinda takes the shine off that whole VengeanceBringer thing. 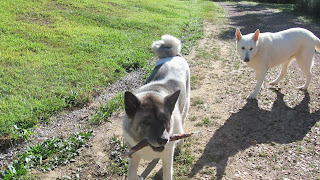 No, that is not her stick. Yes, she is teasing Ti. Yes, he is totally annoyed with her. Ha!

Despite being one of nature's most perfect killers our Kai is ridiculously silly. We've always called her Wiggles because of her funny personality - and the way she shakes her bonbon, double curled tail. She is a very very funny dog. She likes to play tricks and we are surprised at her advanced sense of humor. She loves to tease her brothers and has always been The World's Most Annoying Little Sister. We think she is perfect. 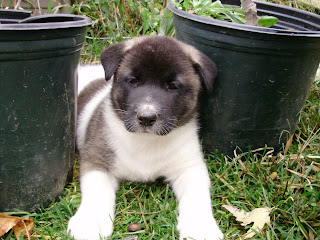 Our baby Kai when she first got here. She started out cute and she is still adorable today.

We have recently been riddled with predator attacks. Yesterday we went out to find one of our laying hens dead-by-hawk. We were mad. Real mad. There isn't one thing to do about it but get a feedsack and take up the shattered remains of that poor hen.

Then we looked around and realized we were missing a little duck - one of the runners. She is a good layer and funny little thing. The drakes were upset and confused. We walked the property looking for the duck - or a body. Nothing. We looked again. Nothing. Dang. 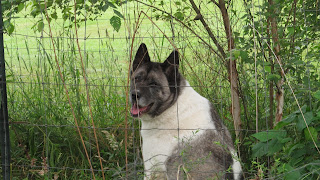 I decided to try one more time and went and got Kai. I showed her when the chicken had been killed hoping she would get the idea to find something similar to that scene.

"What do you see?" That is our command. It's kind of like "find it" but is more broad as in - look around and if there is anything unusual you should let me know. It's also a preliminary command to "get it" if hunting is required.

Kai put her nose to the ground and started patrolling. 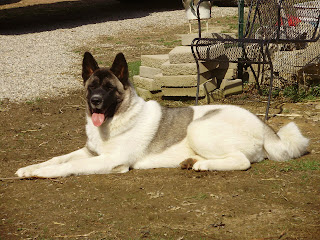 She has always been beautiful.

We made our way up to the garden where the ducks had been hanging around on the off chance that she had made a nest in the bramble. I pointed, "What do you see, Kai?"

But Wiggles had walked a few steps away from me with her nose down. "No. Here, Kai." I pointed where I wanted her to look in the brambles, "Here." She looked at me and grinned and shook her bonbon tail, nose down... facing the other way.

I'll be damned. Right there. There was the duck. I was practically standing on her. I didn't even see her and that duck hadn't made a sound. Kai pointed, smiling. Good girl.

The little duck was pretty bad off. It looked like someone had scalped her with a dull spoon. The geese. It had to be. They had been aggressive lately and OD has always had it out for the ducks. He wants to be the boss of them. Geese are mean, friend. Not only to people but also to other poultry. This little duck had really been worked over.

I picked her up. Apparently she had gotten tangled up in some netting so she was a sitting duck for goose abuse. I didn't think she would make it.

Kai and I carried the little duck back to the house. I yelled for The Big Man to call Kai in and give her treats. The duck and I went out to the garage. I fixed her up as best I could but did not have high hopes. At least she wouldn't die outside alone in the cold or killed by whatever stalks in the night.

This morning I went out to see if the little duck had made it - she did! Not only had she recovered but she found a few chicken eggs and sat herself down on them. Well, maybe that will give her something to do while she recovers. Thank heavens! And thank Kai!

For her part Princess Wiggles DuckFinder got extra treats and then went and ate everyone else's food. She might think that she is the Top Dog now and it's gonna take a while for that to settle down. But we were very proud of her. Not only for finding the duck but for finding-and-not-hunting.

It's a huge win for Kai - the difference between hunting and working. Some people will wonder if it was 'just lucky' that Kai found the duck? Nope. That's what a hard working farm dog does. It was intentional - not by happenstance. Did I set out one day to train Kai to find ducks? Nope. But I did train her to be a good dog and help me. It is a lot of effort but it's worth every minute.

To be absolutely clear, if I put Kai outside with the poultry alone it would be a massacre but she knows when we are working and what is expected. More than anything she loves to kill ducks. I was there the day she put it together that those loud flappy things were full of meat and blood. The look on her face was priceless, "You are KIDDING me?" So she knows what ducks are full of... but she also knows what it means to be a hard working farm dog.

I couldn't farm without my Dog Horde. Every day - every single day - I'm glad I have them and that I put the effort into training them.

Happy Saturday everyone! Did your best killer find a beaten down duck? Do you call her Wiggles?

Posted by Ohiofarmgirl at 9:26 AM

Daily dose of dogness. Major why in how come I'm living way out here.

we love our crew, CollieGuy. they are completely amazing.
:-)

In your "did I train them that way?" post you said..."The Dog Horde knows with 100% accuracy what will happen when they don't do their jobs or if they misbehave." What happens exactly? What do you do so they know with 100% accuracy? Really, I'd like to know so I can train my dog better. Thanks!

Thanks Jules! and no problem what happens is that they are "corrected." the correction depends on what they do or have done. mostly i correct them with my voice - yelling in a sharp tone, "NO! Stop it!" or worse, "I CAN SEE YOU!" Sometimes I use a loud hand clap and an aggressive step forward. If I can't get someone's attention sometimes I will make a loud and unexpected noise - like throwing a bucket. This redirects them to me and what I'm telling them. The Worst of All Worsts is that I'll physically stomp over and snatch up the offender by the scruff, wrestle them down, and scold them in my worst tone of voice. Then I march them into the house, scolding them the whole way, and tell them to "LAY ON THAT BED" while pointing. By this time they are all likely die of humiliation, throw themselves down, and avert eyes. I then offer my hand. When they lick it - in the most submissive posture ever - I will let them up. This works for my crew because it's what we have always done. No one gets a pass for being naughty. Being excluded from the group (being sent in the house) is the worst punishment for any of them. Sometimes if one of them has the wiggles too bad they have to "go watch the house" with me chasing them up there hot on their heels. The rest of us - the good dogs - get to play in full view of the offender. One time Kai actually cried when we did this. And if you think this is bad... just wait until Daddy gets home. My husband is a very large man with a huge, deep voice. Dogs have peed their pants while being scolded by my husband. He uses his voice and his size to bring them into check. The most effective tool we have is discipline. We "own" everything. You want food? You'd better sit there quietly. You want to go out? Not if you are being pushy. Try and take anything off the counter? You will be marched to your bed and have to sit there. Sometimes it's sad being the dog. Be the Pack Leader really is a great book. HOWEVER, if at any time your dog growls at you or snaps. Run, dont walk, directly in and call your vet for a good dog trainer.
Does that help?
:-)

I have to be partial and tell you that Kai is my favorite and she is beautiful!! Love that breed and Norwegians!!
Rita

yay! thank you Rita! i will tell you the truth that Kai is her daddy's favorite too. she is SUCH a daddy's girl you cannot believe it. i randomly found a pic of a Norwegian that looked just like Zander!
:-)