So, OD tried to drown that little rooster in a bucket..... 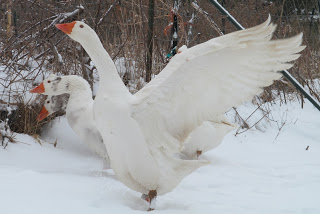 OD our Demon Gander, assassin, from several years ago.

That gander we have, OD, he and I have a complicated relationship. I love him. I hate him. I love to hate him.... I hate to love him. Mostly this time of year I really really hate him. You remember the story of when we first got him, right? The geese are extremely aggressive right now because our lady goose, Cindy Lou, has made a nest. The two younger ganders and OD have ratcheted up their protective instincts and nothing is safe.

Not only are they trying to kill me every time I go out to feed them or put them up for the night - they are also trying to kill everyone and everything else outside. Zander thinks this is hilarious and thinks teasing the geese is the funniest thing every. Kai thinks this is hilarious and goes out looking for a fight.... but unlike Zander, she is serious about it.  Poor Lucky, hobbling along like he is, is not fast enough to get away so we all usually have to save him from those mean geese.  Ti has had enough of all of their hijinks. 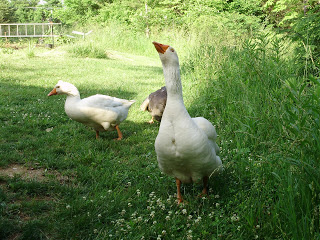 I'm always getting the stink eye from that guy.

The geese are so aggressive that I've been holding back a story because I didn't believe anyone would believe me. But believe you me this happened... the other day I heard a ruckus and I looked out to find that chicken killing hawk on the ground fighting all four geese!  Friends, I'm here to tell you that is a fight she cannot win. I couldn't believe my own eyes. We rushed outside but she flew straight up and got away. The geese were not injured.

I swear to you that happened.

I thought that was the most unbelievable goose story ever. But that isn't even the weirdest thing to happen. Yesterday morning, before chores, I heard various flapping and figured the geese were just yelling at each other. But Titan hopped up, in alarm, and so we ran out there.  I have learned to always believe the dog.

We rushed over to the Turkey House (where the geese are) and threw open the door. Ti and I both stood there slack-jawed and buggy eyed to see OD trying to drown that new little rooster in a bucket!

OD: *spits a mouthful of feathers out* Wut?

I honestly didn't know if he had killed that little rooster or not. Ti and I sprang to action. There was a fight, actual hand to hand combat... and then goose to dog combat.... OD was not winning that one.

Quickly I called the dog back and booted that goose out of the Turkey House.

That little rooster lay in a heap.

"Um... you OK there little Buddy?" I asked. I mighta poked him a little with my boot. He rallied.

The Demon Roo of ThatOtherCounty was not so tough as it seems. Getting his tail feathers kicked by an overgrown duck kinda took the shine off his he-man machismo.  For the record, he still hasn't tried to make a run at me. And yeah we still have him because The Big Man was called into work on his 'free' day. But soon we'll end up with that smaller than expected dinner we'd been promised.

All I know is that we have a very very very odd little life and I couldn't make this stuff up if I tried.

Happy Friday everyone! Are there poultry fisticuffs at your place? Have you ever seen anything like this before?


Posted by Ohiofarmgirl at 9:09 AM

Moonshadow--- wow just wow...its all i got except "yeah well better you than me this time" lol smh spring must be in the air!!!!

Oh dear, hope OD calms down, although I suppose he is only doing his job. Our geese are laying, but can't be allowed to sit on the eggs because the nests can't be protected from foxes. As for our chickens, ....the dogs know that when a chicken makes a certain noise it means there might be some eggs to be hunted for, and when the hen makes another sort of noise when a cockerel is on top of her that that cockerel needs to be chased off and away! The dogs love it when that happens, means that they might also grab a mouthful of cockerel tail feathers!

Vera - the only bad thing about spring is that it's a flat out cage match. fighting at every turn.

That's terrible! I have heard about that before actually - someone on Backyard Chickens was asking if she could house geese, ducks, and chickens together and someone told her that when she did that, she kept mysteriously losing chickens... eventually she came out and saw two geese coordinating in holding a little hen under the water. So this seems to be a thing they do. Pretty nasty - I guess you just decided me that no, I really do not ever want geese!

Summersweet - OD is a confirmed hen killer. he killed one of the former owner's hens...and then he repeatedly attacked several of ours. the trick is to make sure that the hens have a safe place to run. i honestly do not know how he got into the pen with that little roo - the door was latched. wow!

Moonshadow-- poor little roo. At,the last place he was a king, a warrior to be revered and feared, He could send grown men to cower and run....Now.....
now hes a geese's chew toy. Lol poor little roo lol