Nothing but dog drama here.... Ti is much better but it's hard keeping a working dog off his feet.  We had to double down on our effort to keep Ti on strict rest. He's a tough guy so a little pain isn't enough to keep him from running around. It's been nothing but sitting around with short walks outside. 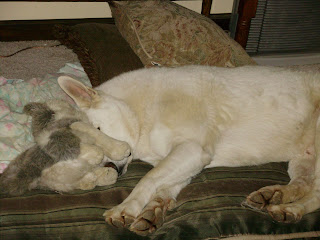 Back in happier days when Ti had his favorite bed. Now in the trash.

All of the dogs are in fits because our routine is so disrupted...and they are all bored. To try and rein everyone in we've been doing a lot of dog shuffling. That is, we've been moving the dogs from room to room in different combinations trying to keep everyone entertained. This works. Mostly. But the rain is also putting a damper on everything so being stuck inside is not helping.

To make it worse, Zander destroyed Ti's favorite dog bed. To be fair, Zander started ripping up the bed and Kai kind of made it worse. But it's been extremely sad to see poor Ti, still in pain, trying to gather up the shredded remains of his favorite snuggle bed into a pile and try and get comfortable in the fluff.

Of course, there is also the cat factor... every chance she gets, Bitty, attacks the sad pile of dogbed fluff and it was getting dragged all over the house. I finally had to go around and gather it up and throw it away.

The betrayal in Ti's eyes as I was throwing away his favorite bed was almost to much to bear. So it's been very very sad here.

I tried to soothe it over with extremely fresh chicken hearts but that didn't even work. It's pretty bad when not even organ meat will make your dog smile.

TL:DR Bubby Bedkiller disemboweled Ti's woobie and I threw it away because I'm The Worst Momma ever. It was an offal day.

Posted by Ohiofarmgirl at 9:32 AM

Everyone's getting stir crazy here as well, but the cows are worst. Good job they are outside in the barn and not in the house. The dogs are being naughty enough but at least they smaller than a cow, and therefore more manageable!

everyone has lost their minds, Vera... it's been a long couple of weeks.

thanks, Dave! it was a very sad day.