I love summer... I love dinner... I love summer dinner. We usually don't ever go "out" for dinner - there aren't a lot of good choices nearby and both of us hate to drive into town in the evening. So when we go "out" it's usually actually in...but we just get stuff we don't usually have here. 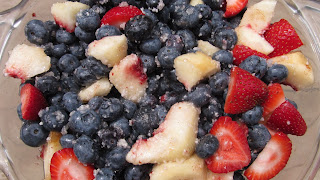 The lack of summer fruit has been abysmal so we got some berries and peaches for a crisp. 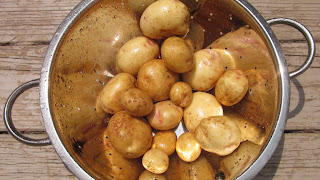 But these are our potatoes for the tater salad. I think they are lovely. 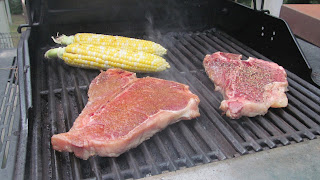 And we got steak! I love meat. Yay! 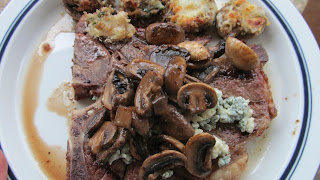 We also had corn on the cob and mushrooms two ways (stuffed and sauteed). I had my huge t-bone smothered in onions and Gorgonzola...it was heavenly.

Unfortunately we had to run for our lives.... we were just finishing up on the grill when yet another storm system blew in. Hard. It blew in really hard and I was afraid it would blow the flame out of the grill. But we got grilled just in time.

Dinner was so good that I declared that I needed a cow... such is my love for meat. But I was hastily rebuked by The Warden... I mean... my husband with a reminder that cows hate me. I don't know why but it's well documented. In fact, there was an incident that may or may not have happened exactly like this.
(Part Two here.)

It is entirely true that, as I was standing there alone in a field with a big stupid cow running right at me... I thought to myself, "This is stupid." The worst thing that could happen to us isn't if the chicken house burned down or if a storm blew down everything in our garden. Nope, the worst thing that could happen would be if I got hurt. So we choose our battles wisely and for whatever reason, cows just do not like me. So, nope I'm not chancing it.

About this time someone declares that all's I gotta do is snuggle up them cows and then all my problems will be solved. Or worse some yahoo says that I'm afraid of them. Nope. It's just plain physics. Or animal instincts. I don't know. Maybe I'm just unlucky.

Sure they like my husband. They follow him around like puppies. Me? They start eyeballing me and then either start crowing me or just run away wildly. I do not know why.

We also don't have the pasture for cows. Sure we could feed them out but only a fool would take on cows in this part of the world right now. No one has any hay because of our bad summer...and I'm guessing things are going to get much worse as winter gets closer. In fact, we are going to have to start buying hay now for our new-and-improved-limited-goat collection.

As an aside and just so's ya know.... I do not miss Dahli at all. Good riddance!

Anyway. That's the story on why we remain cowless despite by love for meat.

Happy Monday everyone! Did you grill out yesterday? Was it better than going to a restaurant?

Boy howdy does that look good! We did grill but it was veggie pizzas!

I think it is about time for an employee roll call- an updating of employee pictures and job descriptions. A Who's Who of your zoo. Perhaps broken down by department.
Sherri

i hope you are doing a step by step for that pizza, Dave! i can never figure out how to make it work on the grill???