I've been a little under the weather the last several days. I think I had malaria... or food poisoning from eating restaurant food. Whatever it was laid me low so I'm trying to get my feed under me. Drat. 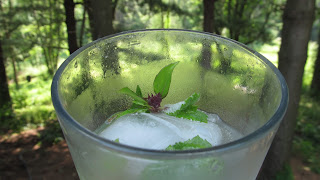 Unrelated pic of the official drink of summertime in the Good Land.

We have all been under the unrelenting rain and it's starting to get everyone down. Mostly we had one nice day of the last ten and that was Saturday. The mud continues and we are working to control it as best we can. But at this point we need to just accept that many of our projects are just not going to get done and make other plans.

We've had some other hubbubery also so we are trying to get ourselves righted. Needless to say things are hopping here. Some of it is worth talking about and some of it isn't. So we've been dealing with that if you've been wondering where I've been.

But the weather had consumed us. If you are limited to being annoyed by the weather while walking to your car it won't make sense why folks like me - who have to work outside - are always caterwauling about it. But believe me it has been a rough go.

While my pals on the West Coast have been having a hot and dry summer we are swimming in mud and cooler temperatures. Normally I wouldn't complain about the cool, but I can't get anything done outside and not even the tomatoes are growing - so it's time to pivot our summer strategy and work on other things.

More on that later. This morning is about gravel and mud control.

Happy Monday everyone - are you having more storms today? The house shook from a thunderstorm for over an hour last nite and more to come today. It wasn't even a nice day - or nite - for ducks!

When I read the heading....at first I thought it said... Under water. Guess that is the effect of all the rain we are having here too. I have water/rain on the brain. Even the pigs are suffering! TOO MUCH MUD! I hope you are feeling better soon....and can get back on track...even if it means a "new track" We are rerouting ourselves here as well..very little that we had planned to get done this summer will actually get done, because of the rain and mud. *sigh*

I am having such a bad garden year, this rain is unbelievable!~ It is so depressing to watch all your hard work just get drowned.....
then the west is burning and parched...
Think God has had it with us

We've got it the other way - drought. There is a watering ban in the Charente, the department only three miles away from us, so at the moment, we can water the garden but not sure how long for. I am doing all I can to save water, but the poor sheep have no grass, so we're feeding pellets, and the vegetables are pretty well parched too. Send us some of your rain!