Quick farm notes, an intro, and a pic I can't stop laughing about:

Peeps:
Meat.. I mean... meet the new peeps. These are our first attempt at creepy meat chickens. We're calling them "dinner chickens" as it sounds less sinister. Got them at TSC - they are 5 days old here. 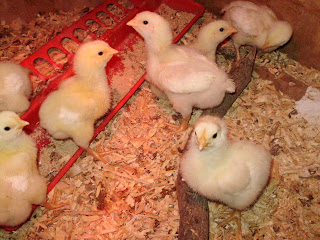 Dinner Chicks
Altho we've dressed poultry before we have avoided the actual meat chickens until now. Generally they go against our naturally raised farm critters goal...and frankly they are pretty creepy. You know when you go to the fair and they have those big, weird, unnatural meat chickens? That's what these are.

We were so pleased with how our less-creepy-but-still-meat-chickens, the red broilers from Ideal, turned out last summer that we just had to give these a go. I'll talk more about them later next week. Until then, meet dinner - in about 6 weeks they will be ready, can you believe it? It takes up to 9 months for a natural chicken to be meaty enough to bother dressing.

Farm notes:
* Technically it snowed two nites ago, last cold night for next 10 days, may be an early start for planting. However the forsythia bloomed last weekend, the old times say we will have 3 more frosts/snows until spring is really here.
* Separated Cindy the Goose so she will set her own nest. She is still penned and mad about it. If she would just have an egg I'd let her out. Our big mistake last year was letting she and Penny share a nest. What a disaster.
* All lady ducks are laying.
* Runner, the turkey hen, is doing great on her nest of chicken eggs.  She is finally getting up everyday and finding her nest when she is done.  Have not found any other turkey hens laying.
* Nibbles is really "bagging up" (which means making an udder); it looks like her babies have dropped. We should be in for The Big Show sometime in the next 10 days or so.
* Debbie looks great, babies are really skip-popping around. We get Vita back on Tuesday, she had a doe and a buck late on Friday night. We can't wait to get our big ol' gal back.
* Peas are making a come back after early first attempt, greens have sprouted, started some onions yesterday. All are under glass teepees - we'll see if it works.
* Asparagus is up! Tomorrow or next day I should have a big ol' plate of them.

And now... the pic I can't get enough of... this is Teddi Grumpkins: 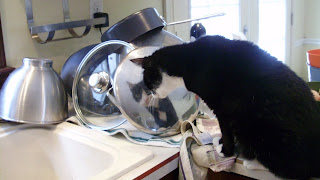 She sat there looking at herself for 15 minutes trying to figure out who that other cat was... finally she peaked around the lid and figured out there wasn't anyone else. So she got mad and stomped away.  Teddi, we found out yesterday, is a duck fiend. She ate about a pound of duck meat after I made stock. True to form she ate TWO necks....now she's duck drunk and passed out on the couch. Not too bad for an older, semi-toothless, declawed cat someone dumped on a winter night. We're glad she found us..and I think she's glad too....except for all these other cats.

Happy Sunday! Whatcha doin' on a rainy day like this?
Posted by Ohiofarmgirl at 2:18 PM

We've not raised meat chickens - but we have culled extra roos and we eat them. Not hardly enough meat to mess with.... but very tasty!

Sounds like spring is definitely arriving at your farm!

I've got a "dinner chicken" in the works. Now I have to be brave enough to do him in. Bad roo!

The rain caught up with us here as well. My lawn furniture was in the next pasture over this morning! Crazy night!

P.S. My favorite kitties are the tux black and whites!

Hey B2B - we were completely unconvinced.. but wow the meaties are really.. meaty! These cornish x's are pretty creepy already but we were willing to give it a whirl.

Hi Sally! I heard you had a wild nite..glad everyone made it. As far as that roo goes - you and DM just gird up your loins and march out there and give him the business. Its not as bad as you think.

Yup, last night was a doozy!

Believe you me, that rooster has made me mad enough to do him in without batting an eye.

I will let you know in the next few days how it went. ;o) I've been reading and reading up on the subject.

Glad you are getting your big goat back.

Nothing says "gone country" more than slau.... err, I mean, dressing your own chickens.

If only the left coast drink and appetizer girls could see us now.

When you buy "dinner chickens" chicks, do you get a straight run of chicks or all pullets? I'm wondering if the roosters will taste just like the chickens b/c you butcher them so soon. (Way sooner than other chickens.)

If my first butchering experience goes well, I would be very interested in getting into "dinner chickens" myself.

You are gonna do GREAT! Really - if you can cut up a chicken from the store you can do this.

And yep you generally can only buy straight runs of the meat chicks (any variety). They develop so quickly its all about the same. We found our meat roos and hens all taste like chicken.. but more chickeny in a good way. These meaties will be a good taste test against random roos and our red broilers. I think the only substantial difference is that older layers make a really rich broth.. but not so good for eating unless in soup or shredded sandwiches.

Chai Chai... you have no idea...hee hee hee oh wow I used to be a princess... now look at me. The only manicure I get now is when I scrape the barnyard "dirt" out from under my nails and usually that's on the way to church!