Our pal, Sal, had a hilarious tale today about how her daughter went to battle with a mean enough rooster, Ohiofarmgirl style. I was so proud. Give 'em hell, baby!

And yeah... B2B the pot is the best end for most roosters.  Even if they aren't as big as the roasters you can still get some beautiful broth off of them. And I'll tell ya –  there is something about the smaller roos that make them the meanest.

We had a little rooster named, aptly, Little Rooster who HATED The Big Man. I thought my husband was making it up until one day I saw Little Rooster peek out from around the corner, intentionally wait for The Big Man to walk by, then fly at him claws and all.

I couldn't believe it!  How could this demon bird have been the same cute roo I had known!? He was always so good with me - Little Rooster let me snuggle him all the time. I kinda like him.

One day The Big Man had enough of Little Rooster's shenanigans and shortly after we had rooster day. We rounded up all his young rooster buddies no problem. But I  nillynallied around about Little Rooster and finally said, that yes, he could go to his just reward. Sadly I brought the victim forth to the axe man, but with weepy little eyes and quivering little lip I said to The Big Man, "Honey, please. Don't do it with malice!"

The Big Man looked at me blankly but agreed.  So I kind of went off a little bit away from the action and hid my eyes...and.. and...

Then I heard WAY too much activity associated with dispatching a chicken and I swear I heard The Big Man say, "And take THAT you little son-of-a-golly-what!!!"

Little Rooster made a nice little pot of chicken and noodles and that night at dinner was the only time The Big Man loved him. I thought I could taste a little malice tho...

So Sal, head on over the Harvey Ussery's The Modern Homestead and check out his graceful and amusing and extremely informative instructions on how to send that mean enough rooster to the pot. Or check out Coal Creek's farms section on butchering chickens. Then march out there and send that rooster to glory.

By the way, from the Farm Kitchen – here's supper: 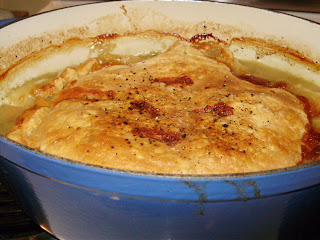 Its not chicken but we're having turkey pot pie! This came together in about 30 minutes, most of it at a simmer on the stove.  I had roasted turkey, broth, and veggies from the freezer, simmered together with noodles, then thickened with cream and cornstarch. Topped with a lard-n-butter crust and baked until golden – about 30 minutes while we chased the ducks around outside. Our cost of goods for the whole shebang... about $2.50. Oh, and yeah we're having fresh bread too. And is that a tiny pie in the oven...why.. yes it is.

Our rooster used to be so sweet too. I sing-called him "My American Boy" after my favorite song by Estelle. (He is an Ameraucana.) He is no longer sung to. I am very cross with my rooster. Grrrr!

(We are having bbq pork shoulder in your honor!)

Yay! Tell your gal that we love her! And her mad rooster beatin' skills! Whoot!

When I saw this I thought of you. Miniature cows for milk.

Malice, are you sure it wasn't garlic?

Humm.. might have been too much thyme, Chai Chai.. hee hee hee

THANKS for the link on mini-cows...aren't they great? you can get mini jerseys too, which I would love. but they are crazy expensive around here. We figure we could buy like.. a million goats for what one little mini-cow-in-milk would cost. But we have our eyes peeled for one at a reasonable rate.

They are also really popular now for smaller farms - if I had more pasture I'd grab me some and make a boat load of money breeding and selling them. It would be a great money maker. Thanks for the link!