Pumpkin scones and catching up

The other day when I did the Day in the Slow Life meme I talked about pumpkin scones...so I thought I'd show you what the big deal was about. 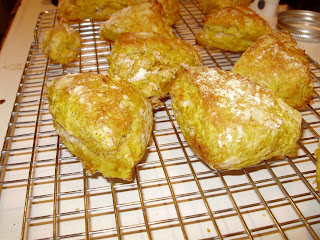 Scones are my new favorite baked treat - aside from pie, of course. They are quick, easy, and really versatile. Remember the perfect blueberry scones? My second favorite kind are the pumpkin scones from Starbucks. I like the spicy taste and all the pumpkin-y goodness.

And me with all these pumpkins.

So I decided to try and find a "copy cat" recipe. Which I did very easily, just search on "Starbuck's Pumpkin Scones."*

The process is super simple. Mix your wet ingredients - in this case, pumpkin, egg, cream. Separately combine the dry ingredients and cut in the butter. 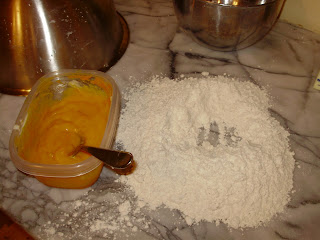 Pour your dry ingredients on your baking table, make a 'well', then pour in the wet mixture. Carefully work in the dry ingredients and use your pastry scraper to gently mix together. Next form a rectangle and cut into wedges. 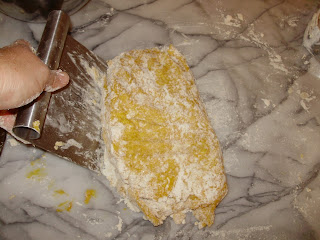 Bake in a hot-ish oven until lightly browned. When cool top with a simple powdered sugar and (goat)milk glaze. 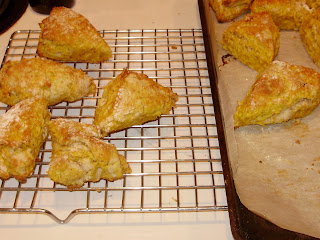 Cooling and ready for the glaze
Easy peasy and pumpkin-y!

* So a small rant and an explanation why I'm not including the recipe. In my old life I did a lot of legal work - nope not a lawyer, but spent a lot of time talking about indemnification and all that gobbleddygook.  I was going to include a link to the site where I found the recipe.... but noticed that the owner had a legal notice that granted the causal user a non-exclusive license to use the recipes for non-commercial purposes. But the whole site was dedicated to publishing the recipes of big name chain restaurants. And the site was monetized so the owner was paid for each click. I don't have a problem with monetized sites at all... but don't pretend to give me a license to use something you have clearly ripped off. And another thing. Some of these chains, like a Big Coffee Place, don't have a secret lab of folks coming up with snacks. They hire local folks to come up with ideas and pay them a couple hundred bucks for each one they use. So you aren't 'sticking it to the man' by publishing those recipes. And so I'm not including a link or the recipe and that site owner can bite me. Rant over.

On an unrelated kitchen note, has your local store started its "Turkey Wars?" We got a buncha frozen turkeys for $0.19 a pound! Which means we got a couple of 22 pound turkeys for about $3.99. THREE DOLLARS AND NINETY-NINE CENTS. You can't even buy a poult for that much - let alone a bag of turkey food. Wow what a deal! Remember you don't have to sign up for a whole roasted turkey. Either have the butcher cut it in half or part them up like I do.

The only thing about a frozen turkey is you have to cook or can the meat after you part it up. You probably shouldn't defrost, part up, then re-freeze. But here's how it works for us, we grind a bunch of the meat, fry it up with mexically-taco seasoning, and portion into taco or nacho serving-sized freezer bags. Or we make meatballs, cook them, then freeze. This makes a super fast dinner when cooked in home canned tomato sauce.

So be on the lookout for those turkey sales and load up the cart!

Farm Notes:
* We had our first really hard freeze (not just a frost it was a freeze) the other nite - so anything considered 'tender' is pretty  much gone. I had hoped to get a few more things up (I had some basil that was really beating the cold), but its pretty much over.
* I was able to save some cranberry beans - I'll be cooking them up soon....and I also took up even more pears. The dogs and I picked up probably 7 or 8 gallons worth.
* And we need to dig up the rest of the potatoes. They are OK with a couple cold nights but we are pushing our luck if we leave them much longer. We tried some of our canned potatoes tonite and they were great!
* Clucks and ducks are going strong. Many of the hens are either just getting over their molt - or just starting. Honestly they are the saddest looking group of hens I've ever seen. Good thing they can snuggle together on these cold nites.
* The meats are going strong. They are getting huge - I'll post another update soon.
* Debbie the goat is acting like she has rabies (just kidding but she is acting like a loon). She and Nibbles have established an uneasy peace. Milking them this late in the season is kind of useless and is burning more hay then its worth. I can't believe we'll have to BUY milk. Sheesh!
* The pigs are looking tasty. They may not be as big as the ones last year.. but they will hold their own.
* The pup is doing great. She slept thru the night and only cries when she needs to go out or needs something. Except now - she can see me and is having a little puppy break down. She hit another developmental milestone and now likes to run with the rest of the dogs - not be carried. That's for babies. So she says.
* And on a personal note, I'm in catch up mode. We've been handling some tricky situations lately  - and have driven about 700 miles in the last week or so..which is pretty intense if you are someone who never goes anywhere. Sorry, if I've been slow to respond. Onwards and upwards, right?

I would go and bake some scones, sis, if I had any pumpkins left. Grew them for the first time this year and we've eaten them all up. Also ever since I have spent a year in your country many, many moons ago I've kind of gone off the sweet and pumpkin combination. I prefer it savoury or spicy. But I'm open to persuasion. Maybe I'll come for coffee at your's sometime? ;)

Turkeys for $0.19 a pound is amazing, what a great deal. Your pumkin scones sound delicious...perhaps someone will bake some for me today if I ask real nice like. That little puppy is so lucky to have two other dogs to use as a chew toy...all our little guy had was us and we have the scars to prove it.

Not to worry, I've been on a mission to find a spicy pumpkin pasta recipe, I like savory also. And yes yes come on in for breakfast... and bring the coffee. I once went to Paris for the weekend just to drink coffee... of course, my favorite torrefazione is in Rome
;-)

Mr. H - hope you get the scones.. they are delish! Especially with fresh butter just shaken up in a jar.

The pup is doing great - and yes, she's in her chewing phase. I'll have some cute pix tomorrow. Bring Rowdy and come on over for a puppy play date!

I could bring Eddie along for an all round chewing session. He' just in the process to dismantle my slippers!

Heiko - yes yes! Bring Eddie as well. Kai is starting to put everything in her mouth. I'll be glad when she is past the chewing stage (as Mr H has found out, it can be painful for all)!

Our Mister Good Dogs are going a great job with the pup.