Look what happened yesterday!  Daisy had her babies.... they weren't a total surprise but of course we weren't ready. 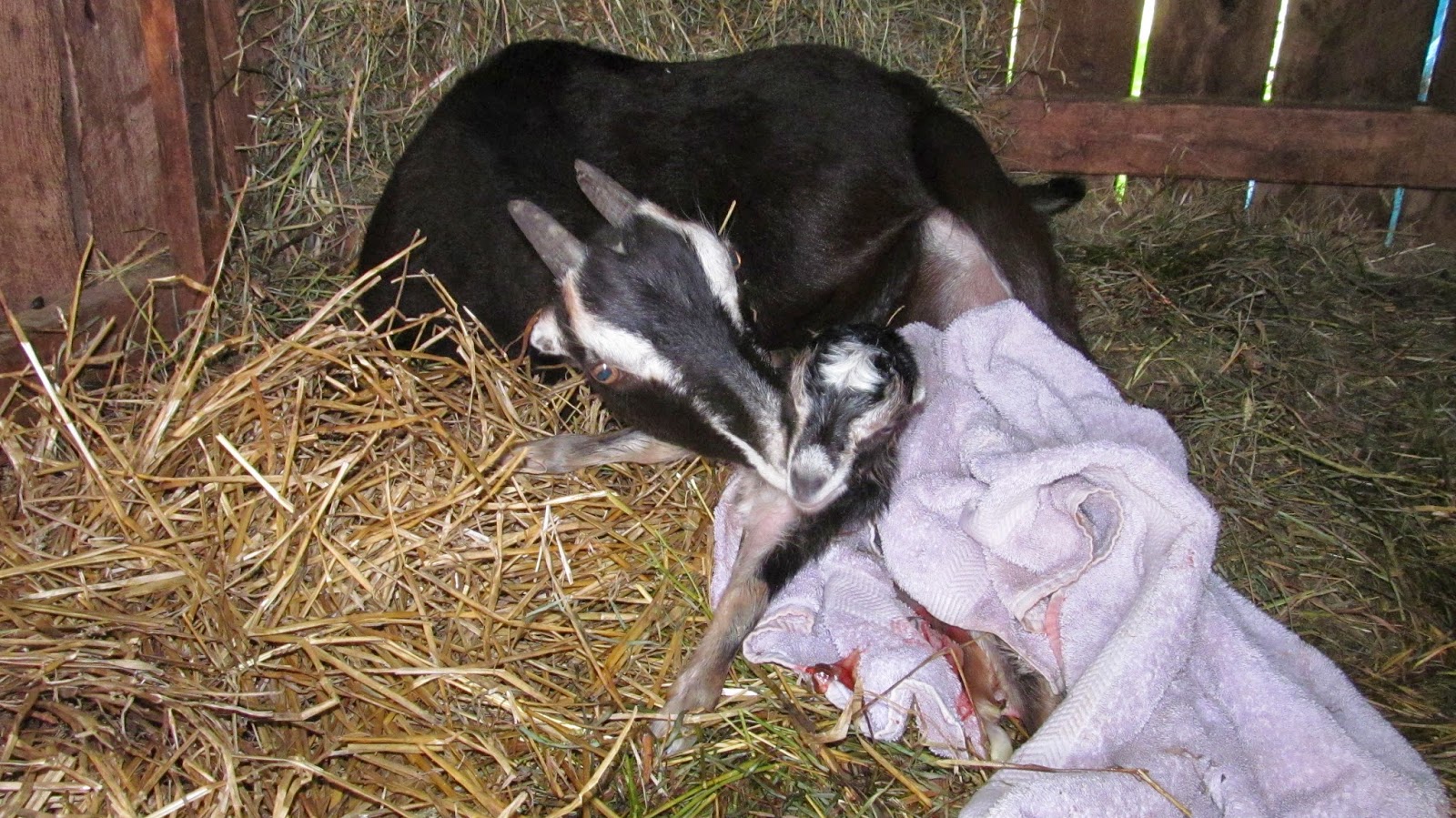 We went out for chores and Daisy came skipping out like normal. Then when I went to get the food she went back into the goat house. Dang. We couldn't even get her moved into the luxurious birthing suite in the Turkey House.

It was taking a long time. We pulled up a chair. We went into the house to get something to eat. I went and mowed the yard. After a while we just had to "do" something.

Of course you know the only thing I was gonna "do" was march over to the neighbors house. I went over under the guise of bringing them some extra tomato plants but that was a complete sham. I wanted our Neighbor Gal.

Gosh, she is terrific. She had to go to work in minutes but still came over to evaluate Slow-As-Cold-Tar-Daisy. Before I knew it, I was holding Daisy's head and the Neighbor Gal was doing something horrible with Daisy's business end.

Then in a flash a HUGE doeling was on the ground. No wonder Daisy couldn't get that baby out! She was bigger than Darla's babies are now and they have been out and about for a while.

The Neighbor Gal had to go to work - not a drop of ick on her shirt - so she put on her shades and walked back home. I was agog. Seriously. She's one of my favorite people.

We agreed that I would let her know what happened - there was clearly another baby in there.

This went on for a while.

Finally the braver of us gently pulled that little hoof, followed by a nose, a shoulder and out popped the second baby. He was huge too!

Daisy immediately knew exactly what to do. The babies nursed without any help from us. Later when we went out to check on them they were running around like they owned the place. We were agog. Seriously. They look like they are old enough to take the truck, drive on down to town, and buy some beer. These bruisers are already ready for action.

And Daisy's udder is divine. I might have declared yesterday that, "I can't WAIT to get my hands on those teats." Which, even in the best context, still sounds kind of weird.

So thanks, Daisy, for these terrific two babies! A doeling and a buckling which seems to be the trend this year.

Next up - Dahli and Debbie. Debbie is huge and her teats are basically dragging the ground. I'm sure it's going to happen soon.

Happy Memorial Day everyone! Don't forget this day isn't just about barbequing and picnics. I love this story. If you know a veteran get them in one of these programs. These dogs aren't just a family pet - they are highly trained service animals who help folks recover from wounds visible...and not seen. We pray God's hand on our active duty military personnel, we ask for peace and healing for our veterans, and we remember those who were lost. Amen and amen.

getting crowded up there

so many goats, Dave..