So this happened on Tuesday...  Oh Darla you are just like your momma aren't you? 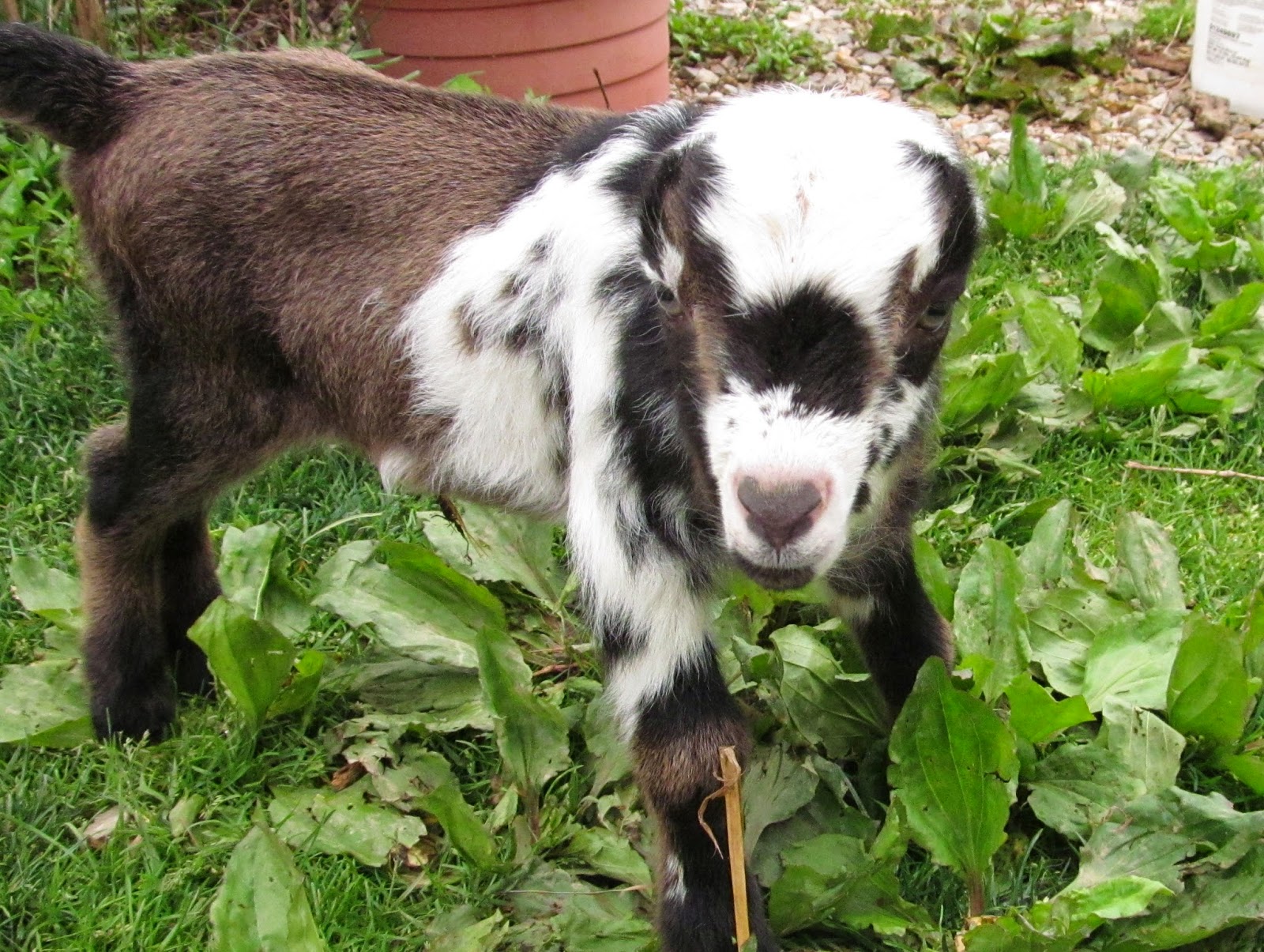 Say "hello" to the new kid, designation, "Darla Baby One."

I went out to do chores and I heard tiny little goatling cries. So I ran faster, threw opened the door of the goat house... and there were two little cream puffs looking at me. The only one more surprised than me was Darla. She had no idea what was going on.

I had no idea what was going on because she was supposed to be due next week.

She really wasn't getting the hang of the momma thing at all and apparently all those experienced goat mommas just let her figure it out herself. Darla wasn't getting it. Seeing as no one else was around - I sprung to action. And by "sprung to action" I mean I turned around and ran into the house. 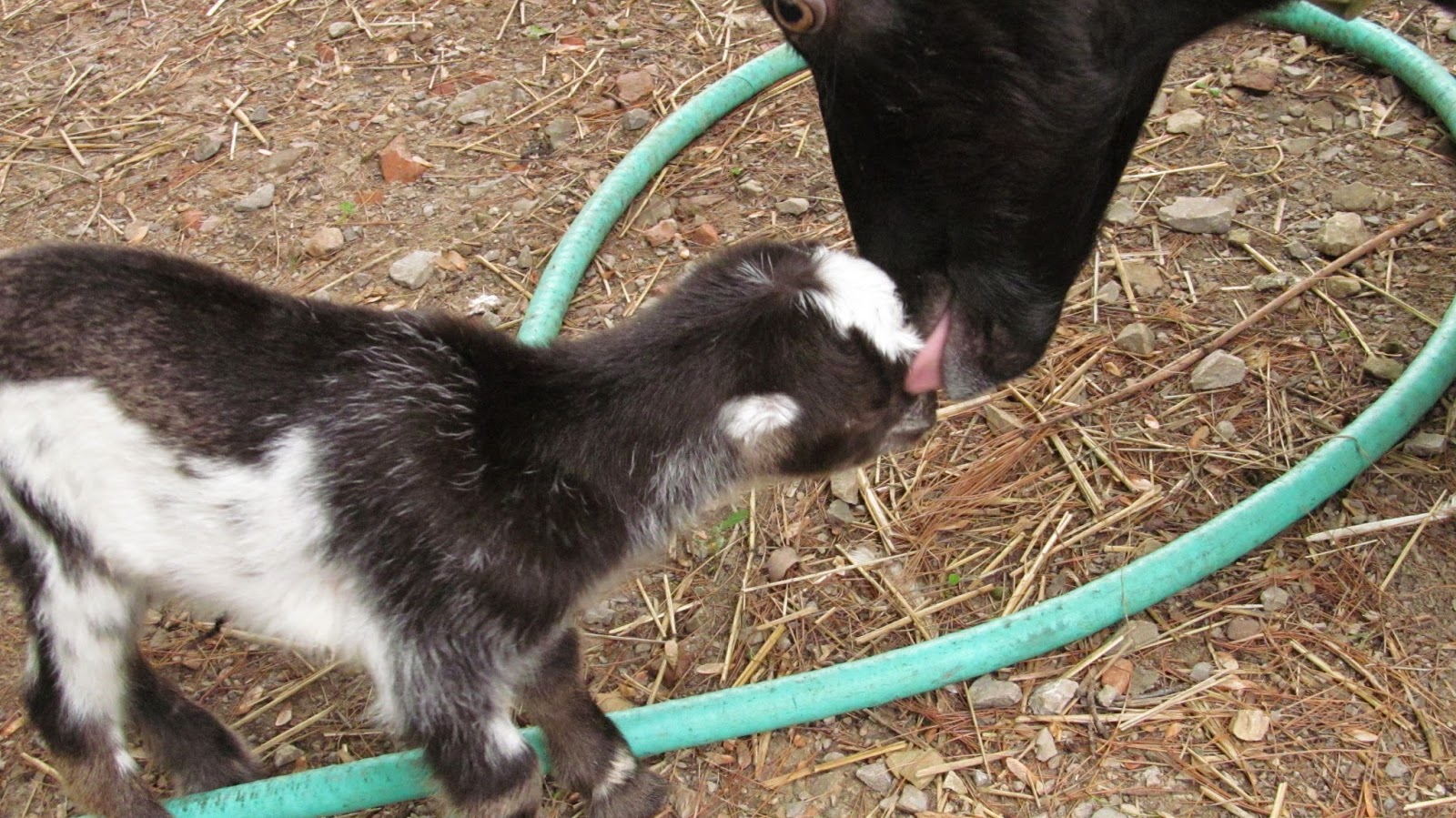 Don't worry - this has a happy ending.

Eventually I summoned up some courage, found some towels, and marched back out there. One of the babies was up and around and completely dry. The other.... wasn't doing so well. She was shaking and obviously in distress - and still wet.

I wrapped her in a towel and rubbed her vigorously. That didn't do the trick so I tried to give her back to Darla who just looked at me blankly. I tried to get the little one to latch on the tap... and that didn't work either. So you just know what happened next. Yep. I shoved her in my shirt.

She was too big to actually fit in my bra... I mean.. my personal mobile incubator... so I made due by sticking her in my shirt. I was aiming for between my tshirt and sweatshirt and missed. Luckily for her she hit bare skin and instantly warmed up and calmed down. I however did not calm down because I then had sticky goat yuck on my bare skin. I very nearly barfed and I'm sure that I have some kind of skin disease now.

Unhindered, and taking one for the team, I grabbed the least likely hero - Nibbles - and ran her directly to the milk stand. Nibs is no angel - I knew she'd do anything for a handful of corn. So I gave her a half a shake of the forbidden golden snack... and stuck the now-warm baby on Nibbles' teat. She latched on and drank her fill. Nibs couldn't have cared less if an alligator was nursing - she just wanted more corn. I gave it to her and soon the baby was milk drunk, warm, and drowsily looking around. Everyone was happy but me because I knew I'd have to shower in bleach to get the goat yuck off of me. 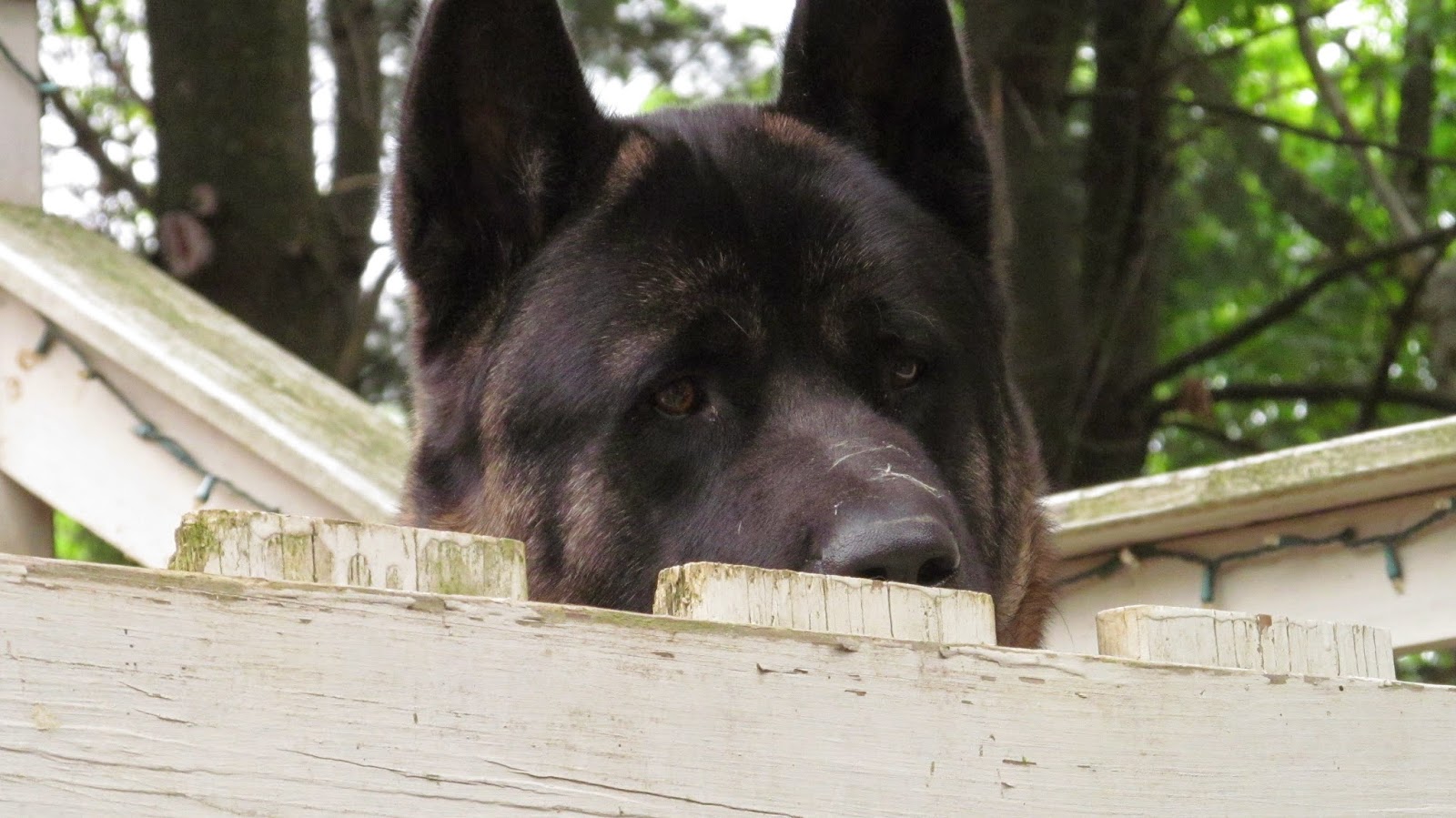 Zander thought me running around with a fresh baby in my shirt was amazing.

The dogs thought this was the most amazing thing they'd ever seen and Kai immediately volunteered to "keep the baby warm." No dice, but nice try, Princess.

Darla took the baby back without question... altho she still had no idea what was going.

And there I was on the horns of a big problem. You see, she wasn't due until next week. I even used Dahli's early kidding date to calculate when the Goat Avalanche of 2014 would start. But alas my plans fell to ruin. 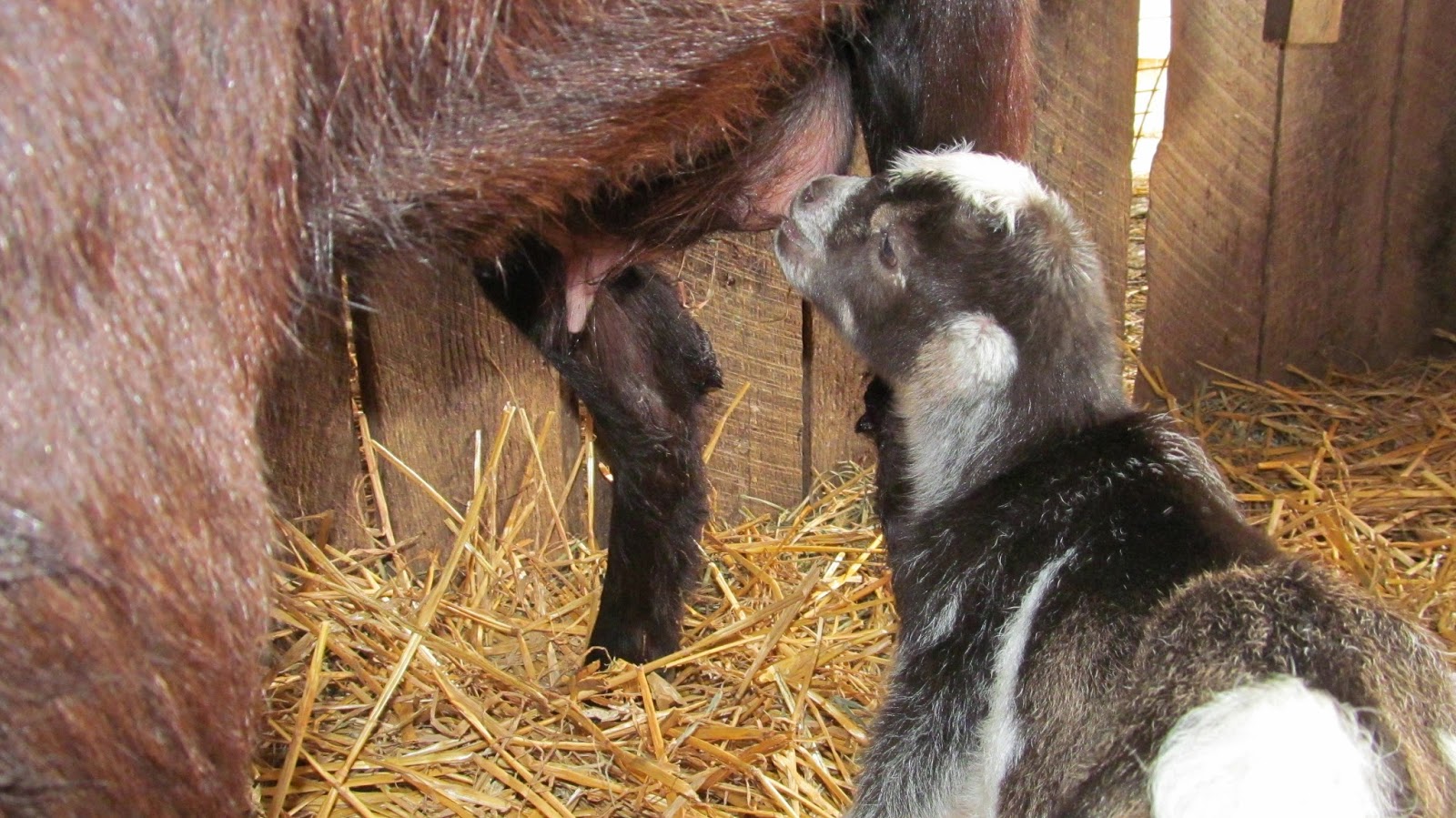 Everything ended with happy babies.

So I had absolutely no supplies, nowhere to put her, and to top it all off... they were working on the road right by our driveway. Not that I could have gone anywhere because my truck was not available. And no, there was no way my husband could come home early for work. Stuck. I was stuck.

And then I checked the rest of the goats and Debbie was acting funny. Oh superDUPER.

I quickly formulated a plan and got to work. In no time I had found as much fresh straw as possible, set up one side of the Turkey House, and was dragging an uncooperative Darla across the yard. I got her and the babies installed and.... somewhat predictably she just looked confused. And then she didn't really seem that interested in the babies.

So guess what I did? Yep. I got the dog. It's an old trick and can be risky. But if you introduce a predator sometimes the mommy-instincts come rushing back and she'll move to protect the babies. Or she'll totally freak out and if you have her in a too-small space she might trample the little ones. So know your dog and your goat. But Darla took the babies back and has been doing a great job.

Wednesday morning I drug a still uncooperative Darla to the milkstand. I figured this was going to be a disaster. But I also knew the power of a handful of cracked corn. She reluctantly climbed up in the stand and started eating while I went to get the babies.

I stuck the little ones on the tap and acted like nothing very interesting was going on while I sneakily snuck a little dish under Darla. Then I milked her. Oh yes I did and she stood there like a champ.

I figured it would be a fight but she either has this momma and milking thing down or she was just so confused she didn't know what to do.

She was still uncooperative on the way back to the Turkey House so I just picked up one of the little ones and put it ahead of Darla on the path back. She hurried along then without any problem.

So that's what happened. But nothing happened with Debbie. Yet. At this writing she is giving me googly eyes and talking to her belly so I'm guessing things will get interesting soon.

Happy Thursday everyone! Did anyone sneak some goats into your yard?

Talk about a plot swing... from Goat kebobs to kidding around. Nice work!

Baby goats would be the only reason I'd have goats. It's just so much easier to buy my little bit of milk I need for soap making. Good thing we have several Amish dairies around here.

You are a goat angel, swooping in to save all - such a hero. Lol about the goat down your front. Ive heard of chicks but not kids.

What a great read, and well done. Hope all goes well with the rest of the girls.

langela, you are very lucky to have those resources.

It's always something, Lynda!

Thanks Vera - always glad to see you and here is hoping!