Yesterday I promised to give the full scoop on how we got the oinkers home and into their new digs. Transporting livestock can be tricky - even if you have a truck. Sure you might be able to get them loaded... but the real fun begins when you get home. 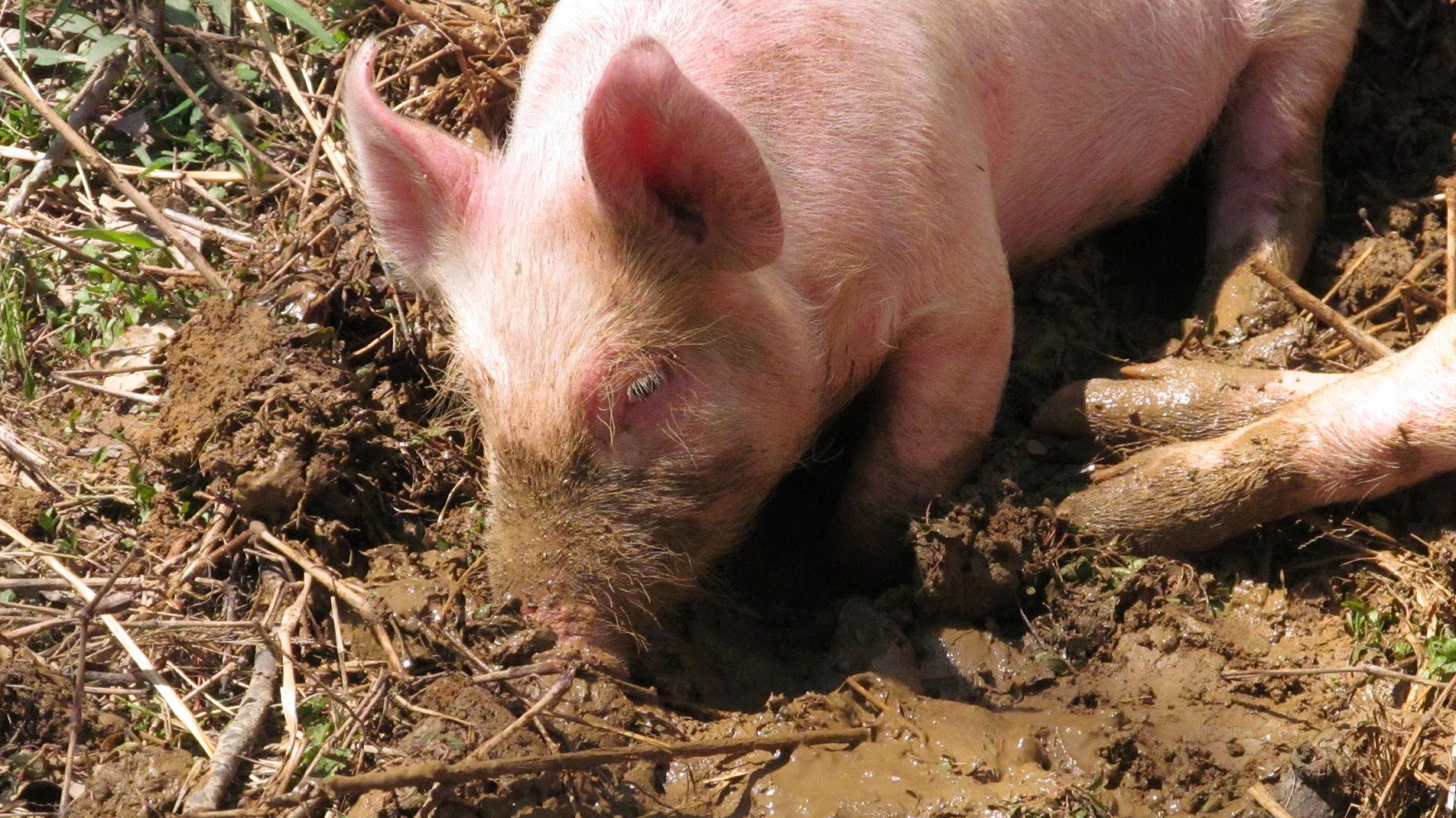 We got the pig fencing and most of the basics set up before we left on the Bacon Express the other morning. This was easy because we just used to lower goat yard - which is where most of our bacon seeds are initially planted. We use this yard because it's easy to see from the house, it has great perimeter fencing, it has electric hotwire already set up, and the Hog Hut 2010 still stands in all its slap-dashed-together, magnificent glory.

Pretty much the only real prep we needed to do was recheck the fence, add a small piece of field fence in one corner, move the empty bee hive (so sad), and go around and find the feeder and waters. Then we put some straw in the back of my husbands crappy little truck with a cap on the back...and away we went.

How did I find these pigz? I asked. They were not advertised and frankly I was starting to get worried. So when I saw a guy advertise a boar.... I sent an email and asked if he had feeders and was he willing to sell? He did and he was. So we exchanged particulars and headed right over with cash. 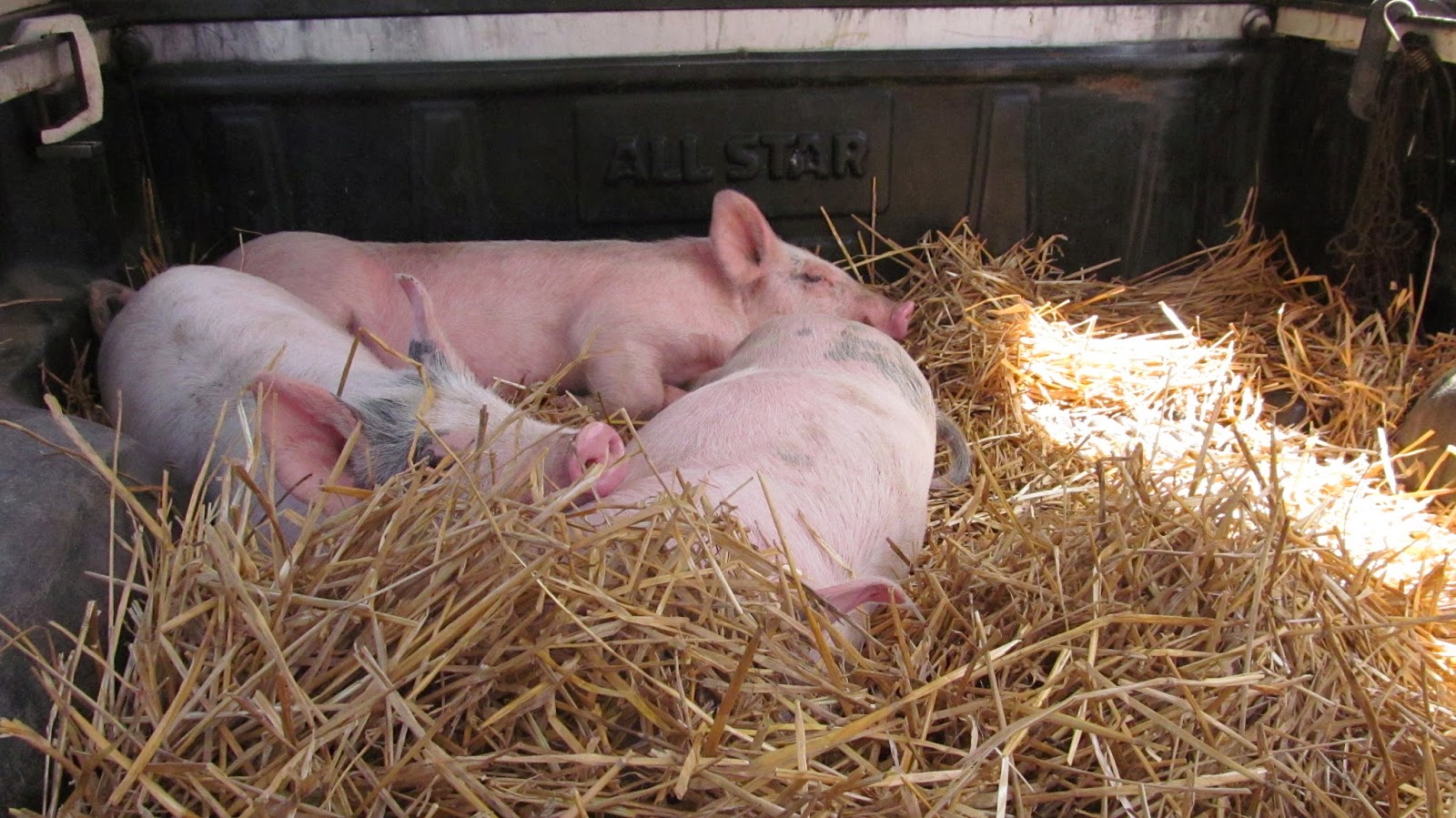 After a short tour of his operation the guy pulled The Three Little Pigz out of his mob of smallish pigs, we put them in the back of the truck, secured the cap door so they wouldn't try to get out, and drove home as fast as we could.

Seeing as it was a hot day our biggest concern was getting them home before they croaked. Pigz are sensitive to heat and since they don't sweat they are hard to cool off. That's why they like the mud so much. But having hot pork in the back of a truck for a pretty good drive was tricky business. This is also why we were ready to get them installed as soon as we drove in.

The first thing I did when we got home and got out of the truck was.... I got the dog.

Yep. I got the dog. The first very thing. Technically I got all of them but I really wanted my Dog#1. I asked him, "Where's the pigz?"

Titan could smell the pigz about 3 miles out so he purposefully trotted directly over to the truck and stood there looking at them, breathing in all their blissful, stinky aroma.

Why did I get the dog first? Because if the pig installation went bad that those squealers made a run for it I knew that I could have Dog#1 "Find the pigz."

Next we got the trash can.

Yep. The trash can. A big rolling trash can is a good way to transport over heated, freaked out meat. 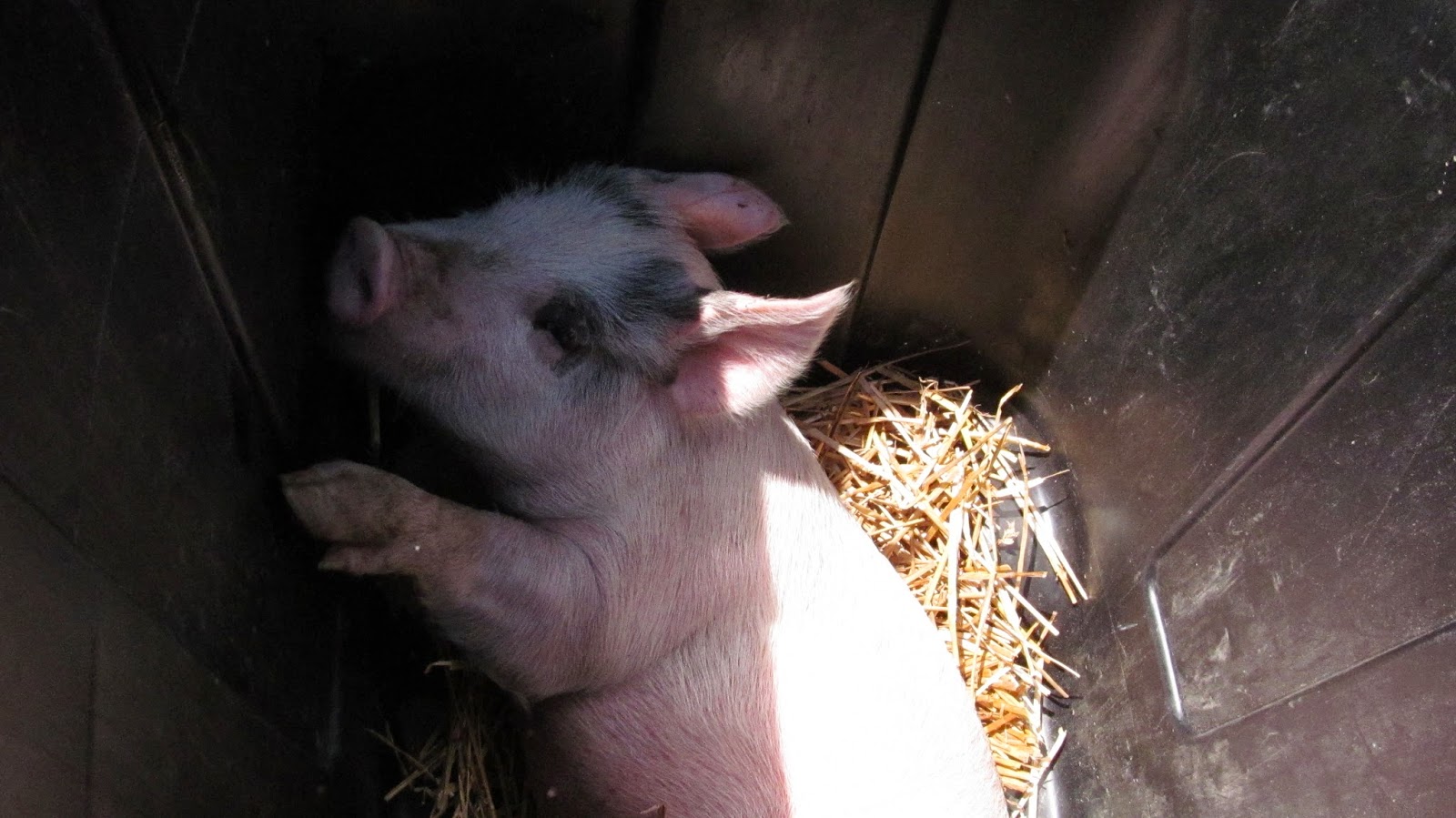 Ham in a can

While I guarded the tail gate the Big Man reached in and grabbed one of the pigz by the back leg.

Yep. That's how you carry them. No, it doesn't hurt them and their back legs are convenient handles. If you don't believe me just try to pick one up like a snugly kitten and let me know how that goes for you.

The first pig was deposited into the trash can and we trundled across the yard, thru the gate, down the goat yard, and then plopped that pig right out onto the ground. He laid there dazed for a while. We went to get the rest of them. 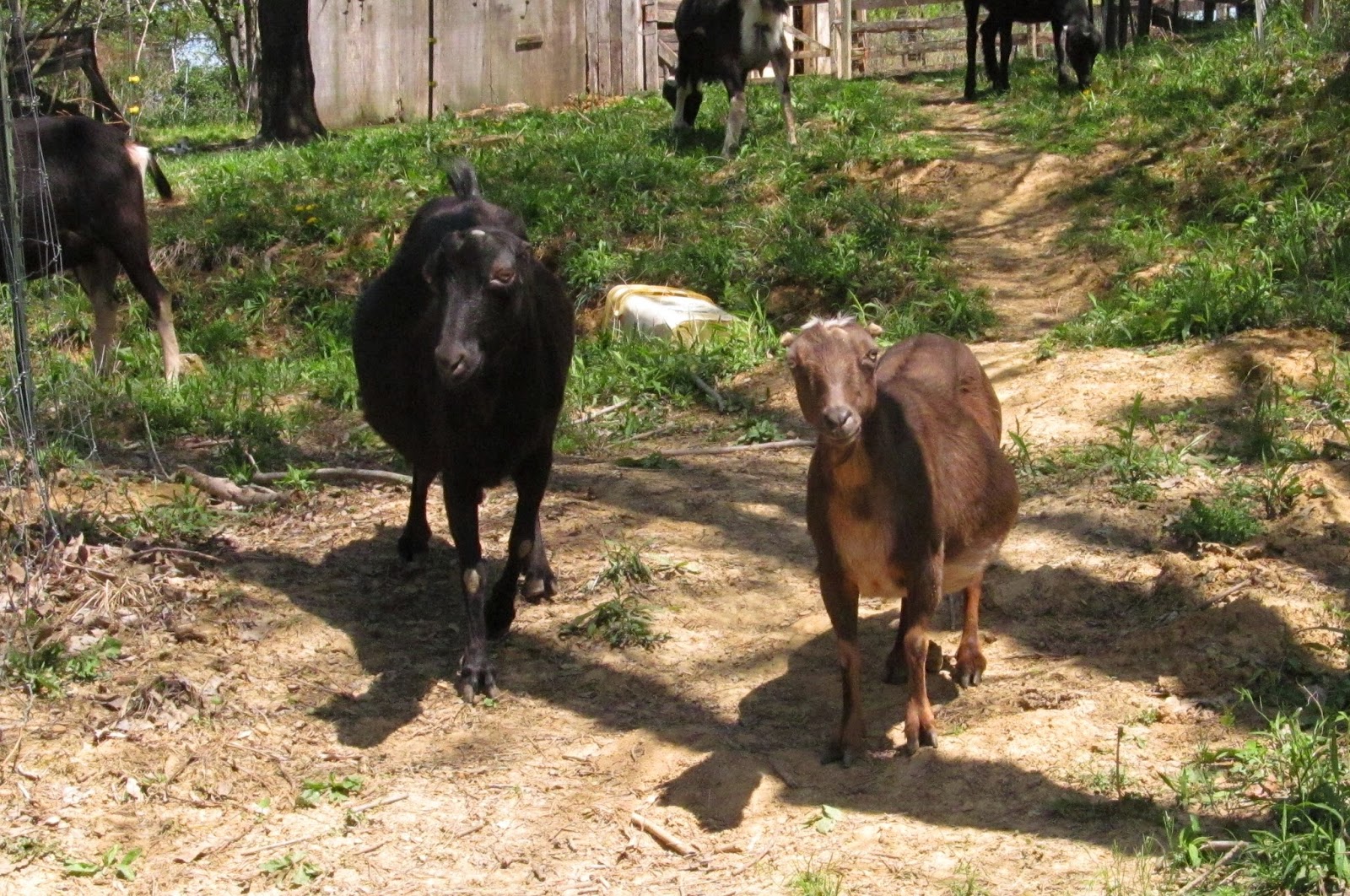 By this time the goats were stomping and snorting and doing that weird alarm-sneeze thing.  They were outraged. The dogs were lined up on the deck thinking this was the best show in town.

The other two pigz were trolleyed across the yard in similar fashion. There were no escape attempts.

Next we got a cool wallow going for them. We ran the hoses down the hill and filled a low spot near the still terrified pigz with water. They instantly flopped over to it and dramatically threw themselves down into the mud. They they figured out that mud was fun to root around in. They were in hog heaven.

Mostly they laid in a heap in abject terror for most of the afternoon. One by one we brought the dogs down to check out the fresh meat. One by one the goats came down to scare themselves and register their formal complaints. Debbie nervously leaned against me and I comforted her by saying things like, "Tough too bads, Goat, get over it." She got mad and stomped away.

We gleefully watched the meat for a while - making sure they weren't dead. When they got a little more active we got them some food then they really thought they hit the jack pot. We didn't bother trying to overwhelm them by introducing their luxurious accomodations.... as expected they just found a spot in the yard, lined up like hot dogs in a package, and went to sleep. They were still there when I checked on them the next morning. 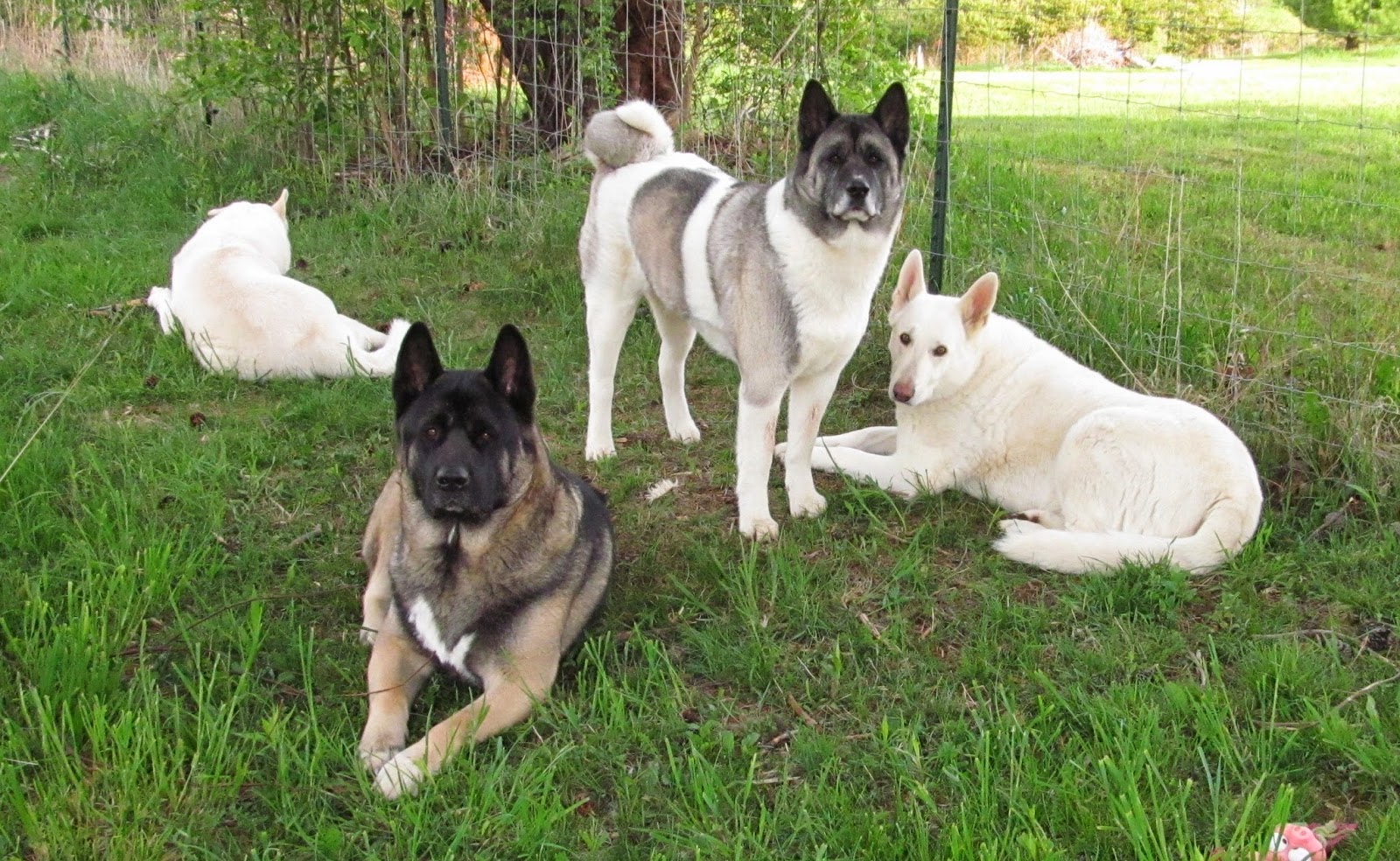 Every time we go outside I say to the dogs, "Where's the pigz?" and they all thunder down the hill and look for the oinkers. Dog#1 is all business, Dog#2 noodles around, and Kai and Zander get that prey-look in their eyes. It's glorious. If the pigz ever get out The Dog Horde will be upon them in seconds. Kai and Zander are already "Guarding Momma" while we are near the pigz so I'm as safe as kittens.

So now our Pig Installation is 100% complete and all we need to do is stand around, feed them out on the cheap, and dream of bacon.

Click here for a list of all of my posts on How to Raise Backyard Pigz for Meat instructions. This page shows everything from what to feed them pigz to how to part up a side of pork to feed yourself and everything in between.

We'll have more as we go along but now I need to get outside. As soon as we walk out I'll ask the dogs, "Where's the pigz?"

Happy Friday everyone! Do you have you pigz installed?

Posted by Ohiofarmgirl at 8:12 AM

"Ham in a can, hot pork, bacon express", too funny! I've never considered raising feeder pigs, but the visuals of all that pork-related food is tantalizing. Hmmm.

Great narration and entertaining. You have certainly got well trained dogs. Pigs are my favourite animal and we often had a litter in our laundry being hand reared when mum didnt make it or was aggressive towards them. Great Post.

Fantastic! Sounds like everything went as smooth as peanut butter. YAY for easy pig installation! Now just watch that bacon fill in.. and dream of meaty heaven! Congrats! No pigs on the ground here yet... hoping our little bacon seeds are growing in the womb. Should know in a few more weeks....but she is looking a little "porky" :)

I hope they recovered from the trip and enjoyed the mud spa!

Thanks langela! and thanks for coming by :-)

Hi Lynda - piglets in the laundry is a very funny thing to think about. thanks for sharing that memory!

hi Nancy and great to see you - they loved the mud spa!

A very entertaining read, and I am glad the pigs are settling in. We are still waiting of our sow to be in pig. It has taken an age for the boar to get her with pig, but hopefully soon.....