Meat management - back to full swing!

After a summer of worrying that we would be meatless at some point I think I can finally relax. Look what happened! 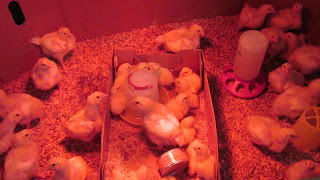 Our most recent meats look huge next to the fresh ones.

As you recall we didn't get our pigz until very late this year. Some of it was because of bad planning but a lot of it was due to extremely bad weather. The early, non-stop rains in June would have caused all kinds of pig problems so we waited on purpose to get the pigz. Then these pigz came to us in an unexpected way -so it all worked out in the end.

But I've been very worried about our meat situation. So that's why we ordered another round of meat chickens a couple of weeks ago. That got us closer to our meat management goals. But I was still concerned.

Then when the pigz made their big escape I noted that they were bigger than I thought. So that made me feel even better about our meat stores. But then something amazing happened.

Thru luck and poor navigation I ended up at Meyer Hatchery! What a great day! I was driving all over the state anyway but then figured out I was close enough to make a run for chickens. So I did. However, I got lost. Real lost. As in... my GPS just gave up on me entirely. So I resorted to old school navigation.

I pulled up, hopped out, and ran into a business that looked like they might know what they were talking about. "Say, friend, how do I get to Polk?" 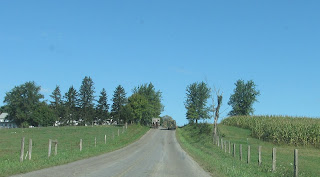 You know you are in Amish country when two horse drawn wagons loaded with the harvest pass each other.

They looked at me like I was out of my mind. Everyone consulted their phones. Now... not that I'm ungrateful but I wasn't more than 12 miles away so it's not like I was asking for driving directions to somewhere in Indiana... I was just going down the road. The younger set looked confused and said they didn't even live around there. An older guy finally came over. He drew me a map on the back of an envelope.


I am not kidding when I tell you that part of his directions were to, "Turn where the school used to be. It's not there anymore but you can see where it was."

I thanked him and headed in the direction of adventure. At some point I almost started crying because I was on a dirt path that -  in an academic sense - had at one time been a road. But then I saw a sign for the town of Polk and so I drove faster. My GPS had curled up in a ball and refused to talk to me. I figured I would wing it.

After driving around a lot in all directions from the center of town, I finally pulled into another business hoping they could tell me where the hatchery was?  She looked bored and just said, "Up the road, same side." 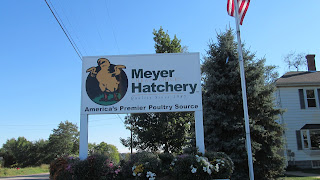 I finally made it to the Big Show.

The shop there is terrific! They have every kind of chicken thing you could possible need. And chickens!

I didn't see any meats in the bargain bin so I asked if they had any extras? Sure! She went in the back and got me a box of creepy meats. I paid less than $2 a piece and was glad for it. 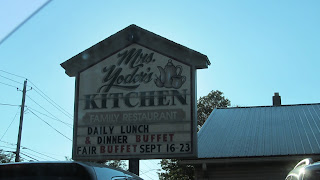 Of course, it was a long long long long long drive back. It was about dinner time so what else could I do but stop at Mrs. Yoders? I laughed about my double chicken day. The waitress hugged me because I was so excited to be there. I was worried about the peeps in the car so I ate fast and tipped high. I left the chicken buffet in shambles.

It was a long drive home especially since I was drunk on chicken. The peeps sang a happy song the whole way home.

Since it was so late when I got home I just set the box of peeps in the brooder box with the existing chicks. When I went out to check on them in the morning I saw that some of the bigger ones got in with the small fries. I had to get everyone sorted out and in their right place.

Now everyone is where they are supposed to be. I re-set up the meat pen made of hog panels and then set the new guys up in the brooder box.

So now I think we are good to go.

Looks like our meat management is back to full swing!

Happy Wednesday everyone! Have you ever visited a hatchery? What a terrific day!

Posted by Ohiofarmgirl at 1:53 PM

We always get our chicks from Meyer Hatchery. Glad you got to see the place in person! Would love to drive up there one day.

We always order our chicks from Meyer Hatchery. Glad you got to see it in person! Would love to drive up there one day.

it was totally fun, Amanda. the folks there were really fun and helpful.
:-D