A lot of people are excited about fall but I am not one of them. Do I like fall? Sure. But to me it mostly just means that summer is over and The White Death is coming. I'd rather have year round spring, summer, and fall that goes directly into spring. So you'll pardon me if my excitement over pumpkin lattes is a little subdued. 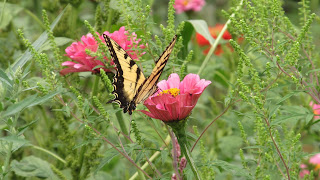 You are either looking at the butterfly... or the weeds.
I can only see the weeds in my end-of-summer freak out.

Fall also means that I need to get my ducks in a row. And when I say "ducks" I really mean chickens. Our meat management this year has not been up to snuff.

We ended up getting the pigz very very late this year. One of the reasons was our extremely bad planning but also because of the "Summer That Almost Wasn't." The constant rains earlier in June were all bad news. Pigz would have been swimming in mud if we had gotten them earlier in the spring. So while late pigz are not optimal from a meat planning point of view - it was better for the pigz.

Late pigz mean late butchering which means we need to make sure we have alternative meat lined up. The other day I was out there counting the last of our meat chickens from spring. We only have six left. We might be in a pickle.

So my highest priority this week is to secure a new round of meat chickens. Actually, I'll probably get one round now and another in a couple weeks. This is cutting it pretty close but we'd rather have winter than summer creepy meats. We find it's easier to keep them warm than to keep them cool - and the fatties really fatten up over the winter with nothing to do but sit around and eat. 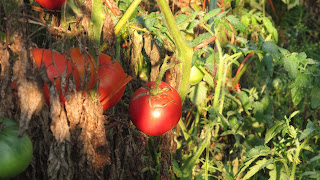 This tomato wants to be picked and canned.

Next, I have about a billion tomatoes that I need to deal with. However, I don't see any time for canning in my near future so I'm going to try something different which is to put the tomatoes in bags and into the freezer. This way I can buy myself some time and do canning later in the fall when there is not a lot going on.

Third, I'm totally off my green bean game. A gal I know grows the best beans in the business and I had hoped to get a bushel from her. But she told me on Saturday that she had picked her last beans and they were already sold to someone else. Rats! So I'll be hitting the auctions this week trying to secure at least a bushel.

Of course, everyone has had a bad growing season so I've noticed that the produce is getting a little thin everywhere. We just couldn't catch a break this summer.

Nothing but constant rain early caused just about everything to drown... then we had dry dry dry conditions. And now nothing but 90* days. We've had a little bit of rain in the last couple of days and thank heavens for that.

I spoke to my orchard friends and they let me know that the little bit of rain we got probably saved their harvest! The apples would have started falling off the trees because of the lack of water...and they can't sell or harvest any apples from the ground (thanks, weird government regularions....). So, for now anyway, they are back in business.

Fourth, I really need to start working on repairs in the chicken and turkey houses. Who knows what kind of winter we will get but we need to get our property ship shape. Right now my work area can only be described as "they appears to have been some kind of struggle." My tools are everywhere and nothing is put away.

And forget any of the building or painting projects we wanted to get done.

Pretty much I need an extra month, in addition to September and October, to be really caught up. And we haven't even thought about firewood.

Fall speeds up before it slows down.

Happy Labor Day everyone! There is no day off around here... this holiday is just another labor day for me. Any one else scrambling to get caught up?

Posted by Ohiofarmgirl at 7:34 AM

Yes I am scrambling. And about the tomatoes...last summer we had the whole non-stop rain thing, ridiculous. I ended up picking/washing a billion tomatoes, and then I just put them for a spin in the food processor, some coarsely chopped, some finely. I froze them just like that. I've used them constantly, either in spaghetti sauce, chili, etc. I even sautéed some with onion, garlic, some of my herbs, and squash (which I froze too). Wonderful!

Carol, what a great idea to use the food processor.. hum..... great thinking!

I am also stuffing my tomatoes in bags in the freezer. We are making grape juice now and will get back to the tomatoes later. We had a dry very hot summer here and I am happy to see the end to it. My flower garden is a disaster area and I can't wait to get the last of the stuff out of the garden so I can release the chicken clean up crew in there. Come on October.

We had just the opposite: no rain! The beans were next to useless - I don't think I've picked more than a couple of pounds, and they are tough and stringy. The cabbages are just the size of oranges, the beetroot all shrivelled up - I've got about 8 or 9 medium size roots. Garlic and onions were all small, despite constant watering, and salad leaves bolted - far too hot. On the plus side, butternush squash/courgettes/pumpkins are fabulous, as were the raspberries and all the fruit, plus huge tomatoes and peppers. Bizarrely, our brussel sprouts are coming on - an essential food at our Christmas lunch as we are Brits, albeit living in France. Couldn't have Christmas without little green sprouts...

PJ - you guys have been thru the wringer for sure. do you do any 3 or 4 season gardening? have you tried a hoop house? i'm going to try it this fall. our winters are way to cold but if we have mild temps i might be able to keep some celery and greens going.

VM - i LOVE brussel sprouts! but i cant grow them to save my life. i have 2 plants left that i'm trying to take care of but they are looking bad. but good on you for all the squash!
:-)

I tried some early spring onions and peas that were enjoyed by the blue jays. This year I am trying some fall carrots that are supposed to grow over winter and some beets for fall. I have never tried a hoop house but maybe that would work here in the fall or even winter. Our winters are not extremely cold and we don't get much snow. The best thing about this years garden is the 4 melons that we grew which actually got ripe.

"year round spring, summer, and fall that goes directly into spring" - that's my climate! We have had a few frosts, but we nearly managed to grow tomatoes year round. Actually they grew better in winter because summer is too hot. Another meat idea is to collect unwanted pet roosters.... I've seen a few on offer lately, and if our freezer(s) wasn't full I would be very tempted.

Well, I had a baby in July and insisted on planting a huge garden this spring anyway. It's a mess. Our quail pen got built this weekend. I need to: deal with the garden, sort out which ducks I'm keeping and move them into the garden for clean up duty, craigslist the spare runner ducks, butcher some hens and can them, move the peeps out of the garage. Can as many apples as possible - our trees are sagging. Make cider. Set up a cold frame. Dig potatoes. I think i bit off a bit too much this year (my incubator came the day we brought the baby home) and yes, another month or two of fall would be awesome. But, this stuff keeps me sane.

Harvesting like mad, The ginourmous wall of green beans gives me a kilo every 3-4 days.

Tomatoes- I froze some, also shortcutted the canning - by only quartering and coring - about 6 lbs - bring to a simmer with a little water, run through a food mill for the skins and seeds, cook down then can. More to do.

Eggplants are out of control, have never had such a harvest, and kale, collards, and sprouts are rambunctious as well.

Funny how my day job is prohibiting me from getting my garden and winter preps done.

Finally cooled off up here. gonna be a gardening weekend!