The morning where sinners had to stay home and fix the fence.

Today was the morning wherein I was late for church because the pigz got out of the fence. Sinners had to stay home and get the hot wire fixed. Also, Zander brought us a headless snake. I was fairly certain I had read about this day in Revelation. 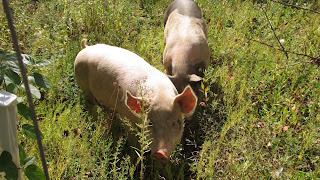 There they are repeat offenders. Recidivism.


Of course, I had to report to the pastor why my husband was not there this morning. The pastor more or less agreed to hold a special alter call for Husbands Who Should Have Listened next week. We'll see how that goes.

While I was gone The Big Man got the fence all fixed up. Shortly afterwards the pigz lost interest in getting out of the fence entirely. 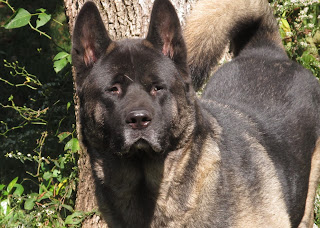 The Dread Commander Zander. Does not think pigz are funny. Snakes are kind of funny.

The first thing that happened on this Day of Days was that Zander brought us a well-dead snake. Headless, such as it was. There was hopping around and squealing. We took the snake from Bubby and tried to distract him.

It didn't work. But Bubby's attention was turned toward the hog lot once we started doing chores. The pigz were out.

I got My Most Excellent Good Dog and we escorted the pigz back into their pen. I asked my husband if he was sure he shouldn't just stay home and work on the electric fence? Nope. I shrugged and went about my business. 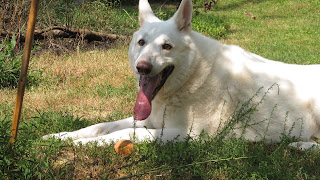 My Most Excellent Good Dog. With his ball. That's all he ever wants.

Just before we were supposed to get in the car I looked down the drive and the pigz were headed out of Dodge.
"HONEY!"  I yelled, helpfully. "THE PIGZ ARE OUT! Again."
I got the dog again. There was running. And chasing. And soon My Most Excellent Good Dog got the pigz out of the woods by the driveway and got them headed toward my husband. The pigz followed The Big Man while me and the dog kept nipping a their heels. My mean looks and the dog's wolfish grin kept them pigz hustling right along.

"I imagine I'll just stay here and work on the fence." The Big Man said. I just nodded.

So all's well that ends in electric fence. When I reported the events of the day on 'the facebook' I was glad to see I was not the only one who was late for church because the pigz got out... or that the sheep were playing hilarious pranks on others.

Slow walking malcontents. Do not think the dogs are funny.

The dogs and I just went down and made sure the pigz were still in the fence. They are.  So we are once again at Pig Containment level 100%. The pigz, however, were wary to come out from the bramble. They knew the dogs were with me. They have had plenty of Dog#1 today.  Frankly, I've had plenty of the pigz today. 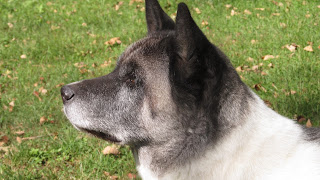 My beautiful Kai. She smells something. Could be pigz.

Happy Sunday everyone! Were you late for church because of escaped livestock?

Posted by Ohiofarmgirl at 5:15 PM

Hope those pigs stay put. Our sow is in with the boar again so hopefully in a few months time we shall have to fight the battle of keeping piglets contained!