Pigz in a new pasture.

Moving the pigz was easy enough... that is... after they got over their terror of the electric fence. It took them a while to realize that not only was the gate open but that the hotwire fence was gone. 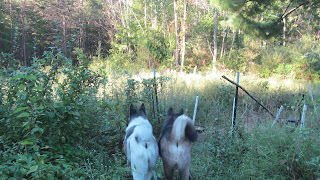 This is the before shot of the new pig pasture. Also, dog butts. I see this view all the time.

Then it was just a matter of them being curious enough to make their way down the path and into the new pasture. The Big Man just started setting up the pigz waterer and food bowls in the new place and the pigz headed in the direction of fun and adventure.

Moving pigz can be difficult. We've found it's easier to make pigz think it is their idea to go to the new place and that it is super fun.... as opposed to chasing them around and making everyone unhappy. My husband had mowed a path across the field connecting the old and new pig pastures. They walked right down it. 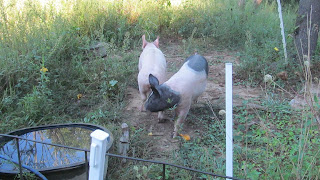 The only bad thing about the new pasture is that we have zero electric set up. This could be a problem and we really need to work on it. However, these pigz are not very aggressive and are kind of laid back...unlike the mean pigz we had that climbed the field fence like monkeys.

The morning after the big pig move the dogs and I ran right down to make sure the pigz were still there. Zander and Kai didn't know that we moved them so they were very interested in what was rustling around in the field.

One of the things I love so much about Zander is that he is very bold. He charges right at whatever is coming at him...and then he pees in it's general direction. It doesn't matter what it is... he'll pee at it. And not break eye contact. He is very dominant. He's our big Bubby. 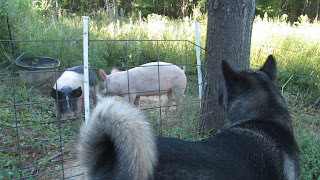 One of the funny things about Zander and Kai is that their tails curl tighter in the face of adventure. Or danger. Here you can see that Bubby's normally "saber" like tail is in a tighter curl.

What about my Dog#1? Titan knew that the pigz were in the new pen. When I asked him, "Where are the pigz?" He cut his eyes at the new pen and trotted right down there. Kai was sniffing the ground everywhere and wondering what goings on had gone on the night before. But then she realized something was in the bramble and headed straight towards them.

Pigz are moved - mission accomplished. Now we need to work on the fence.

Happy Wednesday everyone! Are your pigz moved onto the new pasture? Did you have any trouble getting them there?

"in its general direction" I got thet reference!

:-) i thought you might! ha! hey since i have your attention.. tell me more about this roasted vegetables + mayonnaise? at first i thought.. what??? but then last nite i made a salad and used some of the veg....and used mayonnaise as the dressing and it was delicious! so... do you put the mayo ON the veg before roasting? after? i must know more!

All our pigs are inside their paddocks, but we have a young calf who thinks that she can do as she pleases, so refuses to come in from the field at night even though her mum is already in the barn. Blue, one of our rotteillers, now 'helps'. It is surprising how quickly the calf lets Lester put a rope on her once Blue comes into view! Stops him from having to chase the calf round and round and round the field until both of them get out of breath. A few evenings of Lester being replaced by a huge black dog chasing her has soon made the calf realise that sometimes it is better to give in and be roped!

After! It's a Dutch and Flemmish thing deeeelish, but it took a while to get uses to! I'll tell all in a post