Editor's note: I tried. I really really really tried to write this without all the rude jokes. But due to my extreme immaturity I just couldn't. Decent folks should probably not read this. Come back tomorrow and we'll talk about serious farming things. 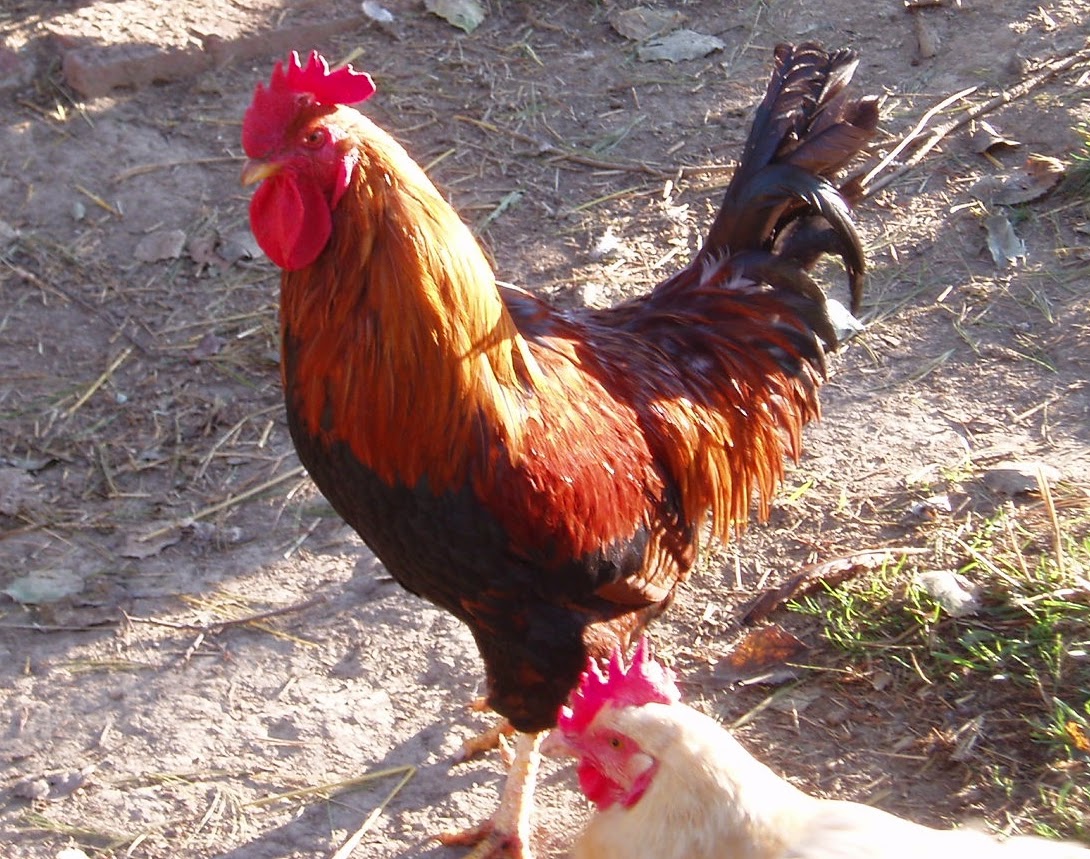 Fred. The dread roo who served our flock for many years. Gone all these long years. I still miss him.

There is no easy way to say this, friends, this weekend we were lured with pizza to go and get some strange cock. It turns out that some folks we know have neighbors who found out that having a rooster isn't always hilarious. While we had sworn off being the dumping ground for other people's problems that pizza sounded pretty good. And you know what they say, even bad pizza is still pretty good. So we went.

Their voices got more shrill lately and they had wound themselves up into a fury and said the neighbor's needed to get rid of of that rooster before it killed someone. The way they talked about it - this was Beelzu-Bird himself.  Finally their sad and scared faces wore down our good judgement...and there was that pizza to think about.

As it was the pizza was pretty disappointing. There wasn't even dippin' sauce for it. And it wasn't hot due to some kind of long and convoluted explanation. But we are always grateful when someone buys us a meal. So mostly we just hoped that the bagged salad they served us wouldn't kill us with ecoli. We determined to move the day along and said we should get on with it.

We went over to their neighbor's ready for violence. When we arrived  we were well warned that The Terror Of ThatOtherCounty would likely kill us. Everyone - including two grown men - had been chased by that mean roo. We surely didn't stand a chance, they said.

So desperate were their cries of terror and lamentations of approaching death that we were starting to wonder if we should have brought a gun.... or the dog.  Or maybe even my axe.

As it was the neighbor lady, owner of that bad hombre roo, came out holding a string with a very small dog attached to it. She was wearing colorful barn boots will little duckies on them.  My husband and I looked at each other and silently agreed that these were probably not people on our level of rooster handling professionalism.

We left the tactical gear in the car and asked to be shown to their coop.

The folks we know, along with the lady in the ducky boots, were practically shrieking at us that we should be careful! Doom! Doom! DOOOOOOM awaits behind that closed coop door!

Always cautious we prepared to meet our foe. The Big Man led the way with me, one hand on his back, following close behind. He held up a closed fist signalling for us to "Freeze!" We both froze, crouched low, and listened.

Silently my husband signaled me to cover him while he breached the door and that we would use Offensive Operation Delta Zed to extract the target. I nodded.

We both knew to meet back at that rally point if this operation went sideways..... and of course, it was understood that we never negotiate with the enemy. It is well known that have a standing order to always shoot the hostage if one of us were captured. We understood the risks.

The on-lookers had moved back behind our safety perimeter - but were clutching each other and screaming.

My husband flung open the door and was first into the breach. In one fell swoop he snatched up that rooster in one try. He walked out of the shed and victoriously held up the Beast Bird. We gave each other the side eye.... El Grande Gallo was a 3 pound micro-roo.

"Are you kidding me?" I asked.  My husband, man of action but of few words, just huffed.

He tucked the little rooster under his arm, pinning it's wings, and walked toward the terrified crowd.

The onlookers were shocked and amazed. They muttered to themselves about how they were very nearly killed by that bird, how it had chased someone's grandpa, and how for months they had not even been able to go out in the yard.

They had never seen professional rooster handlers nor had they ever seen a rooster grabbed right off his perch with such precision. My husband is a master of the cock snatch so he didn't have any trouble at all. They couldn't believe it.

"He's....he's not even trying to KILL you?" Exclaimed the lady in the ducky boots incredulously.

I've known my husband for a long time so I recognized his clipped response "No" as him being already tried of their foolishness. We walked, uneventfully, back to the car where my husband unceremoniously shoved that little rooster in to the pet carrier in the back of the car.

Frankly we were more than a little miffed by the whole thing. We are generally annoyed by people who shirk their responsibilities..... like not being able to handle their own rooster. Livestock isn't a game to us and being whipped into a rooster frenzy, expecting death and violence, over a smallish bird just kind of makes us mad.

Farming isn't all baby chicks and sunshine. You need to be able to either manage your mean cock or send him to glory - not foist your troubles on some fool who was promised pizza. We felt hoodwinked because that little roo was hardly big enough for dinner. We'll have to butcher one of our other roosters to even make a full pot of coq au vin. This was hardly worth our time.

The parting shot of the day was that as we were saying goodbye to them my hubs yelled over his shoulder, "Thanks for the meal!"

He meant, "Thanks for lunch, people who bought pizza" but the rooster's owner started crying.

I tried to soothe things over but she didn't know about the pizza and only thought we were being mean and were gonna run right home and fricassee her little rooster friend, who we found out was named Buddy. I wasn't doing a very good job of consoling her so we just both hopped in the car and drove away as fast as we could. It was a very very unsatisfying day.

We we finally got home we had to watch some really violent shows and have some booze. We were promised hand to hand combat with a Devil Roo and all's we got was cold pizza and a fluffy fancy show rooster.

I couldnt make this up if i tried.

Happy Monday everyone! How about you? Can you handle your rooster? Can you cock-a-doodle do?

That there are people who can go through life completely unable to learn anything from an animal is just...I got no words. Okay, I got words. Where knowledge should be in their skull is place held by fear. And cold pizza.

That there is some funny stuff. Thanks for the grin.

Funny story! My sister and I were once chased by a devil turkey. He was truly evil though
.

I think I burst into laughter 4... wait 5? times while reading this. I am waaaay too immature to even speak the "c" word out loud with a straight face. Ha!
BTW, what DID you create with poor, sweet, misunderstood Buddy?