Look! Its a goat doing what goats should do - get out there and free range because its FREE! 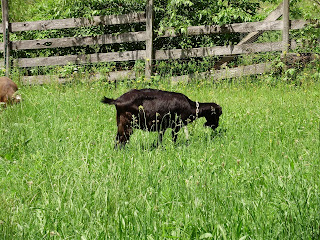 Debbie being a goat...and hey! There is Nibble's in the background
So here's here:

*The dang ducks have been giving me a run for my money and have decided they don't want to roost in the duck garage at nite. I even sent the dog in to chase them out of the pond the other night...it didn't work at all. Thankfully everyone was there the next morning. Whew!
* Puddles the duck has turned into a tiger and has decided that's her nest and everyone had better stay away. She comes off the nest to eat, show the boys her tail feathers, then screams when they chase after her. There is a lesson there somewhere...
* ... then we found a heap of turkey feathers at the gate. Fortunately Bramble came out of the brambles... she was still scared and missing a big bunch of feathers but it looks like she was able to get away from Foxy Brown. We scooped her up and moved her, and her newly found nest, into the front brooder.  She is totally ticked off but will have to sit down eventually. As our best turkey hen, she'd better!
* We lost a turkey poult to Public Enemy #1... that's a water bucket, friends. The most dangerous thing in the barnyard. A sad find indeed.

But I have managed to get a few things in the ground.
* The hillside (west) garden is planted in entirely! And fenced. I need to remember to plant some radish seeds with the squash to scare off the squash bugs.
* Two sections of tomatoes - Tula Blacks and regular old Romas.... with carrots and onions planted nearby.
* Dahlias:
East side of tomatoes in square garden: Jean Marie
West side of tomatoes in square garden: LeBaron
By Lemon Balm: Blue Beard
South side of tomatoes: Purple Gem and Lace White
* And nothing like tilling like a demon...as I have. More planting tomorrow, folks!
Posted by Ohiofarmgirl at 9:05 PM

Debbie is just beautiful! So sorry the fox is visiting :( But I'm happy he only got feathers. Y'all are busy, busy, busy! And you'll reap the rewards. I envy you!

A fox visiting? What is your plan? Could it be the bad neighbors dog?

Someone said we were 'busier than a one legged man in an ass-kicking contest' ....and I believe they are correct! Good to see you B2B!

hey Chai Chai! me and that Foxy Brown are gonna go mano y mano very shortly...grr. And we've seen her with our own eyes - IN our turkey yard!

Well the problem is that her den is on the (good) neighbor's property..but she does her shopping over here. I found out thru a game warden that I can have a licensed trapper come and ..ahem.. legally take care of her. We don't want to use a snare because of all the barncats and foxes won't be fooled by a box trap.

We are also going to run more electric - especially around the poultry yard. But its insanely frustrating -- that fox got Mollee, one of my favorite ducks.. and the attack on Bramble happened in broad daylight. Of course both happened when we weren't here. Dang!

Or I'll build a moat and fill it with alligators.