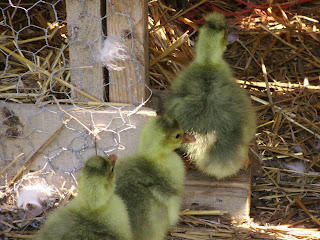 The Meeps on the move - so much toddlin' around today!
Today was sweltering. I was glad for this longest day just so I could get up and out early to get a few things done before the heat was too bad.  I finally packed it in at 3pm when I realized I hadn't eaten my second lunch. So I went in and had pie. And ice cream.

I try to get the 'hard stuff' done in the early morning. Mostly I've been weeding and getting this and that done while I have a bit of a lull...which won't last but a day or two. But I couldn't hardly get much done today with all this cuteness going on! 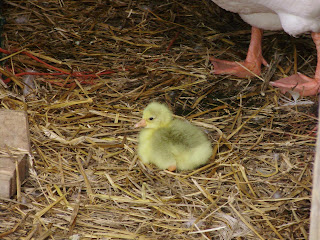 So little! What an adorable bit of fluff!
The Meep Attack has continued and we have 6 little fluffy goslings out there. To my admiration all four of the adults are taking care of the babies as a team. Several of the  little ones went and snuggled under Penny (who's eggs have not hatched) while Cindy Lou tended to the last of her eggs. Then OD and Junior (the ganders) took four of the six out to splash around in the upside down lid filled with water and to show them where to get some yums. They pecked at the chick feed and struggled with pulling up blades of grass - mostly they pulled themselves down. I could watch them all day. They had a lot of fun and nothing is cuter than a little gosling when she yawns.

We'll have to take up the rest of Cindy's eggs either tonite or tomorrow. Penny didn't sit down until about 4 days after Cindy so we will give her a few more days. Eventually the mommas will know the eggs won't make it.. or they just have to concentrate on the live, hatched chicks..and they will get off the nests. Cindy was up for most of the day - so we think she is done with the eggs. And she needs a clean nest for her babies. 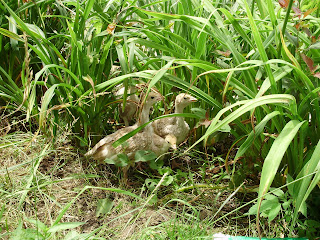 Jungle poults - so much to see in the world
On top of that, I let Turkey Momma take the poults on walkabout in the front garden. They loved it and could enjoy the cool of the grass. The Whole Wide World was like a jungle to the little ones...and Turkey Momma was glad to get outside. Letting the poults out while they are this young is a risk - they don't have their immune systems built up...but it was so hot they needed a break.

But wait - there's more... the ducklings crammed into a tub and splashed around. They loved the splishin' and the splashin.'  They are almost all feathered out but they are still cute. 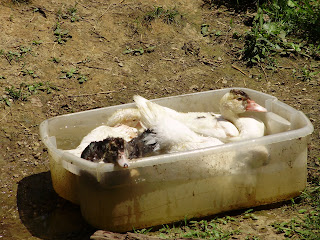 Rub-a-dub-dub, four ducks in a tub
When I finally quit for the day, one of our inside cats, Peeper, told me to relax.... so I followed her lead and we watched some shows online at hulu. 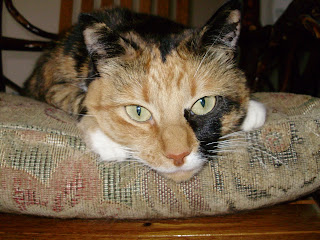 Peep beats the heat by reclining her in favorite chair all day
The only one who wasn't cute..... was OD. This daddy gander wants to kill me now more than ever.... but I still love him. Very much. 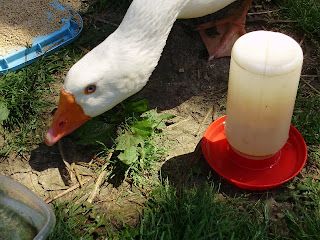 I ain't gettin' near that.. but one day.. maybe one day....
OD, why can't you just accept my love and snuggle me!?!  He's so protective of the little ones that he actually attacked, with malice, a bale of straw. For heavens sakes.

Ready for the heat tomorrow?  Keep cool everyone!
Posted by Ohiofarmgirl at 7:02 PM

Has OD killed anything with just his gaze yet? That's quite the stink eye he's got! I find it so amazing that the ganders take care of the littles. I'm still trying to figure out if my drakes are trying to protect or kill the babies. I need a duck body language specialist, LOL.
-Java

I know - his steely gaze could drop a Mac Truck. But I love him so much....

The ganders are great parents - really its amazing. I think I said somewhere that they act more like a herd of elephants instead of poultry. They know and remember their babies....and will do anything for them. Its extraordinary.