This morning the sun was up and so was I. It starts early these days, the cats start bopping me on the head about 5am. I can hold them off for about 45 minutes but then I gotta shake the cats off and just get up.

Shine was already out there and ready for action. He was eager to get out there and help me start planting. At least.. he was digging in my garden...I thought he was helping me... hum... 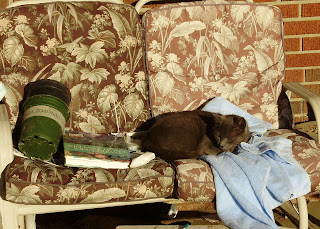 Our Shine, King of Barncats - A fireball of energy
This is how the day really starts.... 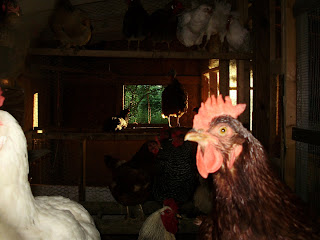 Hey you chickens! Get up!
That crazy hen in front is Henrietta, my favorite hen of all time.  But see Runner, the Bourbon Red turkey hen, on the roost in the background? She's screaming at me to hurry up and let her and The Kindergarten out.  She's the turkey hen who hatched a clutch of chicken eggs...and then I added 4 more chicks I got at the feed store. She's a great momma.

On to business... so yesterday was a big soaking rain so no work for me to do outside.

But today tons or progress:
- Upper garden: planted another row and a half of blue and red corn; really this is the final row. Unlike that other final row of corn. It starts at the big sunflower
- Pumpkins (sugar pie) planted just below corn and just above standing row of buckwheat which I'm leaving for the new upper hive of bees and to improve the soil. Planted radishes to (hopefully) keep the stupid squash bugs away.
- Cantaloupe sprouts were planted at the far end of the upper garden - I used seeds from the best melon I ever had - purchased from an old timer's farm stand last year. I hope it works! And that the bunnies stay away from them until they are big enough. Planted giant grey stripe sunflowers with them and covered with buckets and wire baskets.
- Need to plant turnips between the rows of corn - not sure if this will work but might as well try. Have knocked down most of the weeds between rows. The corn is planted closely, but really - I didn't expect them to all make it. So far most of them have come up. All corn has been planted in groups several days apart.
- Planted the new dwarf pear tree "Moonglow" in upper garden at extreme end near fence.  The existing standard pear is booming with fruit. Should be a good year. Not sure what is happening with the apricot/nectarine tree. Most of the fruit is missing and I'm wondering if the deer are getting them. Hum.
- I found the green maters! Planted behind the tomatillos in the upper garden in the pepper section.
- Watermelon will be planted just above the potatoes - also booming.
- Started 3 new flats: golden Hubbard squash, lettuce, and eggplant and kohlrabi. My eggplant sucks so far and I may have missed the opportunity to start from seeds. Need to get some nursery starts of eggplant.
- Planted dahlias in front of peonies and prepped area behind for more peonies when they go on sale.

This was the scene at mid day. We had a spectacular blue sky day.. tons of sunshine, low humidity...it was so beautiful I didn't even mind heat. I could practically hear the garden growing. 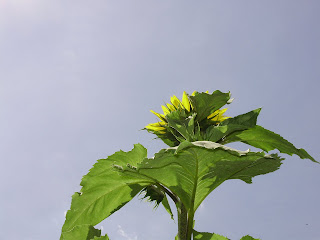 I love sunflowers... especially these sky high giant ones.
And then we went to town. When we got back and settled I realized it was almost 12 hours later than when I started this morning.  And there was Runner and The Kindergarten. 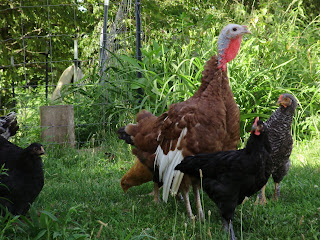 We don't call them The Kindergarten because they are a joyful group of little ones.. but because they are as wild and unpredictable as a "kindergarten full of flying monkeys." The little black and white one on the right is a pip. We have to chase her down every darn night. She's always surprised she has to go in and roost with everyone else. For heavens sakes.

As I was making the final rounds I spotted the first green beans! Nothing is fresher and more green than a raw green bean right from the garden. Ahhh.. tastes like summer. Got more canning jars yesterday so I'm ready for canning action!

An aside.. wow!  The butter I shook up yesterday is fabulous. Spread thickly on bread with a shake of sea salt.... just heaven. Oh, and check out these loaves.. they were a vision and just as delicious. Still not convinced to make your own bread... behold: 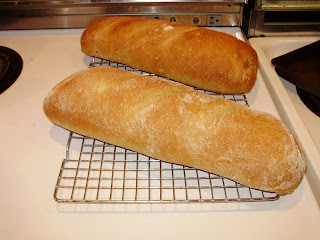 Get out there and get bakin' folks! But get your planting done first (early)!
Posted by Ohiofarmgirl at 10:21 PM

HA - I just enlarged the picture of the chickens in the coop and noticed that there are at least 7 chickens in the rafters. I guess you need to make sure to wear a hat when going in there.

Actually, thats our "upper" roost! Its the best thing we've ever done in the hen house. The lower roosts are just old ladders with scrap wood for legs.. but the upper roost is a 2x2 screwed into the framing of the coop. Hens like to feel like they are tucked under close to the roof (an old timer told me this) so having this upper roost is good for them - and we can "stack" them with one of the lower roosts positioned so that no one from above can poop on the lower roosting hens. Saves floor space and makes everyone happy.

The "top spot" is the center of the upper roost (that's where the #1 Rooster sits) and his favorites fight over who gets to snuggle next to him.

Amazing what one can learn by asking the right question, I had previously looked at that picture several times and didn't think to comment.