The new hive of beez has a new home! Well, really an addition... in the buzz biz they call it a "deep"...its the new second story: 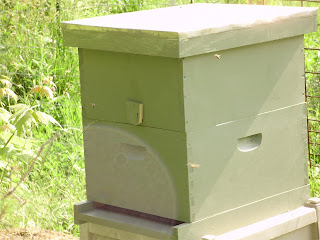 This is the hive The Big Man captured from the old farm a couple weeks ago. They are doing great. We are leaving the white clover grow out in the grass so they can have lots of food. And its less mowing!


Farm Notes:
* Yesterday I got a few things planted in between the rain rain rain including the cabbages behind the kale, the gladiolas (coral), another row of pumpkins, more sunflowers, and a new patch of dahlias.
* Don't let me forget that the crazy blue pumpkins are beyond the fence toward the road, and in the bee garden..and that one that wont work at all in the hillside garden.
* A few flats: scarlet runner beans and a 2-section flat of jalapenos and lovage (herb).
* Today I got another load of gravel to help with the mud mud mud  in the front and square gardens, a new path within the front garden, and I'll use more to make a gravel patio in front of the house.
* One flat of spaghetti squash and sweet bell peppers - I got each pack of seeds for $0.30 each! I love end of season sales - around here all the planting ends in June, but what a laugh... you can plant all season and so I do. I also scored some eggplant plants (because my seeds were a bust) for cheap cheap cheap.
* The only loss was my huge sunflower... it flomped over in the storm last nite..the roots were ripped out.
* Everything is booming! The corn is flying out of the ground, the squash is screaming along, and the onions just might make it this year. I am an onion menace but this year.. its going to work.

Here is something cute..and I wish I had pictures. Yesterday Miss Duck took her ducklings to the front yard. Normally OD and Junior (the junior gander) just hang around waiting to see if Penny and Cindy Lou get up from their nests for a few minutes each day. OD raced over to the ducklings.. and the dogs and I started charging down the hill... and OD just stood guard over them! He took care of them all day and they just toddled around having a good time. It was amazing. You might recall that I had considered giving OD and Penny a duckling to raise - as it didn't look like they were going to hatch their own goslings this year...but then Penny sat down and we are hoping for the best. In goose years, Penny and OD are pretty old.. and Penny is so wonky I'm amazed she is pulling this one off.

For all their faults, geese are incredible parents. They are completely devoted to their little ones. We should have "Meeps" -- which is what we call the goslings -- this week! Come on Cindy and Penny!

Look out for the rain! But get out there between showers and get your planting done.
Posted by Ohiofarmgirl at 6:48 PM

Here's hoping for some Meeps for ya! I've got 6 witty chicklets following their momma around and two other hens who should be momma's soon. A new litter of baby rabbits and my garden is bursting! The Youngun and I just finished picking green beans and are getting ready to get them snapped and canned. It's a good day! ;)

Hey GW! Don't you LOVE green beans!?! I was just standing out there in the garden having a few myself.. within the next week I'll be following your canning lead!

Yes mam I do love them! They are soo very yummy and we eat them almost every....single....night! LOL! I got 7 quarts and will do another pickin' in a couple days. My beets and carrots aren't making just yet, but they take awhile. The corn is tasslin' and I can't wait to eat that standing out in the garden. I just love raw sweet corn!

Sorry to hear about your sunflower loss, they are so wonderful and majestic to view when in full bloom. Someday.

Maybe you need to pick up some goose eggs and stick em under Penny - OD needs to train his replacement to keep you on your toes.

I guess I misread this the first time, good luck with the upcoming "meeps".

No problem! I'm really hoping for the Meeps today or tomorrow.. but sometimes geese have a broader range of incubation than hens, which is usually exactly 21 days.

Penny and Cindy Lou have been getting up regularly so they are doing great. And OD really loves hanging around with the little ducks.

And I intend an intensive 'snuggle program' to train the Meeps to LOVE me! HA!