Honestly this has been the most ridiculous day and I'm TTTT (short hand my pal and I use to say we are Too Tired To Talk/Type) to explain it all. I"ll let the pictures tell most of the story.

In short, I started the day by digging a hole to China...and ended it with a baby goose rescue.

The Meep Army continued its invasion brandishing its weapons of cuteness and snuggle-ality. They slew us on every front. Seriously - look at this little face: 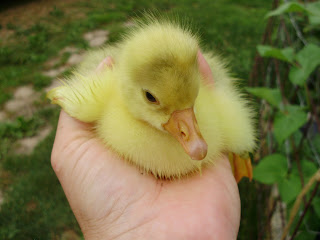 See how big they are! The baby turkeys were little puff balls but these guys are ginormous! 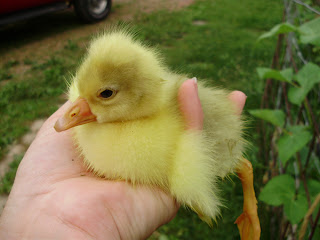 The little Roman tuft is killing me - how cute is that?
After the initial barrage of cuteness the other day, the Meep Army sent in its rear guard - those held back for the final crushing battle of adorableness.  This is their leader: 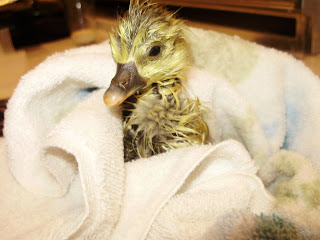 I refer to this noble foe as "Little Black Beak"
His cute vortex was the worst to repel.... resistance is futile! This late arrival showed up unexpectedly. Hidden like a Trojan Horse, he hatched out of an egg we thought had been cast out. Fearing he would be chilled as the rest of the enemy forces were out performing training maneuvers, we created an extraction strategy and went in under cover.

We were foiled as the adult geese saw thru our flimsy plot. They didn't buy our story that we were there to inspect the roof for a second. They attacked. We reformed the ranks, immediately creating the "testudo" or tortoise formation and... huh? What? You mean I'm the only Roman legion battle strategy nerd out there? For heavens sakes.

We used a snow shovel as a shield and we crashed into the enemy lines. While they were distracted by the shield I reached under it and snatched up and took this little one prisoner to be interrogated later.

He must have been a counter intell agent as he didn't reveal a word about the next wave of invaders...but I ended up giving away all of our plans. It was the little squeaky toy noises... I folded like a lawn chair.


The last assault was executed badly. This final troop arrived on the scene really late and had a hard time escaping his war pod (egg). Infra red revealed he was cool and weak. He must have been "black ops" as his own army disavowed all knowledge. We demanded the prisoner and found him in bad shape when we took him into custody. So I did what any decent farmer would do....

Ladies, I'm here to tell you that your bra is the best place for little creatures who need a warm up. Fellas, go and find your woman. You can explain a lot of things but not a goose in your briefs. I say no more about this.


Back to our prisoner - we got him warmed up and he's drying under a warm light in the basement. The adults didn't want anything to do with him - probably because he was so late to hatch and the other babies are already up and around. We'll see if they will take him tomorrow. In the meantime, I'm swooning over the little lumpkins.


And for some reason, I had a hard time doing the dishes today..... 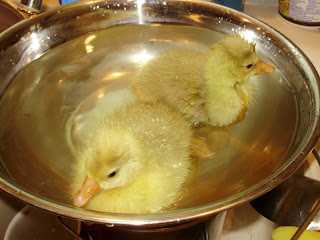 I don't think any explanation would be adequate for this.

More from the cuteness battle front tomorrow....
Posted by Ohiofarmgirl at 9:50 PM

I'm glad I'm not the only one sticking things in my brazier!

(Hey it is me BBH, I had to publish anonymously for some reason.)

Hey BBH! Nope ... its just what we call them... and the funny noises they make. Officially they are "goslings." We are silly with love for them!

And yep - pretty much everything goes in the bra. Need a snuggle? Come on in. Cold? Come on in. Need a ride? Come on in... I actually learned this from a woman with a HUGE bosom who worked at a vet office. She walked around all the time with kittens and puppies in her bra.

Thanks for the good advice, and the much needed laugh. "Goose in your briefs...." I laughed, oh!, I laughed! Clicked through to this one from your post today on the turkey, btw :-)

thanks bethanial11! yep they are the dickens and nope you cant explain some things
;-)