How to Smoke A Duck

Editor's note: It goes without saying that I am not mature enough to do this post. We'll just try and muddle thru. In the meantime, lets get the obvious joke out of the way....lets all just say it together "Smoke a duck? How do you keep it lit?" There. We said it. Its stupid. But its still funny.

If you don't have ducks for your backyard for barnyard you need to run right out and get some. Now. Right now. For snuggling? Slug, bug, and snail eating abilities?

Friend, I am telling you that duck is the other red meat. You have to try it. If you don't believe me then run right out and get one. There are probably tons of frozen ducks on post holiday sale at your grocery store. Try one. Once you are convinced, then scan Craigslist or just order a heap of ducks from your closest hatchery. They are basically "bomb proof," as my pal L says, which means they are pretty hardy, they are easy keepers, they mostly feed themselves, and they breed like rabbits. For my money they are the cheapest thing in the barnyard.

We had a duck harvest recently. They were just delicious. The harvesting is different from chickens.  Mostly, the plucking is ridiculous. We are the World's Worst Pluckers. And after about 10 minutes I get bored. Feathers get everywhere. Its a big disaster. So normally I just skin and not pluck. But wow we had a beauty that begged for plucking. So I stood there. A wise man once told me there are not enough hours in the day to pluck a duck. I believe him but I tried hard just the same. 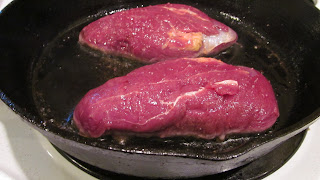 This is why I put all that effort into it. Duck breast is like steak. But without all that irksome mooing and waiting around for a year or more while it grows out. It only takes a summer to grow out a duck to get breasts like this. And it's like the best filet you've ever had. Only better.

The best thing about having foodie friends is that they don't think you are out of your mind if you send them an urgent email telling them that right there in your kitchen you are having caramelized pears with smoked duck, figs, and extremely stanky, moldy goat cheese for an appetizer...and a seared, rare duck breast with a soy-honey glaze, plated up with crisp fried sweet and regular potatoes, and greens. You know who you are, and I appreciate that I have an outlet for my culinary celebrations.

When I lived in the city I'd have a similar meal at a nice restaurant....for about $50. My home grown meal was my time and about $2 in materials.

This bring us to how to smoke a duck. After I took off the breasts for the above meal, I had the rest of the duck and another smallish one to deal with. I just fired up the charcoal grill by making a stack of briquets on one side, and put the ducks, well salt and peppered with a drip pan under them (I just used a cast iron fry pan), on the rack on the other side. Then I tossed a handful of soaked hickory chips (from the store by the bags of charcoal) on the hot coals. And I just kept doing that until the ducks were done, adding charcoal and chips from time to time. How did I know they were done? By looking at them. I know. Its not very scientific. Here's better instructions.

Using a smoker is my new favorite thing. Basically you can't monkey it up. The only thing to remember is to allow yourself plenty of time. 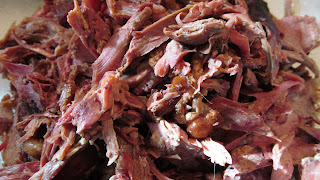 Once the ducks were cooled down I took as much meat off as I could then put the carcasses into a stock pot and let them simmer until I had lush, rich stock and the meat was falling off the bone. I canned up the stock and took off all the meat. I got a nice big bowl of meat for my efforts and will be using it for eggrolls and potstickers.

I also got some beautiful breast meat that I'll be using like smoked salmon - probably in a pasta dish kinda like this.

I know that it sounds too easy to be true, but really, smoking a duck is extremely easy. *Struggles to not make any more stupid jokes.*  I have an older model of this smoker, the Char-Broil Offset Smoker American Gourmet Deluxe Charcoal Grill

. The best thing about this model is that I can either have the smoking fire on one side of the barrel or use the "smoke box" on the side. I use this type of smoker for our bacons and such - and I'll be using it for the ham that is curing right now.

Happy Tuesday everyone!
Posted by Ohiofarmgirl at 7:19 AM

OK, first let me say...you got through that post with grace...see, I could NOT have done that! LOL Way to go on the duck smoking! *cough,cough* ( i hear its bad for the lungs) It looks DELISH! OK, do tell me....I hear the "high from smoking duck" isn't that good, since they are mostly flightless birds. See? I told you, I just couldn't do it!

Really lovely! And if you get that again I strongly recommend you do Ruhlmans duck proscuitto. AB Fab!

Which breed of duck do you have?

I LOVED our ducks! Well, the way they tasted anyhow. We smoked most of them whole, but I'd like to try your recipe for the breasts. We haven't raised them in four years now because they were SOOOOOOOOO very, very messy. I had to clean out their water like Every. Thirteen. Seconds.
Which breeds did you have that are good breeders? We didn't keep any of the Pekin ducks we had, they all ended up smoked.

Hey we could do that,it's a little different than our smoked turkey but it would be good mmm!We use a Brinkman for all of our smoking and we have had a few of them.Nice.

Chad was reading an article on raising ducks. It said they'll usually hatch 15 or so and if they're lucky, one or two will make it. He said, "Ours hatch 15 and 18 survive." I have that grill only a little smaller and I don't have the smoker attachment. It's probably the best birthday present I ever got. I think I've had it close to 10 years.

I think I'll try this and practice it until I get it perfect. Lord knows I won't run out of ducks...

One of our friends had a duck that was setting a nest. He asked us if it was hard to raise ducks. Chad's reply, "no, just make sure you have a male and a female." Soooo, if you can't find a duck, just stop by Tilton Hollow and we'll load you up. You may even get a nasty goose or 5...

I've had roasted store bought frozen duck before, delish! I did the same with goose once, delish and really rich, oil wise!

thanks Dave! And yep I keep wanting to try that - so easy to do. We need more ducks. ;-)

Hi Karen! These are a mix - we have some of the meat types and some runners. And some of the runners were mixes so its a mishmash out there.

Carolyn, I just love them too. Any blue eyed, all white duck hens get a pass. I have a small gaggle of them - I just think they are adorable.

AnnNF - you would totally do a turkey and it would be spectacular!

JJJ, I laughed so hard when I read this. One time our Miss Duck hatched out 17 babies and they all lived. Then we snuck about 5 more under her. She is a great momma. And they breed like rats - holy cow! We tell people to take eggs out from under your momma duck once she sets or you'll be over run!

Nancy, its too bad that duck and goose isnt more popular - its just delicious.