It's meat! It's pie! It's meat pie! All my favorite things all in one place! Are you kidding? 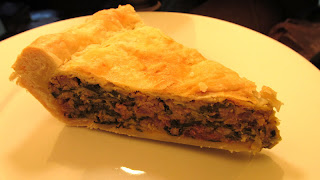 My pal, Ken, over at Living the Life in Saint-Aignan posted a glorious Savory Swiss Chard Pie the other day. When I saw it I just new I had to try it. And how easy peasy!

I had to make a few adjustments because I didn't have any already cooked chicken or ham. So I decided to tweak the recipe and use ground pork. I browned about a pound of ground pork, added onions, swiss chard, and the all important pinch of nutmeg. I don't know why but that nutmeg really gives this savory pie some oomph.

I turned the browned meat and chard mixture into a bowl to cool slightly while I found the cheese and eggs. I didn't think it needed any olive oil because the ground pork had plenty of fat in it so I just used a glug of cream instead. Then I just mixed in the eggs and cheese, salt and pepper to taste and the filling was done. I did not use any rice.

The best thing I did was follow Ken's instruction to use an egg wash on the top crust. I usually don't do this but it made the lard crust even more extraordinary. I chose to use an all lard vs half lard/half butter on the crust because I knew the savory filling could handle the taste. And the crust turned out incredibly flaky. Add the extra crispness from the egg wash and this crust was spectacular.

I think meat pie is my new favorite thing. And yes. It's a breakfast food.

Fantastic, Farm Girl. Glad you got inspired. I wish I could taste the crust made with lard and the filling made with ground pork. You've given me some new ideas,

Your pal in France,

Thanks Ken! This was a great recipe and it was absolutely delish!

What a beautiful pie! My dad used to make pie crusts with lard that he kept hidden away so that my mom wouldn't know he used it. He lived to be 98, so I guess it was healthy enough.

I've got left over french roasted chicken and fresh collard grens. I know what's for dinner tonight! Thanks. Hmmm, would be good with turkey too :)

Mine came out really nice last night! Thanks! Photos on my blog soon...

Thank Evelyn! Actually naturally rendered lard (not the store kind) is good for you! And it makes the best darn crusts and pastries.

Nancy did you publish our meat pie yet? I'm gonna go check....

Thanks Dave, it was a keeper for sure.