One of the great biblical truths  of all time is "Ask and it will be given to you..." Some people think this means it's like a big wishing well and then stand around in their disappointment when it doesn't work out. 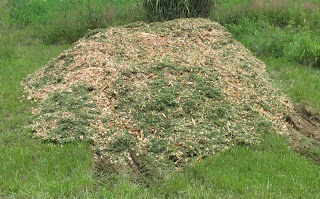 A single helping was such a blessing....

But those of us in the know understand that the key is to ask for the right thing. You know you're doing it right when you get what you want and you want what you get.

Yesterday the dogs and I were in the upper garden standing in the weeds and really wishing that we had a huge truckload of mulch. Mostly I've been keeping up with the weeds but there are some spots - lots of them - that need a heavy mulch cover. As I was standing there asking for the Hand of Provision to be upon me... I heard it.

I went running out there.

I closed the gate behind me and ran up on the work crew, smiling and waving. "Say, boys, go ahead and park in the drive if you need to - this is a dangerous hill." I said.

One of them walked up to me but he was really looking at Dog#1 and Dog#2 behind me at the gate. The dogs were putting on a fine performance of The Mouth and Teeth Show.

"No, no, we'll be done in a minute." He said, still looking over my shoulder. "What kind of dogs are they? They look pretty serious - do they bite?"  Dog#1 was officially losing his mind because his momma was out past the gate talking to some strange man.

"They don't bite me, friend." I said and we both laughed.  "Anyway," I went on, "Let me know if you need anything and if you want you can go ahead and dump all those wood chips right here." I said pointing.

He said that they don't really do that and so I waved and walked off. The dogs were happy I was back on the right side of the gate and we all went about our business. 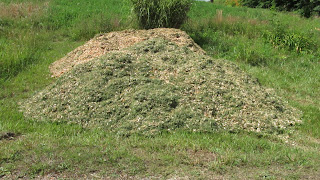 ...but a double portion was more than enough.

A couple hours later I heard a big truck and the distinctive big truck beeping noise. So I went running out there. The highway guys brought the Big Dump Truck and it was full of wood chips.

"The boss said I could bring you some. Where do you want this?" One of them hollered at me. I was agog.

I pointed, they got the truck turned around, no I didn't care about the grass... They dumped a huge pile of fresh wood chips. I smiled and clapped.

When they saw how happy I was one of them said, "You know, I could bring you another load if you can use them." I nearly passed out with glee. As promised they came back in a couple hours and I got a double helping.

To be sure this is fresh, mostly pine wood chips and needles. So I won't be mixing this into my soil  - it really needs to compost down a bit to work it's magic. There is a huge difference between adding soil amendments by mixing IN vs putting amendments ON the soil. I work compost INTO the soil  that is well composted... I put compost ON the soil that hasn't composted down yet. How do I know when its done composting and is ready to be worked into the soil? When it's nice and black and crumbly. So until then these chips and needles are just the ticket for my garden pathways and troublesome weedy spots.

I've been working double duty on a particularly difficult, hard pan, cement hard clay section of the garden that is riddled with horrible weeds. You can't till those weeds out because they seem to multiply when they get chopped up. So I'll just dump a couple inches of this fresh pine mulch on them to show them who's boss. By next year I'll have a lovely weed free area with lots of composted mulch from these weed chips. There is a great article about it here on the Mother Earth News website.

While I might be a little hesitant about getting mulch from cities and municipalities... I knew these highway guys were working right on my road and that the wood chips were from trees they were cutting down that day. I didn't need to worry that they were chemically treated old Christmas trees or leaves that had been laying on the street soaking up oil or what not. So I was thrilled to get this double huge pile of chips.

Now all I have to do is trolley out there with my favorite wheelbarrow and spread these chips around at my leisure. I'm exponentially increasing the value of these chips by cleaning out the hen house at the same time. So I'll put down a layer of barnyard litter then cover with chips. By the time next spring rolls around I'll have spectacular, friable soil just waiting for me.

The great thing about this whole arrangement is that the highway guys didn't have to drive the chips all the way out to the local composting/recycling center... my house was on their way home and near their job site. They saved the fuel, I got the chips delivered, and it was about a $300 value for me!

So you know what I'll be doing all day. I'll be singing songs of praise as I'm tromping up and down the drive with the wheelbarrow overflowing with free wood chip blessings.

Happy Tuesday everyone! Are you asking and receiving?

Posted by Ohiofarmgirl at 7:24 AM

Many tree services dump their chips at a composting site down the road from us. Because they come by almost every day with loads, and the line to dump is often long, they are more than happy to dump here instead. I've had a nice big chip pile, refilled several times since April, for all the garden paths and composting I can stand. It's awesome!

Oh how WONDERFUL! Sometimes, ya just have to ask. Like the dirt we "asked" for. I think they went a little overboard when they brought the 20th load of 10 tons of dirt...but..we will get it spread...eventually. LOL One wheel barrow full at a time. Congrats on those wood chips.

You also asked for pictures of corn...

We asked the Universe for either goats or a cow. The Universe responded. We got both, all within one weekend!

Years ago, when living in the UK, I asked for a place in which I could work. My request was answered, and years later, when the time was right, our ruin of a house in France came our way!

Can I just point out that the phrase "a lorry load of chips" means something completely different to us folks here in the UK! :)

nice one, we bought a mulcher and make our own wood chips, but its a slow and noisy process. It really does improve the soil :)

Rachel that's terrific! The guys showed up again and I'm kind of stalking them. I hope they leave more for me.

Ian, I said they don't bite ME! ha ha ha ha. The same guy was back today and I showed him Zander. Z makes an impression for sure. ;-)

Free is my favorite price, Tonya!

Budd, all my prayers were answered. That corn is awesome - great work!

Mark, I'd love a whole truck of french fries! Ha! ;-) Once when I was in Scotland we drove past some random hills and I asked my host if they were the "Highlands" - she laughed. And I could not figure out why there is so much pudding there - and I laughed. It's funny how we don't have the same words.
:-D

We have an ancient chipper, Liz, but it is slow and stinky. This was such a blessing!