Friday Wrap Up and Potato Digging

I have to say that 75* at 4:30 in the morning seems just a little inhuman - but that's how we started our day. This heat dome is about to burst but we have one more day in the Fire Swamp before we will get some relief. 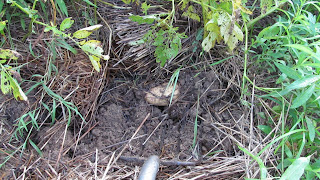 Yesterday I dug some potatoes. It's totally the funnest thing ever.

I nearly cried when the weather guy said that the cold front is now coming thru Saturday afternoon instead of tonite. It can't get here soon enough. Again, my only goal for today is to keep everyone alive.  I have to bring in all the hay that I cut this week. There's not very much but I'm going to try and get it in early. 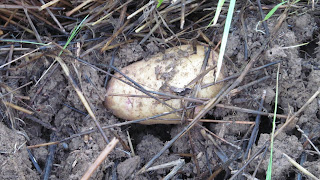 Look at this big one!

Everyone in the barnyard is doing the best they can. My big worry is the meat chickens - they are having a tough time. One of my pals asked if there is anything I can do for them and, ironically, the answer is to butcher them before they die. But I'll see if I can get them thru one more day - we won't have time to send them to their glory until early next week. The lone rooster volunteered to be first. I can't wait. 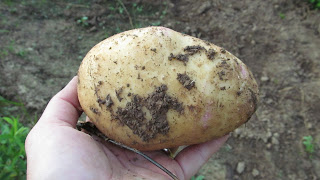 It's huge! A Yukon Gold of the most magnificent order.

I have fans going for everyone, "cooling spots" set up with buckets of ice cold water and where I have sprayed the grass with the hose, and I'm hosing down the turkey house to cool it as best I can. The sun is about to come up and I'm going to get everyone out early. 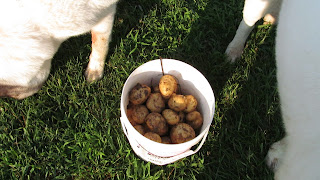 I got this bucketful from about 6 feet from one row. Dogs for scale. Kai helped.

Kai and Zander have been outside - pretty much the only outside time they'll get today - since 4:30am. They are currently barking their heads off. Do I feel bad about waking the neighbors? You mean the ones who thought huge booming fireworks last nite would be hilarious? Nope. Not at all. I know that guy doesn't work today so the noisy parade of geese should be just the right reminder that decent folks get up early around here. Jerks. 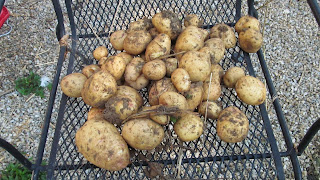 The easiest way to wash off taters? Using this iron mesh chair instead of a colander. So easy to wash the mud off into the gravel. Just don't have the pressure of the hose up too much - these tender skins will also come off!

Thing have really been hopping around here - just haven't had a lot of time for chit chat. The big story is that I've started another round of planting. Tons of beans for canning. The ones I planted earlier will be the stars of our summer dinners while this "late" round will be for canning. Isn't it too late? Says who!? These Blue Lake bush beans will be done in 50 days - that's just early September so I have plenty of time. I'm planting more beets too. 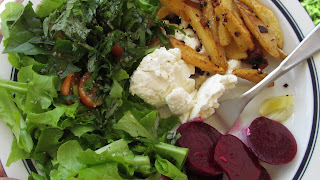 Some of those taters ended up in a starring role of this lovely summer salad. Along with beets and goat cheese. If only I had some chicken livers - then it would be perfect. Good thing that rooster volunteered. Soon.

We also finally got the turkeys out of the house - thank heaven. My allergy problems left with them so I'm thrilled. They love their new set up in the garage - we have them on cement and in a predator-free place. Little turkeys are just hilarious - some of the toms have started to puff up and strut. The little practice-gobbling is the funniest noise in the barnyard. The barncats couldn't care less about them but Kai thinks they look delicious.

Looks like the sun has just about cleared the horizon - I have a couple hours before it clears the trees so I'm going to get moving and get that hay down the driveway. My plan is to pile it on tarps and pull it down the driveway - like we did last time. But I need to make sure it's good and dry before I stack it up. I'm hoping the rain will get here early so I'm not taking any chances with this "green gold." Altho I've noticed that hay prices are dramatically lower than last year. Not to be a hater but ... harumph.

Keep cool everyone! Any body else having a heat index of over 103* today?

Posted by Ohiofarmgirl at 6:18 AM

Yep, our heat index will be between 100-107! Too hot for me! I think I'll be out there singing in the rain when it finally comes! Stay cool!

Your potatoes look beautiful! I would love to have a farm, but I live in the city. Maybe one day!

We are cruising around the mid 80's at the moment, and that is hot enough. But my oh my, those potatoes are a success! Most of ours were set back by the weeks of rain early on in the year, so they are not very big. Hope you have relief from your temperatures soon.

Ah summer, I honestly don't miss the heat, I hope you get some relief soon. Love the potato washing chair!

Finally broke up here.... But still warm just not ridiculous.

Next two days in the yard!

Good looking taters! 103 here yesterday, but it's dry heat. We give our hens lots of crushed ice, or cool treas- grapes (crushed), cukes, etc. We bought a cheap mister at Home Depot for $8.00. Attach to a hose and run near the chicken area, not much water use and keeps em cool!

Good iead here too, if you have a small flock-
http://www.muranochickenfarm.com/2013/07/bobbing-for-berries.html

Did you finally get a cool down, Robin?

Hi 4tlog! great to see you!

Vera, is the heat wave getting you? or is that just in the UK?

Dave did you get this good weather too?