It snowed all stinkin' day yesterday. The. Whole. Day. At this point I'm sure that I have snow rabies. I'm slowly being driven out of my mind by snow. 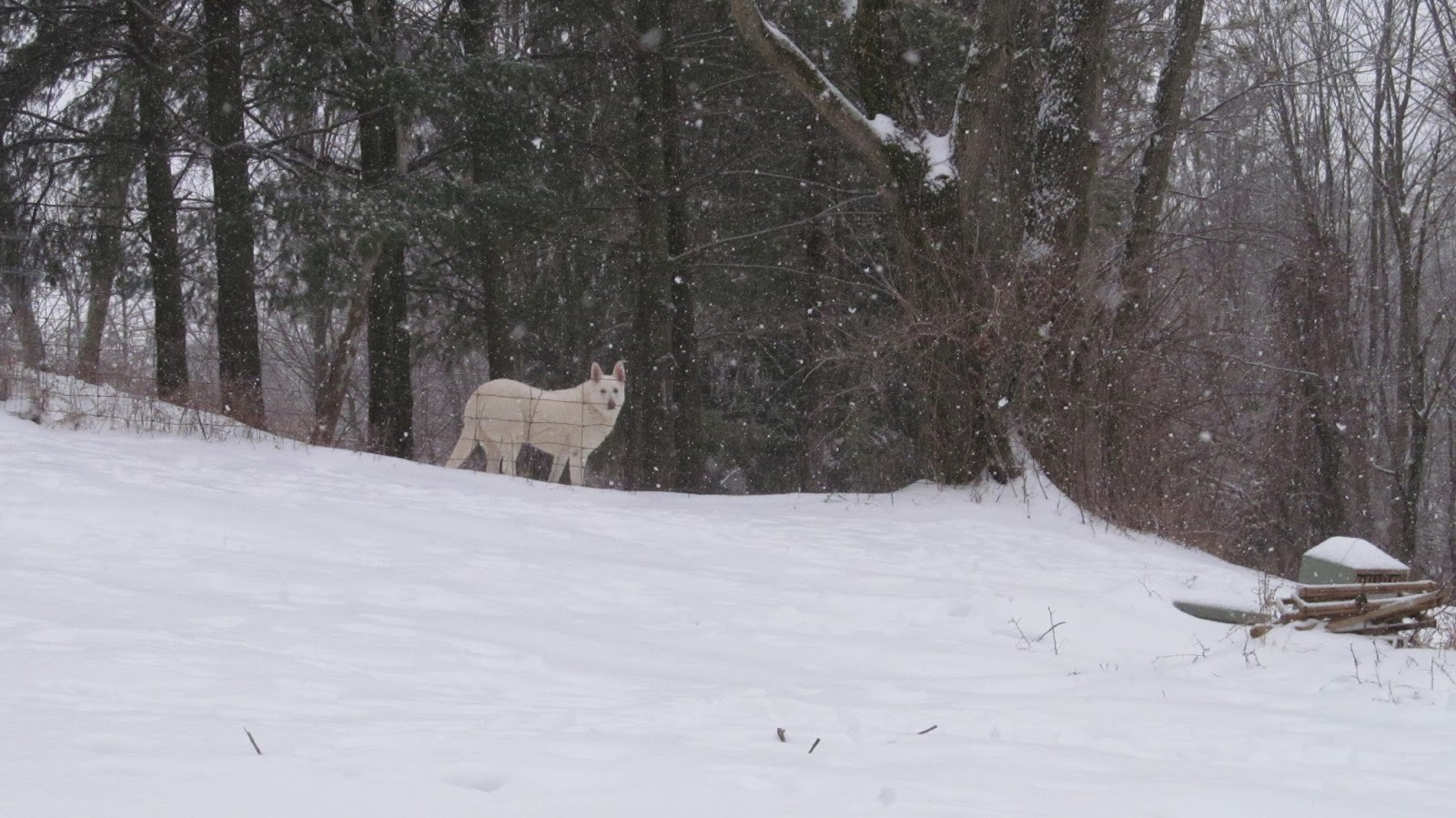 My White Wolf, does not have snow rabies.

Having snow on the ground for this long is extremely unsusual. Normally it will snow then melt after a couple days. We won't get near melting until the end of the week - just in time for more snow.

At this point the chickens have all developed a thousand yard stare, Nibbles is curled in a corner singing nonsensical songs and muttering that she wants to go and live with Aunt Sally, and I'm stalking around the house like a caged tiger. 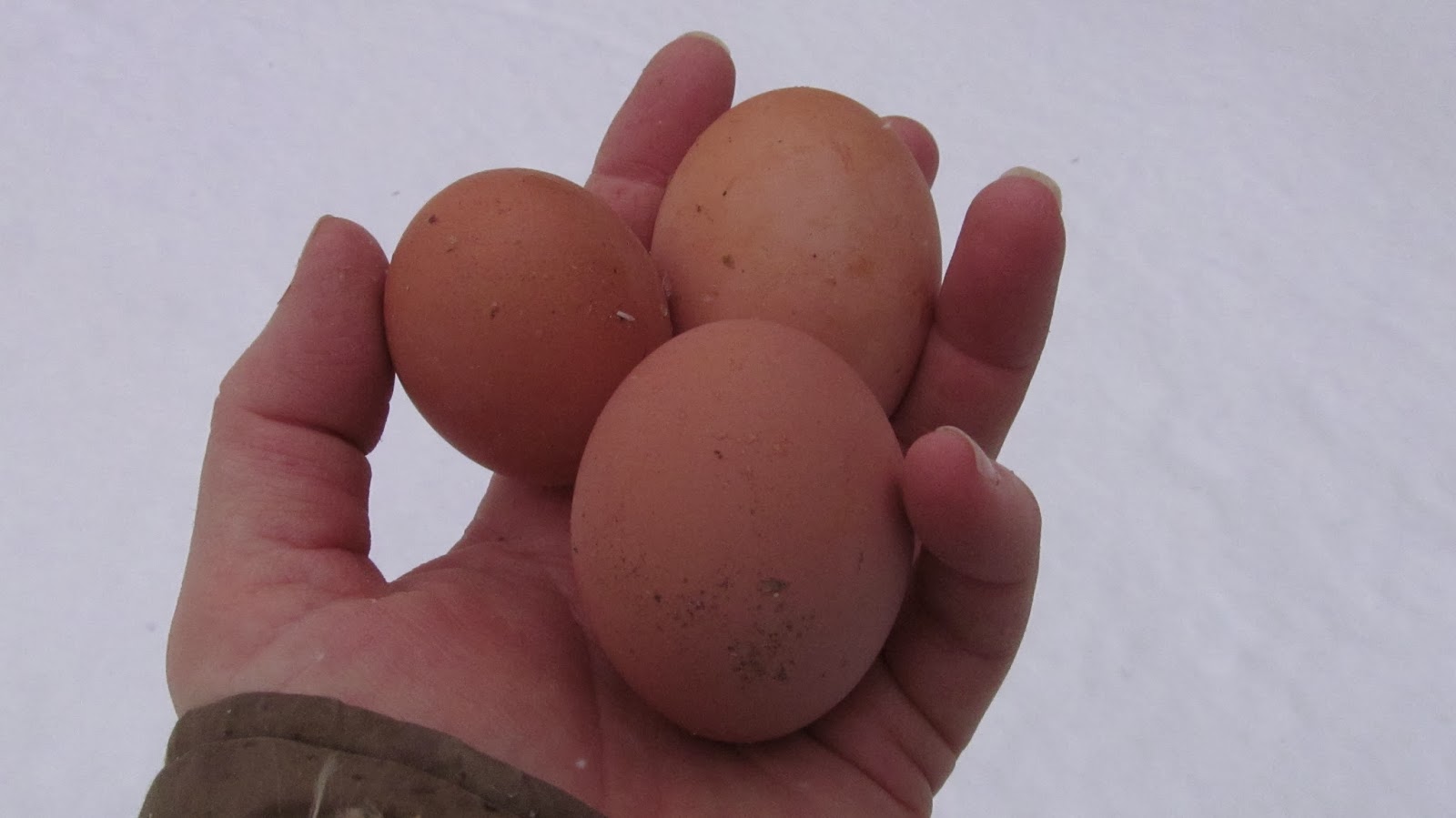 Adorable little egg. We have a new layer!

The only upside at this point in the Long Winter of Doom is that we don't get in from chores until a little after 6pm. The extra day light is really helping.  The chickens are reliably producing eggs - a couple at a time. Looks like we got a new layer too. 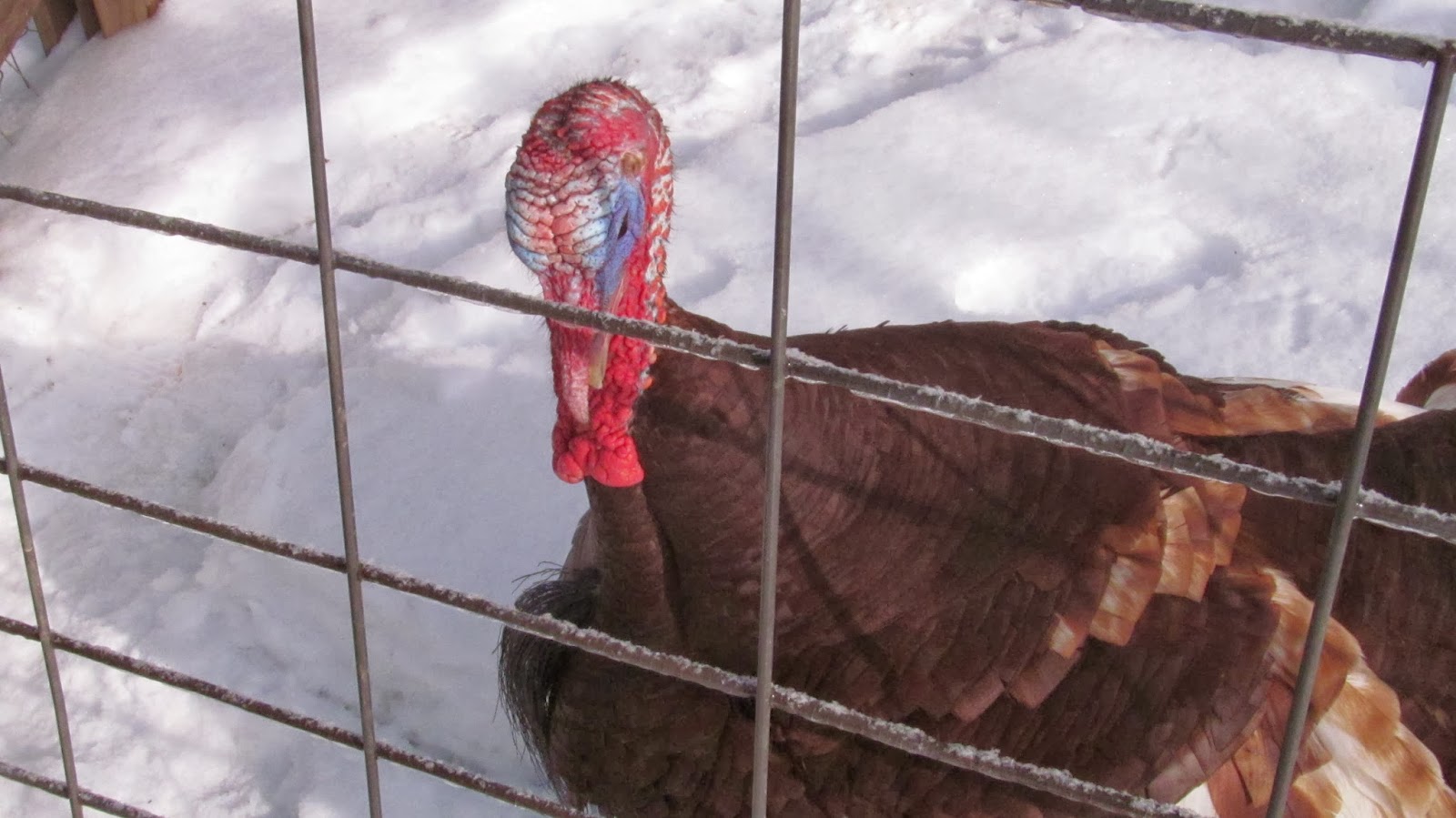 TZ wants to become turkey and noodles. Keep it up, pal.

The extra daylight has also caused the male-folks in the barnyard to get a little nutty. About this time of year the roosters start fighting - we really need to have a butcher day. Our tom turkey, TurkZilla, may die at my hands if he actually flogs me - which he has been threatening to do... and that guy, Tommy Boy, had better watch his P's and Q's. That Demon Gander, OD, tries to kill me every time I bring them a new water bucket. He even took a run at Zander.... it's a good thing I can move fast - even in big clompy boots and snow pants. No geese died of The Black Death. Almost everyone is getting a little surly. 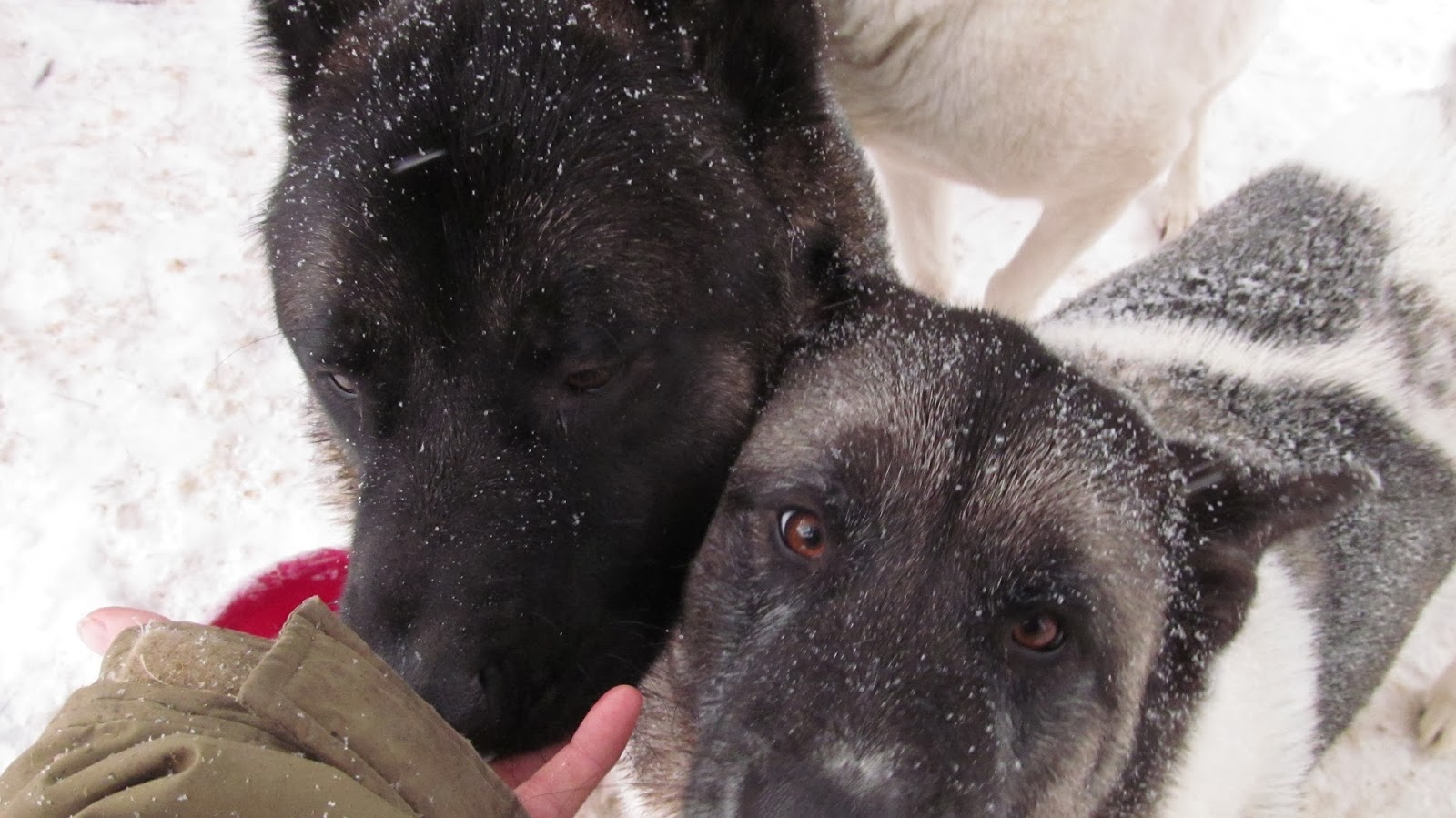 My snow faces. Zero hoots for the snow. Wish it could snow all year 'round.

Of course the dogs can't get enough of the snow and all the activity. We had two deer come sniffing around down by the pond. The dogs ran them off and thought it was the best show in town.

The dogs have been hunting all kinds of things. We've been looking for bunnies down in the woods, varmints in the goat house, and everything that tunnels in the ground. Kai can hear everything that happens under the snow  - she brought me a rat that she fished out of a snow drift. Eewwwee.. I mean, good girl Kai!

Today means more cold but no more snow, but definitely more snow rage. I'm hoping the get the goats outside today for a good run around. The extra snow will provide better footing for the ice crust that is now buried.... hopefully Nibbles and her belly full of babies will be able to get around for a bit. Looks like tomorrow.... with the -5* morning temps..... everyone will be stuck inside again.

Happy Monday everyone - how is your snow rage? Anybody else got snow rabies?

Posted by Ohiofarmgirl at 6:39 AM

Hmmm, "Snow rabies" I was thinking more like "snow crazies" We really need this stuff to melt! My poor body doesn't remember what it is like to walk.. "normal"

I sure am tired by the nonsense. Sitting here watching the morning weather only wind chills of -25 to - 35 today. CHeers!

No snow rage here, just sinking into muddy wetness, which means that our animals have to stay inside, which is making them stir crazy. At least it is mild though, for that we must be thankful. Our rottweiller girls refuse to go outside, and have to be bribed to do so... so opposite to your snow dogs!

Hey there. Something that has worked for me in the past with aggressive turkeys and geese-- get ahold of them and hold them on their back for a bit. When they get up and walk off they will usually avoid you for a few days--- if you say the same thing to them each time they do learn. Some learn pretty fast. Right now, I notice that two toms are better than one. They pick at each other instead of me.
Laying them on their back might work on roosters as well, but I usually just put them out of my misery.

Here in the Big White North we just think that April is getting closer all the time, won't be long now. Spring is just around the corner.

In honor of the Olympics, our driveway with a hill as you approach from the road, has turned into "The Bobsled Run". It is a solid sheet of ice.
We have had an appointment to take our steer to the butcher on Thursday. He really needs to GO. Don't know what we are doing because of the driveway. Hoping for some melt tomorrow.

No snow rabies here, just sun burn and huge electricity bills from the air con being on for weeks. Ave temp is 35-42 degrees celcius this time of year and its been our hottest Jan for yonks. I think i could handle a little snow now and then.

Cheers from Down Under

Its colder this morning, Dave.. I have totally had enough.

I laughed, Vera, hee hee hee. But i know someone else with a rottie and he doesnt like to go outside either. My dogs refuse to come in. ha!

Thanks, Anon, and I got your note. I hope this works.. that turkey is out of his mind!

Thanks, Horst, and always so great to see you. Come on, Spring!

I hope so too, Ann! Careful on that drive..but depending on how it goes you could be doing your own butchering at the bottom of your drive. Zoikes!

Hey Lynda! Thanks for coming by. I'm always just so amazed at how conditions are different at your end of the globe. We'll send you some snow if you can send us some heat? Cheers! :-)

I like the term snow rabies because that's about how I feel for sure. We've had bitter cold and snow pretty much since Nov which is highly abnormal for Toronto. The worst part about the cold is not the cold itself, it's having to dress in millions of layers to go any where! AT least in January I was busy with work but Feb has been slow and normally I love that I work from home for the most part but right about ow I'd be grateful for an office job to go to just to have a reason to leave the house!