Guess what we did over the weekend! 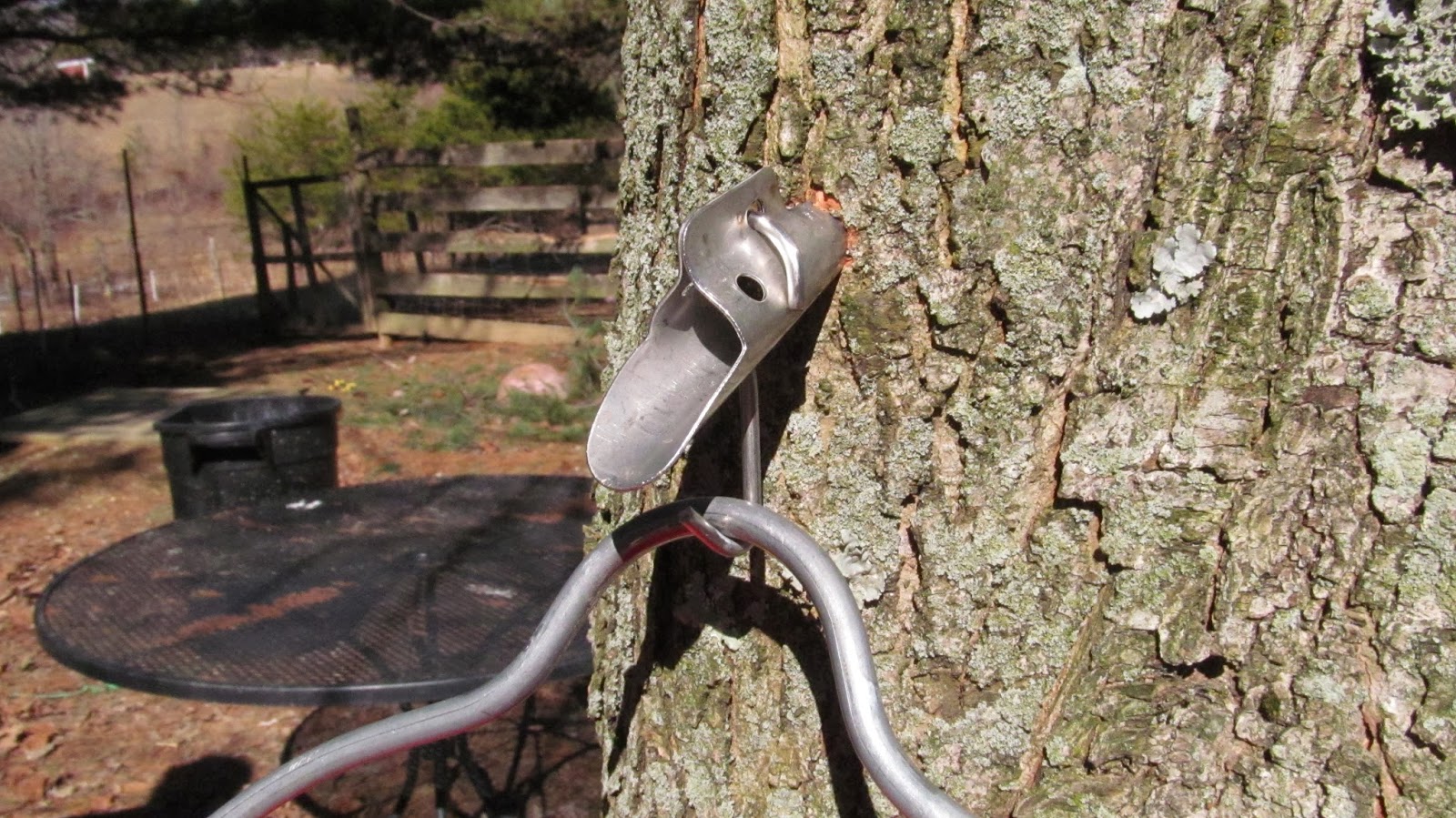 Tap set up with bucket. That little hook holds a flat sided bucket against the tree.

We were thrilled that The Winter That Won't End finally loosened it's grip. We had such a stunning weekend - it was just like heaven. Of course it won't last as the Polar Vortex is coming back this week but that one day was really just what we needed to make it thru this last winter blast.


Sap running from a newly tapped tree. Dog for scale.

And we tapped our trees.

According to my notes, last year this time I was already "cooking the M" and waiting for the DEA to bust thru my gate and take me down on a meth charge. It didn't happen and it looks like we are about two weeks behind. Saturday we got a couple gallons of sap but not much to write home about.

At first I was really nervous that we missed the whole thing. Last weekend we passed a guy working his trees - he had tons of sap! But then I found out that the Dawes Arboretum is having their Maple Syrup Madness days the first week of March. The best thing about this event is that it's FREE! What a fun thing for the family - or if you want to see if tapping trees is a project for you (it is!).

I figure that the tree experts are in the know and if they are tapping in March then we probably didn't miss all the sap running. I want to thank my pals at Terravita Farms for reporting the Dawes Arboretum Maple Syrup Madness event in the superduper Broadway + Tresher online and print magazine.

As for us, we are trying a new thing this year - using bags to collect the sap instead of buckets. Granted that our buckets really did the job - it was kind of a hassle to run out and take them up if it started raining or snowing. And we had a few bugs. Who knows what those squirrels or "whatever" were doing. 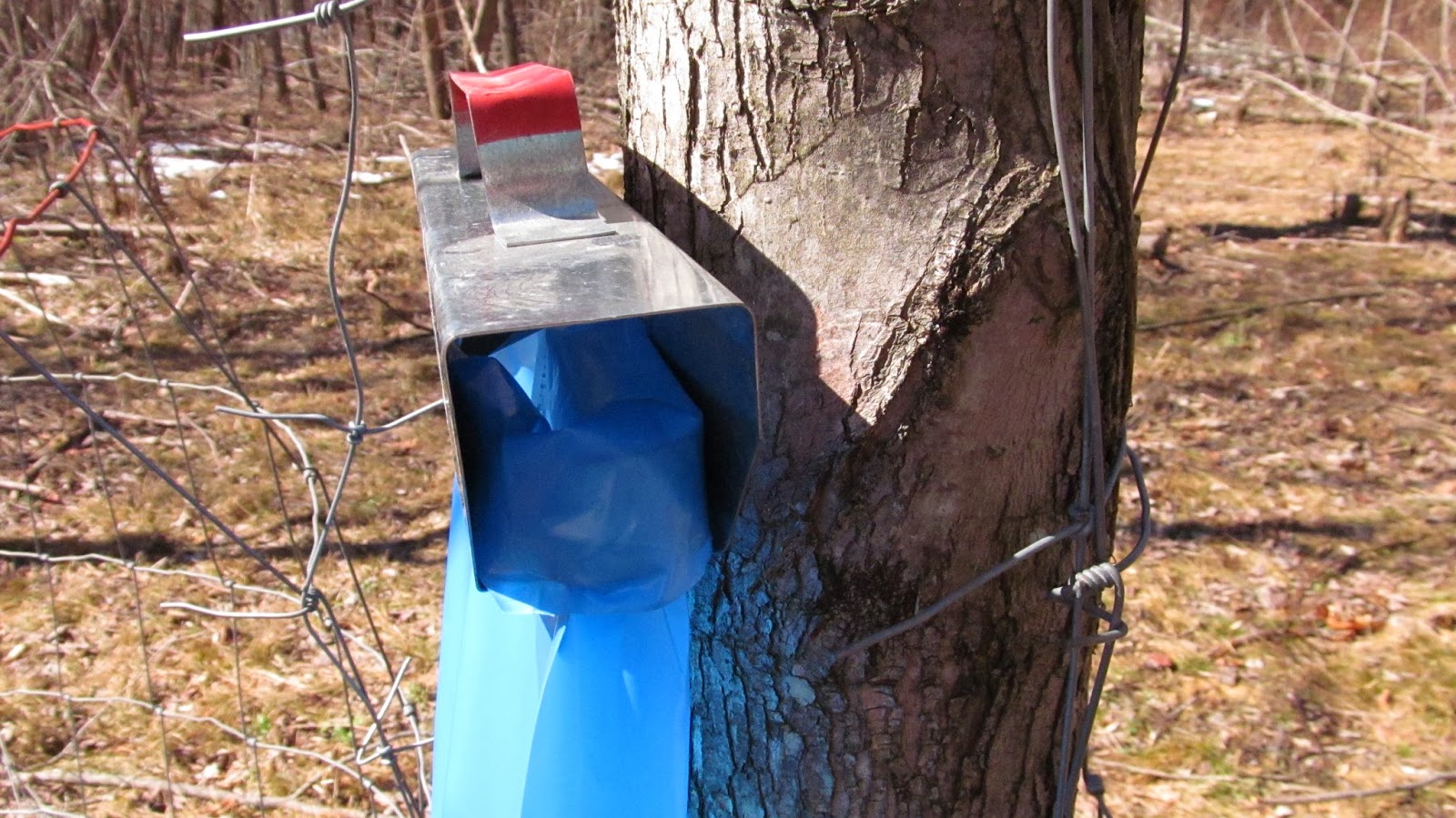 Side view of the bag set up. See the metal handle holds the bag in place and is secured to the tree by hanging it on the tap.

The big blue plastic bags are held onto the tree/tap with this kind of metal handle contraption. We just slipped them over the taps. Since that guy down the road from us set up about a dozen of these sap bags we are thinking that they are going to work out for us.

The tapping process is really easy. Find our marked-during-the-fall maple trees, grab the drill and appropriate sized bit, drill at an upward-ish angle, and tap tap tap that tap right in. Easy peasy. Set up your bucket or bag and watch the sap come flinging out of the tree. 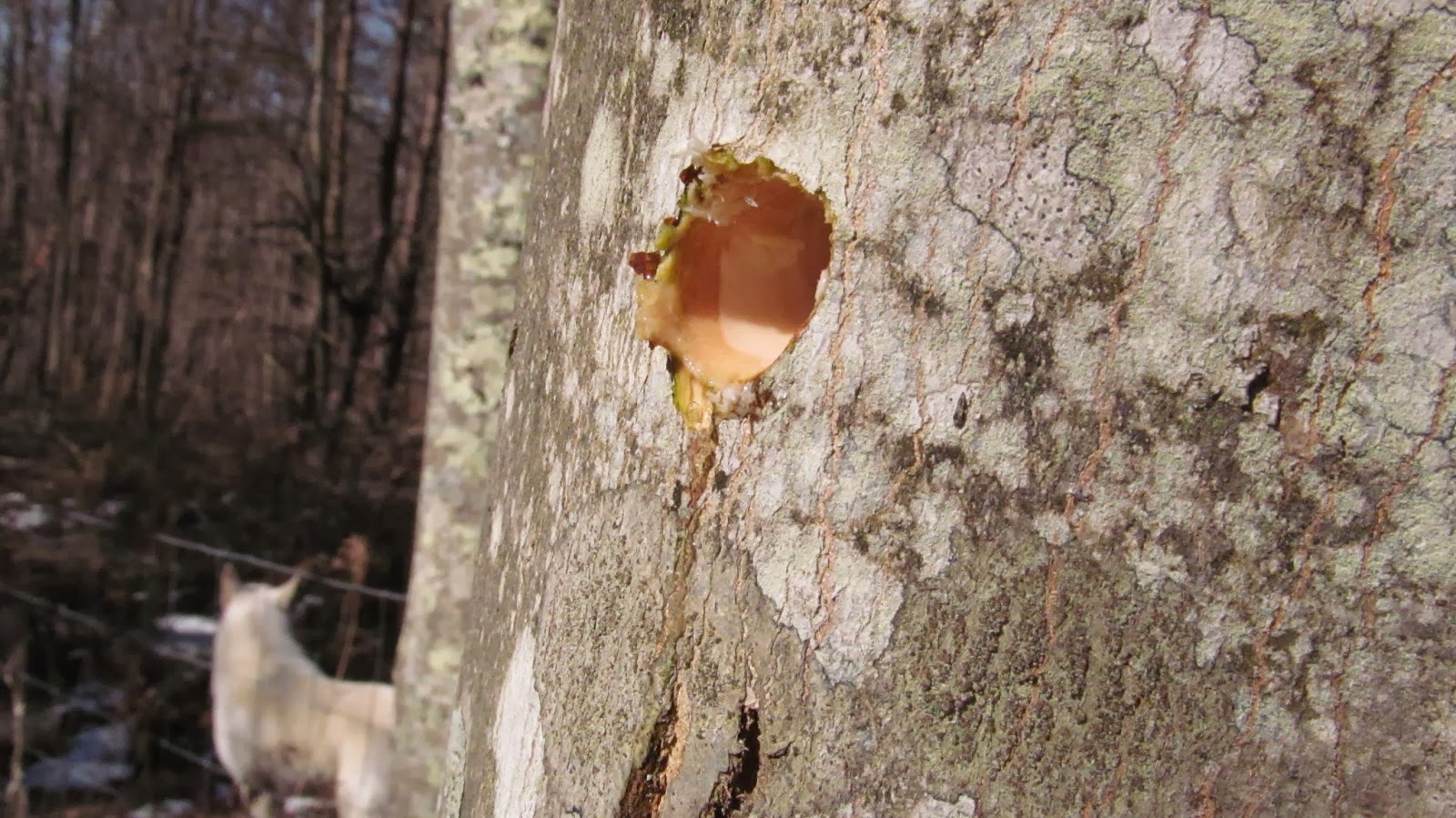 The sap immediately started running after the hole was drilled. Dog in background.

What if it doesnt come flingin' right out of the tree? Um. I dunno. I'm guessing that the sap isn't moving - wrong time of day, not warm/cold enough, etc. Last year we had a couple of trees that didn't work at all... and then we had some real winners.

This year we had sap flinging out of 3 of the 6 trees we tapped.....And nothing yesterday from any of them - probably because it didn't freeze the nite before. Now we'll have nothing but below freezing temperatures so we might have to wait until this weather warms up to get anything. But we have a lot to learn about doing this so I don't know what makes a good vs a bad tree for tapping.

I'm still holding out hope that the Dawes Arboretum knows more than me and that their March Tapping Madness is the "right" schedule.

Happy Monday everyone! Are you tapping?

wow, it really does flow!

Well that was interesting. We dont have maple trees down here in Oz. If we want proper maple syrup then I buy Canadian probably because that's what's sold. It does look interesting. Id be eating a whole lot more pancakes if i could grab it was a tree outside.