The End of The King. TurkZilla is dead.

Friends, yesterday marked the end of an era. TurkZilla, our top turkey.... is dead. 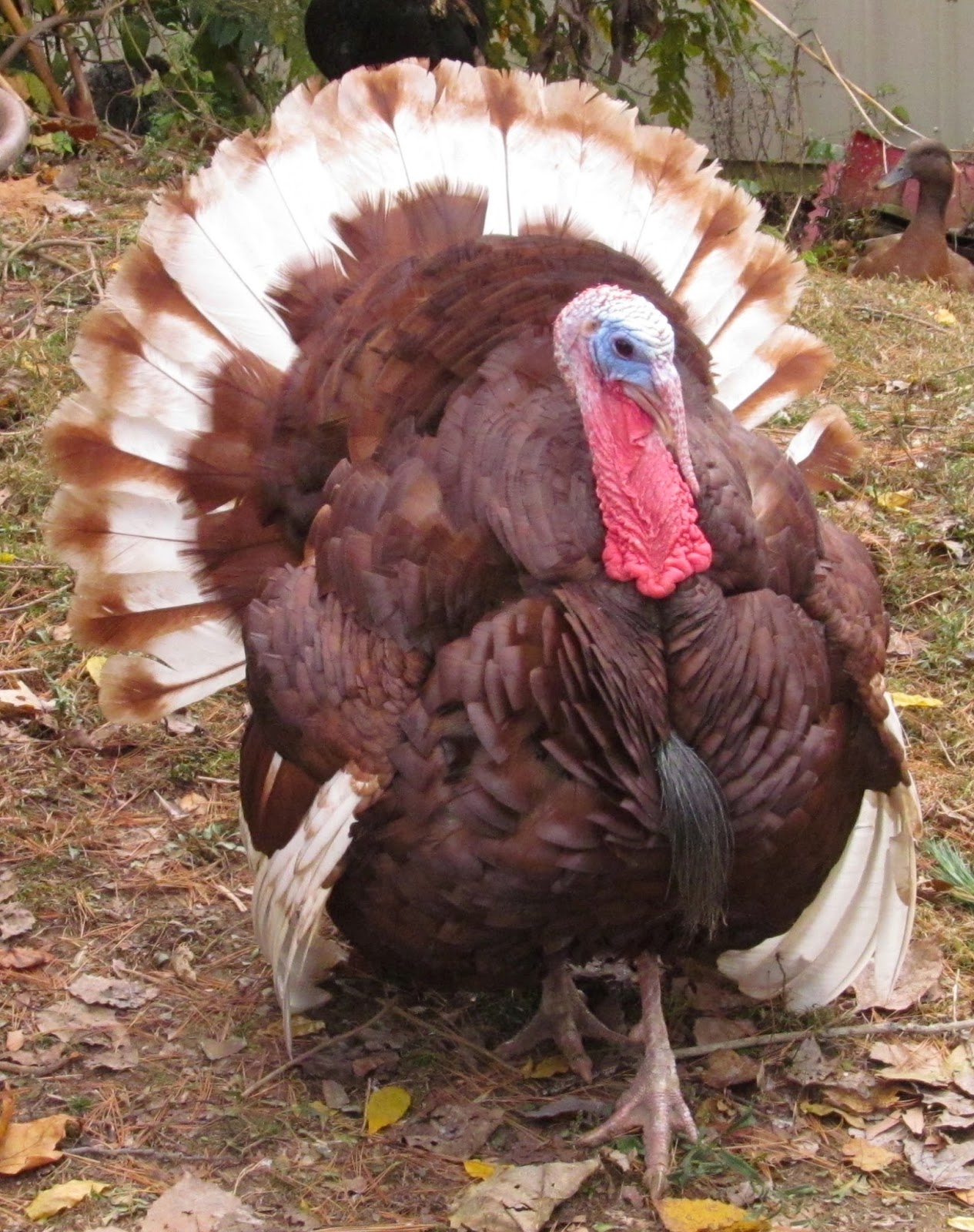 The light in his hateful eye has faded. I will never again gaze upon his regal bearing. Hear his terrible, trumpeting gobble. No more shall mine eye behold his wrathful charge. Gone are the days that I warn visitors, "I can call the dogs back but you are on our own with that turkey." Or yell, "Dog! Get over here and get this stupid turkey off me!"

I went out yesterday to the hen house to a quiet calm. I saw TZ on the floor, his feathers akimbo.

"Hey, little buddy....whatcha doing?" I asked hopefully but alas there was no reply.

Nervously I poked him with my boot, ready for him rise like a phoenix, fly into a blind rage, and kill me where I stood.... nothing.

He wasn't faking it.

The chickens looked at me for guidance. I shrugged.

Then it hit me. TZ is...I mean... was.... my husband's favorite piece of poultry. At one point I wanted to put TZ in a sack and haul his ornery carcass up to the auction where I could fetch a good price but I was denied - and warned - that, and I quote here, "Nothing had better happen to that turkey when I'm gone at work all day!"

There I stood with the dead turkey. My husband would never believe me that TZ just flopped over dead. I considered staging a crime scene as there was no apparent sign of struggle or illness. But I would be found out. I decided to take my chances. I determined to distract my husband with schnitzel when he got home... and then ease him into the news. It had to work.

But first I had to get a huge dead turkey out of my damn hen house.

Kai carried his head, I took the trotters, and Dog#1 and #2 each took a wing. Zander was in time out for naughtiness or I would have just hooked the huge burden up to Zander's working dog harness and had him haul it out of there.

Reverently we carried the fallen king to the empty Duck Garage. It went mostly as planned.

We left TZ there in a rigor-frozen heap.  Then I went inside to tighten up my story. Everyone knew I hated that stupid turkey. There is no way I wouldn't be blamed.

Later, finally, The Big Man came home. He roared down the driveway and opened the door to his truck.

"Honey!" I yelled from the porch, "The turkey is dead and it's not my fault!"  I probably shouldn't have said that.

Shortly thereafter we made our way up to the Duck Garage. The dogs and I tried to look as innocent as possible. The Big Man opened the door and beheld the sight of the fallen king.

"It looks like he just laid down and died...... of a broken heart because of your hatred for him." Said my husband.

And then The Big Man sighed heavily and turned and lumbered off.

The dogs and I stood there and looked at each other. Kai started to say something but I cut her off, "No, Kai you may not eat that turkey now." She huffed and trotted off after her father. As I watched my husband stalk off towards schnitzel I thought, "At last....I'm free." I could go out in the yard now without risking death by turkey.

Thusly ended the days of TurkZilla. The biggest, meanest, orneriest terror of the barnyard. Farewell now, Good Prince, think no more of the trouble of this world, and go gobble in the halls of your ancestors.

A sad day here, Friends, there will be lamentation later this afternoon, the flag will be flown at half mast, and taps will be played at sundown. Each one of you should hug your turkeys close, you never know when you might go out and find them dead of a broken heart - which was totally not my fault.

Posted by Ohiofarmgirl at 9:35 AM

Oh this cheered me up (I have been writing for most of the day and am virtually brain dead from the effort!), and I cannot be sorry for such a demise. It was his time to go, and now peace will reign in your farmyard, like it does in our place now the goats are no longer with us in life.
But......a wee ( meaning 'small' if this word does not exist in the USA))thought.....will your man go buy another turkey to fill the gap that this one has left in his life? Just a thought!

He DID, Vera! I thought I was free..but dang. He wants to place another order. Oh no!

Sorry (to hubby of course) that Turkzilla has moved on, and happy for you that your days of 'attack of the killer turkey' are gone. Side note, this post is one of the best I've read on any blog lately...you have a great way with words. Color me jealous, ha.

well... Sorry for that I suppose.

THANKS, 1st Man! *gives hugs* but as Vera thought.. my hubs' thoughts have already turned to more turkeys. boo!