Anatomy of a dog fight

Actually, its not a dog fight at all.  Titan and Kai were just playing a couple days ago and I snapped these pix. 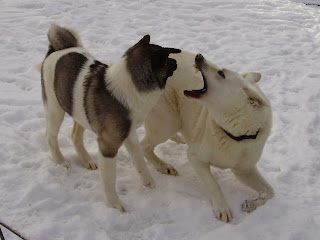 She loves to play, roughly, of course with the big dogs. Normally Lucky is in a big tumble with her but Ti gets into the fray also. 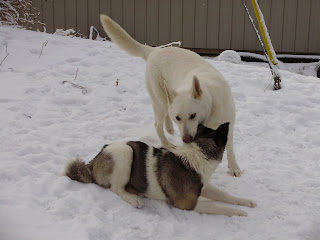 The great thing about these shots is that it shows how dogs use their bodies to rough house.  See how Ti uses his body to "intimidate" Kai, pushing her down into a submissive position? 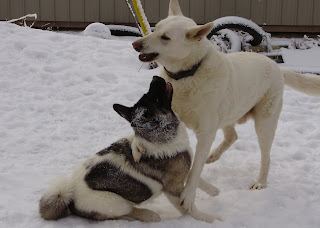 In all this play they are "telling" each other who is the top dog and who is lower in the pecking order. 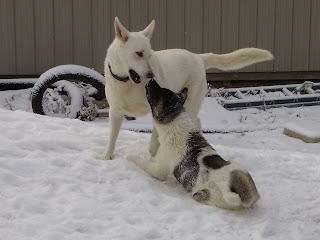 But in the tumble sometimes the big dogs let Kai be the big cheese. But only for a second... 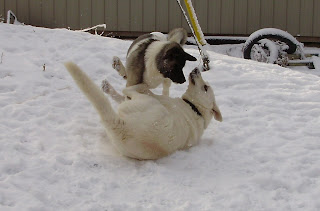 Our big dogs use their huge paws to box each other. Here you can see how Ti is using paws to give Kai the business. 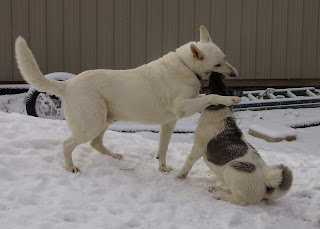 Even with all this rough and tumble, the big dogs don't ever hurt Kai. If she gets scared she yelps and they back off. But mostly she's the instigator. They are very patient with her constant bouncing around. When they have had enough they just get up and move away from her. She can be The Worlds Most Annoying Little Sister sometimes. But mostly she's just fun. 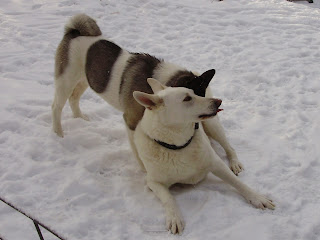 Watching the dogs play reminds me of how we use similar body language with our dogs. Even when we play we never let the dogs get the "upper hand."  The big dogs know they may never ever "mouth" or play bite on me. Kia is learning this too.

She is also learning that she may not box me or put her paws on me, especially if she is being pushy or wants something.  In fact, we don't teach our dogs to "shake hands" because its too close to this "boxing" which is a dominance behavior.  Good dogs keep their paws on the floor.

I also use my body when I'm working with the big dogs. Its not unusual for me to push and or "hip chuck" them if they are crowding me.  Or just goofing around. Normally, tho, we don't wrestle with the big dogs.

And it would be a very sad day for a dog who jumped up on me. We had to break Lucky of this bad habit. I think he did it twice after he came to live with us.

When we play with Kai on the floor I mimic how Titan plays with her. I don't let her "get the upper paw" and I also make sure that I stand, kneel, or just lean over her. Then I decide when we are done playing and take her back to the dog area in the kitchen. Its important that your hard workin' farm dogs know that you are top dog and these are ways that teach them who's boss.

Twice recently I heard from other people about how their dogs growl at them. Friend, I'm here to tell you that your dog should never, ever growl at you even if you think its play. You should be able to walk up and take anything from your dog (food, toys, chew bones) without incident and certainly without growling. Because we've always reinforced that we are the Boss Dog we've never had a problem. But if you dog is growling at you, run, don't walk, to get help from a dog trainer.

Its just one more lesson our little Kai is learning about how to be a good dog. Good thing she has a big brothers to teach her the ropes!

Happy Tuesday everyone! Now, who has a good dog?
Posted by Ohiofarmgirl at 6:31 AM

I wish I had myself a good working farm dog. But I don't believe in keeping a farm dog on a property that only has an acre. One day I'll have myself a redbone coon hound and a brilliant Austrailian Cattle dog to company me!

I loved seeing the pictures of your hard working farm dogs at play...kai is getting BIG.

We have three good dogs, because we know they are DOGS and not our children. I also body check my dogs and we can take ANYTHING away from them. I like to say "they eat because I say they can, and it's my food, I just allow them to eat it!"

I always want to get a video of Ginger and Ellie playing in the backyard cuz it reminds me of the fight scene in Ol Yeller......you know.......A WOLF, A WOLF....GET THE GUN TRAVIS! HA!!!!

Australian Cattle Dogs are awesome! Had 2 for 12 years... but they definitely need a job!

He isnt' much of a farm dog, but he tries hard - my sweet 107lb 2 1/2 year old Lab is always at my side. He lays near me in the garden, follows me through the chickens and waits patiently in the feed room for me to feed the horses (your little gelding, Buddy, chases him! LOL )

You'll loving having a hard workin' farm dog, Autumn! I can't get my work done with out them.

I know, Mr. H., she's getting huge! She's kinda in her terrible twos right now. Her favorite word is "No." Sometimes its very hard to be the puppy when your momma is bigger than you.

hi Lori! You know sometimes just keeping you company is a damn fine job for a good dog.

We don't have any dogs, just cats. Truthfully, I'm not really a dog person.

A lot of people do not realize the importance of training their pets. They are pets not children! They need to know who is the boss! An un-trained dog, especially a large one can be very dangerous!

You have two very beautiful dogs!!

You said it, Robin. Here this whole time I thought I was a cat person.. and now I've gone over to the other side. Who would have known!