Chai Chai has some questions yesterday about turkeys... so I thought I'd rattle off the answers here in a post while I'm waiting for some creepy meat to be fried up in a pan. Hows this for some fast talkin' about turkey? 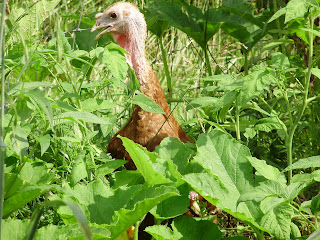 Bramble - one of our favorite turkey hens

Do they put themselves away at night like chickens?

Yep! Just like most poultry, they like to have one place to roost and they like a routine. You'll have to train them to go in at night but as long as you are consistent, go out at least an hour before sunset, and you have somewhere safe for them to go in...they will start moseying toward home. They will go in unassisted - for the most part.  But expect to put them away every night to do a beak count and make sure everyone made it. We herd ours in like we do with everyone else. You can just slowly walk behind them with your arms out wide and sing "Hey turkeyburkies! Go to bed!"

Or send your hard workin' farm dogs out there.

If you don't scoot them in at least an hour before sunset they may take matters into their own hands and roost where ever. Usually the most convenient place for predators to eat them. They panic in the dark so don't wait!


If not do they hang around like goats or sheep so the round-up isn't too difficult?

Its pretty easy peasy. We've had two very hard turkey round ups. All because we waited to long.

Everyone is different but we do not house turks with the other birds because....
* No ducks/geese because... waterfowl are really wet and can cause cocci to bloom in your soil and your turkeys will flop over dead.
* No chickens because... turkeys are highly susceptible to a disease called "blackhead." Chickens don't die from it but your turkeys will flop over dead. You can ask your local extension office if blackhead is in your area and if not you could probably have them together.  But no sense in taking chances.
* No chickens or other birds because... turkeys are big, heavy birds who can throw their weight around. Sometimes the turkey hens chase the chickens out of their yard. And sometimes the toms will chase the roos around.  Someone I know has an enormous tom turkey who killed his best roo in...ahem...er... a "display of dominance." Lets just say thats no way for a man to die. Either the roo died from suffering such an outrage or because the tom outweighed him by 15 pounds.

You also want to separate your turkey hens from the toms while the ladies are setting their nests . The tom will think the hen is just sitting around waiting for his amorous advances...and she won't get off her eggs... so he could harm or kill her.

If they are outside on their own I can't imagine how they would avoid being wiped out here.
We keep our fenced in with a low fence. Some people use 6' fence and that seems to work. The toms can't fly and the hens "hop"  more than take off flying.  The young jakes (immature males) will fly - like eagles given the chance. But that is for a really limited time. Just trim their wings on one side like chickens. Once they start strutting and getting their weight on they can't get enough lift to fly.

Our big problem is that the hens want to set nests in the brambles or directly next to the fox den. Just ask Bramble.

* For your first year order Broad Breasted Whites and at least a trio of heritage poults. That way you'll have turkeys for the table the first year and then can get your flock going the next spring.
* Turkeys can be frustrating to raise - last year was a disaster but the year before we were lousy with turkeys. The poults require more care and fussing over than chickens ever will. But the poults are adorable and the little peeping just slays me.
* Keep your poults inside for up to 4 months! They are slow to develop their immune system. Then introduce them to being outside slowly in a shaded area.
* We love the turkeys - they are fun and funny. And for the work they are a great food value. Some people fall in love with these big goofy birds and don't want to dress them when Thanksgiving comes around. But just like the creepy meats, remember the commercial BBW's aren't long term friends. Name them "mashed potatoes" or something. And don't let them get too big.
* Turkeys can be aggressive the the easy answer is "the pot." TurkZilla, our big tom, is always trying to kill me. But he loves The Big Man. So who knows.. just watch the kids until you are sure the toms aren't aggressive. This can turn on a dime when they mature so step lively.

There is a myth out there that turkeys are SO STUPID they will drown themselves in the rain. That is ridiculous. Young turkeys can easily get chilled so they die from getting sick - not because they can't figure out what is tapping them on the head.  A lot of poultry will stand out in the rain so I don't think they are any different.  We don't think turkeys are any more stupid than any other birds... they just don't like new things and it takes them a while to warm up to changes.

And remember that your neighbors will think its hilarious to go outside and use their turkey call to send your birds into a frenzy. You know who you are! For heavens sakes!

Now go and order your turkeys and discover a whole new fun world of poultry! Gobble Gobble!
Posted by Ohiofarmgirl at 8:21 PM

OFG - Thank you for the quick rundown, this really helps.

You should write a book about all your experinces, Wish I had them years ago :o)

I do the turkey call with my neighbors turkeys - it is so fun! We can talk like that for hours! I give them some veggies later, if we had nice conversation.
Seriously, turkeys are always following me around. I know that they will not do anything, but it is scary to have 20 big birds going at you...

I have a friend who raises mottled spanish turkeys (his are literally lap birds LOL) and I'm getting babies from him in the spring.

Most of the info I get is scientific, not practical so WOOT!

You did an excellent job of "talking Turkey." Seriously, I had know idea that they were susceptable to disease from other animals like that. I think I will stick with chickens and continue to contemplate ducks.

thanks CC! lemme know if you have questions.. hum.. i might post a few resources later tonite.

Thanks Ginny! I really appreciate the compliment. I could have used some of this info myself when I got started.

Oh golly, VRT! Maybe my birds here YOU! ha ha ha ha! Our big tom has flogged me several times he's heavy! Mostly he just screams at me and tries to crowd me. The dogs dont like that so I know I'm safe. And to think I used to snuggle TurkZilla. Sheesh!

Hi Naomi! The Spanish turks are just lovely - you'll really enjoy having them.

Go for ducks, Mr. H, absolutely! But once you get the turks past the "danger zone" (about 4 months) they do ok.

Aint that right GW, aint that right... At any one time the barnyard seems like a prison yard and I'm just an unarmed warden. hee hee hee

One of our leghorns layed two eggs today...how about that.:)

Sounds like she was loaded, Mr. H! Great work on that hen - she sounds like a hard workin' gal!
:-)