So now you've decided to run right out and get a gaggle of turkeys but ... where to you put them? As we learned here, I am the Fred Sandford of farming. I kid you not, I can make something out of just about nothing. Such was the case when I framed in a badly used, yet still structurally sound, shed that was here when we arrived at this property. My brother-in-law, who is a contractor said I should just push the whole thing over, but come on.. its me. So I made do with what I had. 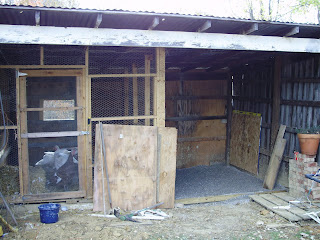 We started with just a plain, three sided shed with a metal roof. So far its housed geese and ducks and turkeys and creepy meats and guineas and even the pigs at one point. After the first winter where it served as a goose day area, I set to framing in the turkey coop on the left. I built a raised floor, framed in the 8x8 area, built the door, and screened the whole thing in using chicken wire. It would have been better to use that wire mesh fabric stuff - but its expensive and since we subscribe to a "coop within a house" theory, we figured it was OK.

The exterior back and side walls is just that exterior siding stuff. We cut a simple hatch/hinged door in the back for the turkey to get to their yard. Inside there are 2 laying boxes (on the floor) and a perch for the birds to roost. It is not fancy but it gets the job done. The coops are set back a couple of feet from the front edge of the building. This allowed a walkway between the exterior doors/wall and the coops.

We used that open area for storage, but then quickly figured out that we could build a 3rd coop right in the center. Our guineas live there now - totally separate from the turks. Aside from the dogs, the guineas are our best watchdogs and therefore are good neighbors for our most valuable birds.

The graveled side on the right is show just before it was framed in much like the turkey side. Instead of a raised floor we decided on just gravel. At that time we figured the ducks could live with the turks - wow that was a huge mistake that I hope you folks don't make. I spent most of the summer with a pick axe trying to dig down 6 inches thru cement-like mud to improve the drainage on that side for waterfowl. Drainage works great now but the ducks aren't going to live here again.

Now we use the right side as a brooder for our turkey hens. This works great. However, we may try and pour cement into the floor. This winter we've had a lot of rats digging around in there. When the weather warms up we'll lock our Shine, King of Barncats, in there for a few nights. Then we'll see who's laughing.  But we'll still probably pour the floor.

This shows the completed, framed in turkey house. 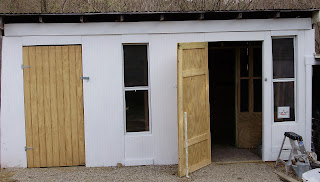 See that we've  added doors on both sides. The guinea coop is between those doors at the center window. We still have an open area between the exterior and interior doors of each coop. The windows were cheap cast offs at a surplus building supply, the doors are just extra heavy exterior siding reinforced with 1x3's (see the propped open door). And we used regular exterior siding to finish off the rest.

If you were to walk up to that open door on the right you would see... 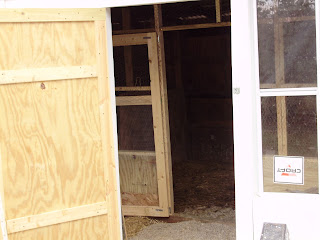 This! See the new coop on the right. It is framed in and covered with chicken wire. The coop door (shown open) is locked up at night so whoever lives there is behind two doors. All of our exterior doors are locked with a clasp that will at least slow down a tricky raccoon. And the interior doors have a different type of clasp. We figure if raccoons or coyotes get into the first door, the guineas will start raising a ruckus and give me enough time to go charging out there, dogs and guns blazing.

There are lots of great plans out there for "real" turkey shelters. Most extension offices have plans or you can find them online here. Or I remember that the Storey's Guide had great info on what you'll need.

With turkeys remember that you need a pretty big hatch-type door for a bird that can be 35 lbs or larger...and you need really good ventilation. Don't worry about it being too cold. Heritage breed turks are extremely winter hardy and like most stock they really just need to be out of the wind.

As far as feeders and accouterments we keep it simple. We like buckets for drinkers (unless there are poults then use a "real" drinker!) and just a $3.99 round metal pan for a feeder. Easy peasy.

So now you have your order for poults in and your gumption up - now get out there and frame up a turkey house!

Anybody else have questions on turkeys? We can just keep this turkey train rolling if you'd like.
Posted by Ohiofarmgirl at 8:38 PM

I think your doing a wonderful job and I also think your a gutsy lady that gets things done!! The shed looks good to me and I think you made great improvements
to safeguard those birds...I'm learning that country life isn't all easy...Only thing I can see is the door sill, a snakes head is very small,(ask me how I know). is that sill low enough to keep one out?

Nice job OFG! I mean real nice barn there. You are one handy lady, building that up - them turkeys will sure be comfy in there..

Wow! So ambitious and industrious! It looks wonderful.

I love how you built your bird house right into that shed, very nice. Fred would be proud of you, although I think he let his son do most of the building...I just can't see Fred building anything:) "Coop within a house"...I like that. What a great setup for your flocks. Stay warm.

OFG - Very good explanation on housing. No old buildings around here that we can convert so we are going to have to build something from scratch...gulp!

hi Ginny! Yep there are some "leaks" but we don't have snake problems here. I cant bring myself to tell you what happened when 18 baby ducks confronted an unwelcome snake in the yard. But I need to keep an eye out for weasels and such. Good thinking!

Thanks Grandpa! I'd never done much construction before - aside from putting up a picture on a wall. Now I can build walls - who knew!?

Hi Pom Pom! and thanks for visiting.

Its gonna be a COLD next couple of days for sure. I might have to snuggle with the flocks to keep warm!

Oh geez, Chai Chai, I just posted something different. Please stand by for an easy shelter... in the meantime check out the geese and add a couple to your poultry order.

We thank you for such information on turkey shelters.I wish I had an old barn like that to start off with.but I don't and I don't have a big farm just a back yard and boards from palletts I and my husband have collected from different businesses.How can we use them if possible to build a shelter,we also have some chicken wire and poles.We are are on fixed incomes and not out in country ,but have a nice size back yard (renters of course).We have chickens 13 young right now about 6 weeks,turkeys 1 about 4 weeks one about 1 week,geese about 4 weeks 2,and ducks we just got two days ago I guess they are about a week I am not sure how old they let them before they seel them we got them as soon as they came in 4 of them.Can you give me advice on building shelters for them at an affordable rate.

Sure! you can build anything out of pallets. Use 3 to construct the sides, and then either use one for a roof (sloping of course) or find some plywood. you could probably even use those poles with a tarp as a roof. the 4th wall can be your door. we built one using cupboard doors for them to get in and out. the big thing is to secure it with the chicken wire. assume raccoons and other varmints are gonna try and get to your birds.

you can also try craiglist for "materials" you'd be surprised what folks give away for free - or place an "need scrap lumber" ad. sometime people want to clean out their garage and have a few scraps of wood laying around. also check out Home Depot - they often have a "cull lumber bin" with GREAT stuff for $0.51 to $1 per piece! i load up every time i go. if you dont see it - ask the lumber dept manager, he probably has stuff he'd make you a deal on.