Baggin' up and hanging low

The goat ladies are starting to show the signs that kidding season is upon us! 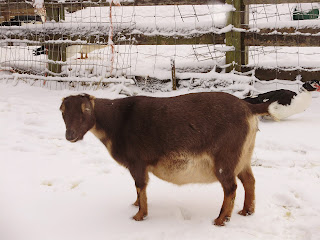 Nibbles, aka "Tubbie"... hanging low. She's almost as wide as she is long. As a comparison, this is what Nibble should look like. At any moment her belly might actually drag along the ground. She still has about a month to go!
Debbie, who never gets very round is starting to make an udder in preparation for the babies. This is also called "bagging up" in goat speak. Her body will make the first milk, or colostrum, which is so important for babies. 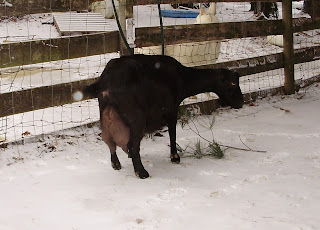 Its getting to be about time
Debbie is a heavy milker anyway but when she's about to kid (have her babies) she will have a really full udder. Sometimes this can happen all at once - we went out about a week ago and poof! Her previously empty udder was getting full, now its getting really full.  Soon it will look like its about to burst and look shiny. That's when you know to get your bottle of tequila and call the 4H neighbor kid.

When she is getting ready to kid your doe may also start to act funny. While she always ran away from you before, now she might want you to rub her all over. She might be moony and looking around with a funny look in her eye. She will start digging a nest. Or if she is Nibbles she will lay there and moan. For hours. And she may not eat but I'm pretty sure Nibbles was eating while she was kidding so that may not mean anything. 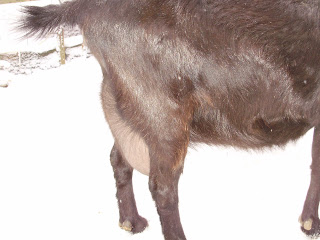 Debbie's beautiful udder - makes me think of cheese...
Because Debbie was acting funny I asked the Good Neighbor Mom and her 4H Kid to come over last nite and evaluate the situation. They laughed at Tubbie and then got to business checking Debbie over. The first thing they did was feel the ligaments around Debbie's tail.

Normally the ligaments at the base of her tail feel very hard - almost like bones. But when kidding is getting close the legaments get all mushy and in fact you might be able to (gently!) pinch your thumb and forefinger around her tail. One of the signs that labor is eminent is that your does tail will be held at a funny angle - like its broken or about to fall off. Don't panic this is normal (but you should panic because labor will begin soon).

The Good Neighbor Mom and the 4H Kid both declared that Debbie's "ligs were gone" and then excitedly looked at the goat's lady bits. As I am the most modest person on earth I put a bucket over my head with embarrassed while they ooohed and aaaaahed.  And no, I'm not putting pictures of that up on this blog. Suffice it to say your doe's hoo-hoo will be swollen and goopy when its time. Debbie isn't to that stage, yet.

My experts said that it will probably be within a week. We agreed that the next big weather change - which will be this weekend - will probably bring it on. Normally we would count on the next full moon but that's a couple weeks away (probably when Nibbles will kid) and there is no way Debbie will last that long.

When you live without a real sense of time, other than the daylight hours and the season, you learn that the phases of the moon and changes in nature really have an effect on not only animals but people. I'm not talking about astrology - but the "farmers almanac" type of how the moon and the earth's gravity affects living things, water tables, tides and such.  So we take these things under consideration. Debbie doesn't care if she's due on Tuesday but the barometric pressure change will probably get things going.

We'll be keeping a close eye on things. With this extreme cold weather we set up a heat lamp, put a lot of fresh bedding down, and made sure everyone was comfortable.  I'll do extra checks on the goats and keep the 4H Kid's phone number close.

Happy Thursday everyone! Now lets hope for 2 beautiful doelings from Debbie!
Posted by Ohiofarmgirl at 9:22 AM

Here's to a stress free kidding for you! This is the first year I haven't had kids due this time of year and I'm glad. It's c-c-c-cold out there!

I've got my fingers crossed for you! Yay for skip-poppin goat babies!

wow Nibbles is hanging very low. I bet your over excited for the babys to come : )

It's supposed to warm up this weekend..hopefully she will have them soon!

Wow, they are big!

(don't tell the girls I said that)

I hope everything goes really well and am looking forward to your new mommy posts.:)

Thanks GW! Hopefully I'll just go out in the morning to happy little goats. HA!

Thanks Java! But you take the cake for adorable babies for sure!

Nibbles is ridiculously big, Periwinkle, she can't possibly get any bigger. I hope.

Thats what I'm thinking, Robin. This early kidding is new for us we would have liked to wait for March babies..but you know how that goes.

I'll give them your good wishes, Mr. H. Its kind of nerve wracking but all we can do is drink a lot and call the 4H neighbor kid.
;-)

Can't wait to hear about when they have the babies & see photos of them. :)

I can't wait to see pictures of little guys! I hope all goes well and stress free!

hi Charlotte! Nothing to report this morning (friday) but hopefully in the next couple of days.

hi VRT (or should i refer to you as Ana?? i dont know...) Nibble's babies were so darn cute last year - they are sure to be beautiful this time also. Hopefully Debbie will have some little girls - good milkers for sure.

Crossing my fingers for lovley girl babies :) and that you find them all cleaned up and nursing. That is my favorite way to find lambs!

Oh, they are so cute. I just love new babies. Cannot wait to see newborn pictures!