After last year's drought I swore that I would not complain about the rain ever again. So this isn't a complaint - it's just a point of fact. 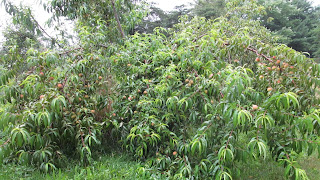 We got our first storm casualty. One of my young peach trees broke under the weight of the peaches and the rain. 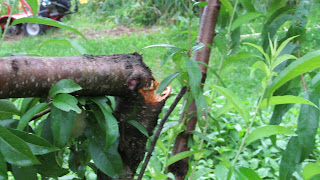 These are the compost peach trees that just grew where I threw out the pits a couple summers ago. They grew like the wind. But apparently the wind was just too much for one of them last nite. This tallest one just snapped.

On the upside..... doesn't look like I'll have to turn on the sprinkler anytime soon.

Anyone else not complaining about the rain? Might as well sing about it... Songs About Rain.

Posted by Ohiofarmgirl at 7:46 AM

Ok, are we the ONLY ones NOT getting rain? We had a good spring with rains enough for a decent haying, but now not a single drop for weeks!! Gawd, I hope this isn't the FOURTH year in a row for a drought.

Oh, and did your compost/volunteer peach tree put out decent fruit? I'm so sick of "experts" telling me I just can't stick a pit in the ground and let it grow. I should have been putting "throw away" peach pits in the earth for like five years now.

Can you save any of the fruit?

Drat is right! I would be unhappy to lose a loaded fruit tree.

I'm so sorry. I don't know what else to say. You know it and I know it, it's all part of the deal when you sign up to grow/produce your own. I guess that's what makes homegrown peaches that much sweeter. On the upside, if the tree hasn't snapped all the way through it may still be able to live enough to ripen the peaches before you cut it off . . . it might be worth a try?

yep, Carolyn, i think its just you. sheesh we have had plenty. i need to take off another cutting of alfalfa but cant even think about it. and yeah i KNOW! these peaches look stunning. i'm kinda tired of everyone telling us what wont work.

hi Wildcard! i dont know - i'm going to give it the old college try.

thanks Anton, i know you understand. i'll see if that little tree can hold on. we are sooo close to ripening i hope it holds out.

uh, i wonder of it could be fermented???