The funny thing about meat-style birds is that they seem to grow exponentially. We see this a lot with the creepy chicken meat birds but wow the meat style turkeys really surprised us. One day they were cute like this..... 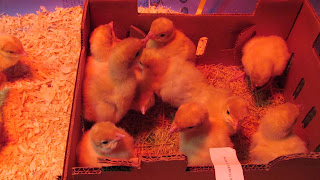 Day One of the Great Turkey Project - new arrivals.

And over night they became this! So we had to implement an emergency turkey plan. We needed to get them out of the house. 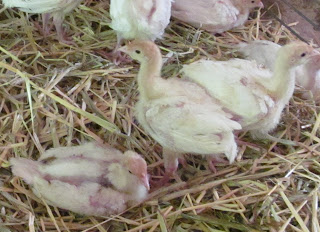 They got bigger. Fast. They are now about a month old

As with most day old chicks, the baby turkeys (called poults) started out in a tub in the basement. The peeping is cute for about a day. But then the dust and the noise and the over-interested house cats kind of take the fun out of it. Then the other morning I found that the poults doubled in size over night. 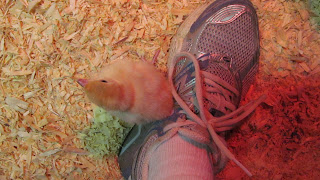 Little turkeys are very small. And adorable. Shoe for scale.

So we needed to spring to action. We quickly shoveled out a spot in the garage and whacked together a pen. Our original plan was to move the meat chickens over to the chicken house and put the poults in the turkey house. But a rascally varmint changed everything. We still haven't caught that slinky mink but we brought in a huge rat haul. We still aren't taking any chances. 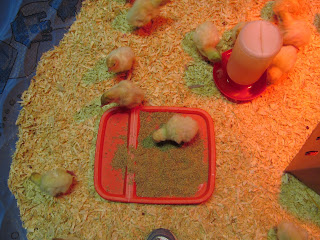 The tub set up inside. Totally works like a dream. Until they get too big.

The big differences between meat chickens and meat turkeys (this variety is called Broad Breasted Whites) is that the poults tend to be a little more tender requiring warmer and more stable temperatures...and... well.. the chickens tastes like chicken when its time for dinner.

The poults are also, relatively, very expensive. So you don't want to take any chances with these expensive and not-hardy birds. Starting them inside is a great idea. I got 20 poults for about $99 from Ideal Poultry - which included the tax and shipping. This is the best sale price we've seen all summer. 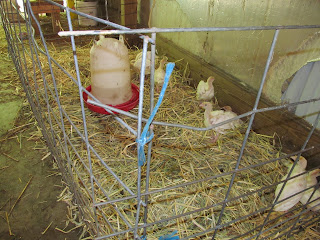 The new pen set up outside. Totally works like a dream. Until they get bigger.

We decided on an easy to assemble pen based on materials on hand. We used small sections of hog panels for the ends and one half piece for the side. We used fence stables to affix the sides to the posts in the garage and then just tied the side piece together with baling twine. This made a remarkably stable pen. A few shakes of straw and then we proceeded with the turkey transport. 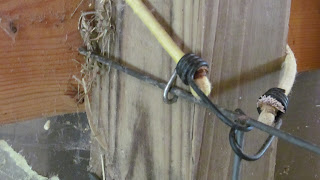 We used fence staples to affix the hog panel sections. Bungee is not necessary but I am over cautious.

Initially we were only going to put half the poults out in the garage but when we saw how happy they were to be in the great outdoors - which they could see from the safety of their pen - we took the rest of them out. Once they were out of the house my allergies immediately improved about 85% so everyone was happy. 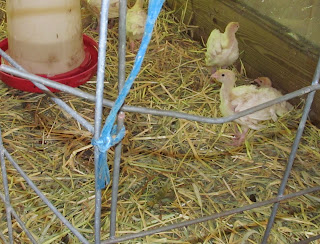 We tied the long side of the pen with baling twine. You can use this stuff for anything.

Because we've had the heat dome oppressing us we didn't need any kind of heat source for the poults and they were just about ready to feather out anyway... so they did just fine. We set up a fan in case they got warm but really it was just about the right temperature. 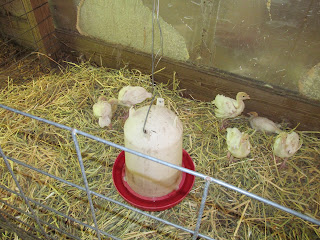 Their initial reaction was stunned silence. They they loved it.

We are going to expand this pen for them so they have more room and because we figure we can just keep them in there for a while. Like most folks in the Mid-West we really only effectively use about 20% of the space in the garage - which is really a big 1.5 story pole barn. So now that we are properly motivated we are going to do a big clean up and we may just keep the turkeys in there until they are called to dinner.

I kind of had a funny image of opening the big sliding door and a herd of huge turkeys would come wobbling and gobbling out. So if only for laughs I'm going to get that garage cleaned out.

Meat style turkeys can be slaughtered at about 4 months. So by the time the weather cools we'll start hauling in the turkey harvest. But for now these little buddies are my milking partners. They are hilarious at this age - trying to strut and gobble - its very funny.

That's the update so far. Stay tuned for more on how to raise turkeys.

Happy Sunday everyone - do you have turkeys in your house? Garage? In the turkey house where they should be?
Posted by Ohiofarmgirl at 8:36 AM

Yesterday I decided that our four week old chicken chicks would enjoy a day outside and took them to the meet the quail.

Mutual astonishment and horror kinda sums up the introduction of chickens to the quail pen.

Half an hour later the chickens own the best part of the coop while the quail pretend to not notice and look cool without ever turning their back to the chicks.

No fights, just, well, horror. The "them things is not natural" kinda look.

At dusk the chicken chicks started peeping loudly. I went over to see what was wrong. They all rushed the over so I went in. They clustered around me and PEEPED. At first I thought they were hungry so I topped off the feed bowl.

Nope, still peeping. I held my hand down low and right away one came over to be picked up. I picked up the box I'd carried them over in and dumped the chick inside. The others came over one by one to be scooped and dumped. All except for the dumb one who ran around and around the box until I could finally grab her.

I took them back inside to their home box and dumped them in. Quiet peeps of happiness ensued.

This morning they went back out to once again be the Chickeny Lady Gaga fans in the Quail Biker Bar. They'll have fun.

We don't keep meat birds at the moment because we have thirteen sheep and lambs we need to process into the freezer for meat over the next year, so we can bring the flock down to a manageable size!

Some day I will have turkeys. Too bad they can't share space with chickens.

hey Chai Chai - i let ours roam around with the chickens but its best to keep them separated. the toms can be quite mean - especially to the roosters.

How do you store your turkeys in the freezer without getting freezer burn?

hey UPeacock... sorry for the delayed reply. we've never had a problem with freezer burn. i think its because we dont freeze them whole but rather "parted up" into easy to manage portions. then we wrap well in wax paper, squeeze all the air out of the good-quality-freezer bags, and thats about it. does that help?
:-)