Freakin' the turkeys out with milk

The turkeys are growing like bad weeds. That's the good news. The bad news is that we are going to have to hurry up and get them new accommodations sooner than we thought! 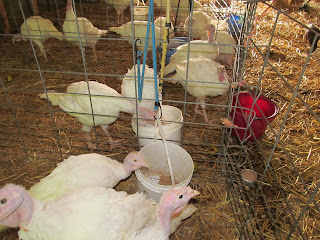 Since these pix at the beginning of August the turkeys have probably doubled in size. They seem to be growing at a rate comparable with the grow out chart on the Meyer Poultry site here.  We've expanded the turkey pens since then but they are growing exponentially so we need to get them into their new digs fast.

We also have to get them out on pasture. It's a tricky thing. At just over two months their immune systems should now be able to handle anything - including the cocci we know we have in our soil. But with these hot and humid conditions we could be taking a chance. So it's a tough call. We think our best bet is to put them out where it has not been intensely grazed... so that means doing more fencing to expand some areas. 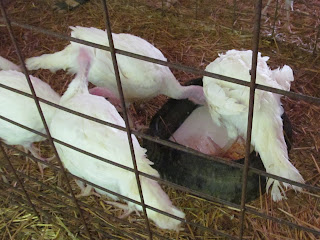 Freakin' turkeys out with milk and corn. They lost their minds.

In the meantime we are freakin' the turkeys out with new things. Including milk. Our big plan, once they got to a certain size, was to feed them out on corn and goat milk like we do with our meat chickens. There's just one problem.....

.... turkeys don't like new things. So we are introducing them to new and amazing things like milk and corn. They were totally freaked out. I have a couple groups who are excited about the milk, one group who are just darn good eaters (their feed bucket is always empty), and one stubborn group who don't like anything new at all. They are going to be the tough ones for sure. But they had better get with the program. We could be calling a few of them to dinner as early at the end of September.

That's the story here. Anybody else growing out their turkeys? How are your gobblers?

Happy Wednesday everyone! Now get out there and freak out your turkeys!

Posted by Ohiofarmgirl at 7:55 AM

They probably have tons more space than they give the butterballs. I have never raised turkey but if they grow that fast it might be worth trying a couple next year just to see.

Oh, you gotta love dumb birds. We use to put marbles in with their water so they would peck at the shinny object and get a drink at the same time. Oooooo, shinny!

That's a lotta meat you've got there!

yep, SBF, you should totally try! the only thing to remember is that they are more sensitive than chicks.. they need to be a bit warmer, need more time/help to figure out new things, etc. but it takes just as long to process a turkey as it does to do a chicken - and you get a lot more meat!

anything shiny is amazing to them, herdog, they always go for my wedding ring! ha!