Yesterday we had a glorious chicken harvest. We left two of the creepy meats to grow out to gargantuan size but sent the rest to their glory. Today after church we'll be having chicken dinner and I'm thrilled. 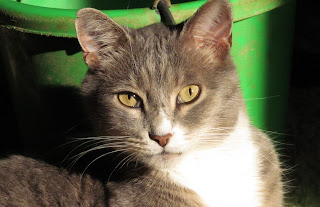 This is a pretty farmy discussion so if you are freaked out, just look at Little Mo.

One thing some new-to-home-butchering folks stress out about is how to decide which of their flock is going to be "first." Along from the typical "first time butchering jitters" this is a pretty common question. So let's talk about it.

For us, it's easy.  As we say around here, "When you start to crow, you got to go!" Roosters are always first. They tend to grow faster and bigger. And sometimes they deserve it. There is always at least one rooster who matures early and turns mean. This batch was no exception. He was immediately named "First" and when butcher day rolls around - he was. 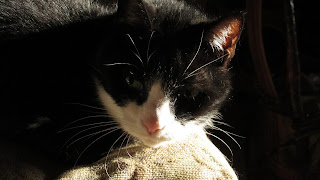 Or Teddi, who could be upset looking at Teddi Grumpkins?

Even tho our latest round of on-sale-extra-cheap creepy meats were supposed to be all hens we ended up with one roo. He was terrible. He flogged me, such as it was, if you could call it that. He waddled right on over and hurled his rolly polly creepy meat carcass right at me. Mostly just he proved that large, heavy bodied, white chickens can't jump so mostly he took out his rage on my sneakers. But he got my hands pretty good a couple times.  We had no problem pulling him out of the pen first.

After we took care of First then we had to turn to a pen full of other volunteers. Our strategy for choosing who's Next after First is.. who is biggest? We start with the largest and just work our way down to the smallest.

This relieves some of the tension and we don't need to have a discussion about "well, Clucky over there sure is cute... but she's looking mighty tasty... and Pecky over here looks about right...." Not only do we not name our meat chickens, but this really isn't an effective strategy. If you are already stressed out about your chicken harvest than having this kind of personal attachment is probably going to make it worse. We generally just refer to the flock of meats "those guys." They are The Entity That Is Creepy Meat. None are singled out, except for First, and we leave it at that.

Also, going from biggest to smallest helps because once you've reached the tipping point where the meat chickens are ready for action.... you want to make sure you get them processed before they start flopping over dead. The two meats that we left were the smallest of the bunch. By having the biggest go first and we hedged our bets that if we got tired half way thru our day and had to stop processing we wouldn't have any creepy-meat-heart-attack victims. Or any of this grossness.

How does this work for the pigs? About the same. Usually there is one that steps forward and that is our volunteer. Whoever gets out of the main pen and into the shooting area has volunteered and there you have it.

As we get closer to Turkey Time we will have a rolling harvest of processing a few turkeys at a time. However, we have our eye on a few of the toms (actually at this point they are jakes). One will be left to grow out to supersize and we'll just pick the next largest as our first volunteer. Unless we end up with one named First. Then he will be.

And that is how we get 'er done around here. What about you? How do you decide who is First?

Happy Sunday everyone! Now if you will excuse me I've got to go and get some chicken soaking in buttermilk for our supper.

Posted by Ohiofarmgirl at 9:11 AM

Thanks for learnin' me about Green muscle disease. We had some of this with our last batch of evil white broilers. We ran out of time and had to get white ones last year instead of the much, much better Red option. WHEN WILL I LEARN!?!

We do it just like you do. And I have to admit, if there is a "First" and "Second", I usually have a big grin on my face. Nothing is more satisfying than "That Peckerheaded Mean Rooster Dinner".

Back when we had livestock, I loved each and everyone of them. Named them food names. Like the pigs, Bacon, Ham and Pork Chop.lol that was the best meat I ever ate. Was grateful and knew they went quick and relatively painlessly. Tough farm lady here I guess. Even enjoyed the butchering process. Thanks for this article, good for many to read.