Can you believe it's August? Gosh it seems this summer has moved really fast. We all kind of feel like summer left early because of the cooler weather. Even the newsfolks were complaining about it. 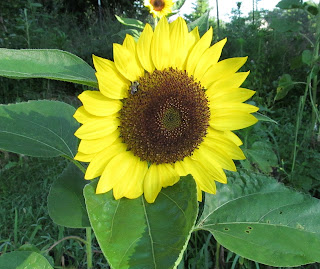 I'm not complaining at all. I can get so much done if I don't have to give up before noon and come in because of 90*-100* days. Plus it's easier on the livestock if we all aren't heat stroked.

Now that we are about two months away from our first frost we really have passed the point where it makes sense to start anymore summer projects. This is kind of a sad realization because I'm not a huge fan of being stuck inside during the winter. So instead of hopefully looking forward to getting things started... it's time to start closing things down.

We've had some huge successes, tho, so far this summer.

1. My home made hay project. Totally an A+. We haven't had to buy on bale of hay all summer. The hay has worked out perfectly, has lasted this whole time, and it cured beautifully. We'll have enough to keep up for the rest of the season but we will not have enough to overwinter. So we are planning on stocking up on 2nd cutting hay soon.

2. The wood chips. This free windfall has truly been a blessing. I had a bunch of haters try and tell me that all my plants would die because I didn't let the chips age. My plants are fine. None of them flopped over and it's been a blessing to have the weeds suppressed. The only down side is that I have to haul them down the drive and up into the Upper Garden one trolly-load at a time. I'll give it a strong A, but not a " + " because of the one load at a time thing.

3. The goat's new free range area. Totally has worked. Once those girls figured out they can walk themselves down to the new fenced in area  - and not need me to stand there and hold their hands - it's totally worked. The goats are making progress mowing down all the bramble and they couldn't look better. Debbie, who was so poorly last winter, looks beautiful - really the best she's looked in a couple years. Nibbles looks like a fat and happy seal. A+

Losers:
1. The garden. It's been OK but not great. I've had to spend so much time on clearing that the garden has just done "meh." Plus the cooler weather isn't really that great for growing. The best thing about this region is that hot swampy weather that grows summer food like gangbusters.

2. The peach tree. *Sigh* It will be great next year but the amount of toppling over has been tragic. Next year, little tree, next year you will be a superstar.

3. The chickens. While the meat chickens have done great, the flock of laying hens has been a bit mismanaged. We found a lot of "hidden" nests which is only a big disaster. And it seems like there has been some attrition. I haven't found any bodies but I think we are missing a few hennies. We haven't had a successful hatch either so we don't have new layers coming up in the ranks. Truthfully we need to "clean house" and send some of the older hens to their Great Retirement in the sky. But the chickens are the best part of my day so if the only thing they do is greet me with happy clucking every morning then that is OK.

That's the update so far this summer. How are you doing? What are your winners and losers?

Happy Tuesday everyone! No get out there and enjoy the cooler weather!

I agree about the high temps we usually are experiencing this time of year. I prefer it cooler also, I get much more done in my garden when it is cooler. Unfortunately the cooler temps cause the summer crops to slow down. My favorite gardening season is fall. I love your sunflower picture, I always say sunflowers are happy flowers!

Love the Winners/ Losers format ! I agree with you on the chickens (feel good syndrome), they make a farm feel (farmy). Like to see em running around with a special find in their beak as the others try to catch and dislodge it ! Maybe this next spring you can order a nice barnyard mix, As always, thank you for taking the time out of your day to share with all of us ! Todd

I'm in winter, so just for fun, I'll tell you my winter winners and losers instead. Winners are the cherry tomatoes (bet you didn't expect that, I didn't either), they are growing better now than they did over summer. Losers are the guinea fowl, we started with 10 day olds in January, the dog ate one at a few weeks old, and then recently we let the remaining 9 free-range, but the other night they would not go back into their cage, and now there are only 7.... and they're not allowed to free-range any more... (it wasn't our dog the second time, probably a fox).

Always good to take stock.. Sounds like life the good with the meh.... Gonna get some winter pigs?

Thanks 4tloG! Sunflowers are my favorite. I guess you could say that the flowers work better in the heat - just the opposite of us.

Thanks Todd! I just love my hennies - they are always doing something and usually its pretty funny.

Tomatoes in the winter? Huh.... Sorry about the guineas - they have a very high attrition rate for sure.

Nope, Dave, no pigz.. at lest for now but you know that things always change around here. ;-)