This just in!  Barnyard Tonite reports a salacious new scandal. Sources close to the barnyard report that OD, the gander, was involved in an affair with a DUCK....while his mate, Penny, set her nest!

Compromising pictures were anonymously sent to BYZ (BarnYard Zone) showing OD engaged in a romantic affair with Miss Dash! The two were seen canoodling by the gate but denied that they were there together.

But then these shocking photos revealed the truth: 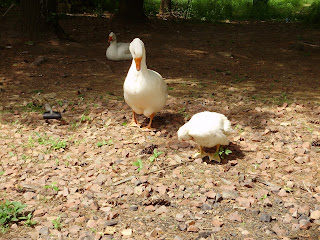 We see OD leering at Dash by the turkeys while a shocked Daisy looks on.
A witness on the scene, Daisy, said they looked awfully cozy together. Representatives say these photos were Photoshopped and while both sides admit they were there at the same time, it was just a publicity stunt.

But neither side could account for these damning photos: 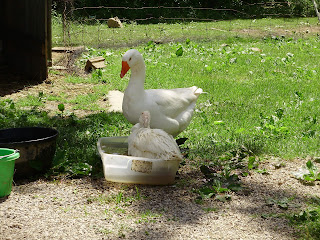 Like David admiring Bathsheba, who can deny that these two being "more than just friends."
Especially when leans in for a quick peck.. 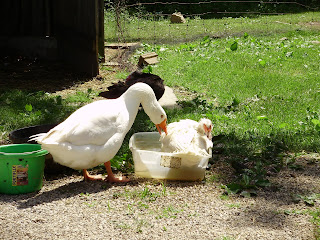 She pretends to bat him away... 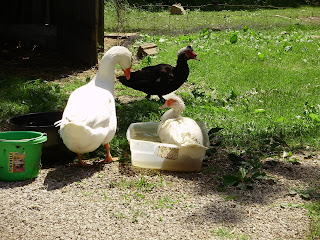 "Stop it," she coyly said....than fluttered her eyelashes.
The shocked looks on these faces tell the truth - Dash is a home wrecker! 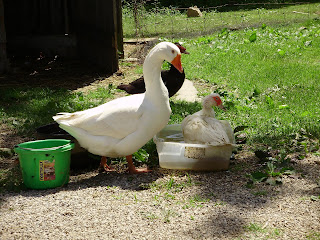 Ashamed, they realize they have been caught.
The hens are all a-cluck over this story condemning OD, new father of 8, who's marriage has previously been heralded as a model in the barnyard. Its clear he has been ruined. Sources close to the philandering gander say that he needs rehab as he clearly has an addiction...while those near Penny's camp say he just needs a good beating.

Runner, the turkey hen, tweeted her support to Penny and said  that "The mate is always the last to know."  While Miss Duck, who has previously been linked to OD, said "What did Penny think would happen? I mean, she got all fat while sitting on her nest - and that OD is a real gander." 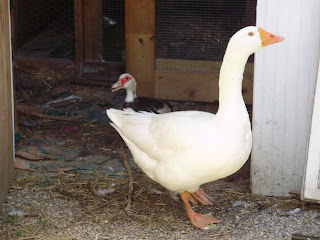 Miss Duck seen here with OD, claims she is not a gold digger.
Its yet to be seen if Penny stands by her gander, but our polls clearly show that she should kick him to the curb.

And what of Miss Dash?

She says only that she wants "the truth to be known."  But its been heavily rumored that she is being paid well over 2 full bags of corn to publish her tell-all book "Forbidden Love, a tale of Goose and Duck."  She told reporters that she was approached by PlayDrake to do a centerfold, but she refused saying that she "has more class than that."  It remains to be seen whether any love children will hatch out of this...this... dangerous liaison. Our sources say that Jerry Springer has been contacted to do DNA testing to prove who's the baby-daddy, just in case.

There is no word on whether there will be a custody hearing. For now the family has been holed up in the Goose House and have been keeping reporters at bay. They have been repeatedly swarmed by the paparazzi (the beez) and have pleaded for privacy in this difficult time.

We'll have more updates as this story unfolds.
Posted by Ohiofarmgirl at 10:24 AM

I knew that the lack of a Mr Duck would end up becoming a problem.

This could also be the ducks way of getting back at the geese for moving in on their territory. Could the ducks be upset that the Meeps are in the house on the couch with nappies eating their popcorn - this was once a duckling only zone.