We have new arrivals!

Quite possibly the most beautiful clutch of chicks we've ever had... Thanks Mrs. Dowlrimple! 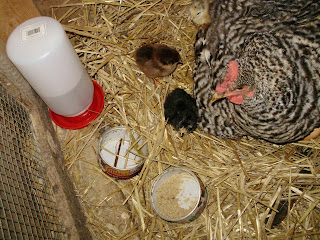 This barred rock sat thru the hottest days, face into the wind from the fan, determined to hatch.
There are 9 lovely little chicks - several barred rock mutts, a couple all blacks, and some absolutely stunning babies with coloring I have not seen before. Just like this chestnut beauty here: 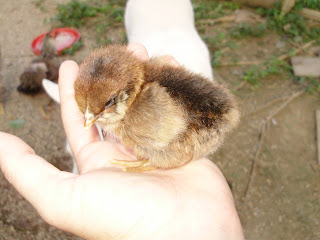 You can barely see that she has tufted ears, clean legs, and is a perfect little puff ball. 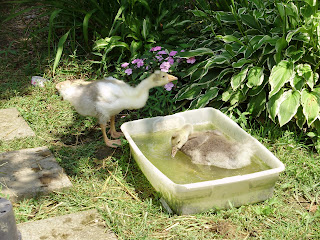 And look who is so big!
Our inside Meeps - who are now the outside Meeps... are growing like weeds. They finally moved out of their cage in the basement and are outside in a brooder coop in the turkey house at night. We call them DB (Dark Beak) and Little G.  The other geese - OD and his crew - still don't show any interest in them, but we keep these little loves in the fenced front garden and out of harms way.  They spend the day eating grass and splashing around in their tub. We'll move them up to a kiddie pool soon.  Remember when they were so little!?!?

All of the little goslings are starting to get their first feathers - and they have some heft when you pick them up. DB still loves to snuggle - and he has so much personality. We say "he" because he seems bigger and much taller than the others. However, I can't tell males from females by "vent sexing" them - so we go by behavior and size.  They sure are cute. Still no explanation why DB has a dark beak and dark feet....when none of the other geese do. Humm... Penny, you might have some explanin' to do......

Farm Notes: (wow this has been a while!)
* The heat is ON... our hot weather has continued and is causing all kinds of problems. The cycle of hot and wet and hot and wet is great for the weeds.... and to get on my last nerve. The gardens need to dry out as everything is soggy and the blight has set in on the tomatoes.
* I have battling broodies right now - one of the Banty hens vs another barred rock. They have been fighting over a clutch of eggs...and the eggs are loosing. I moved Mrs. Dowlrimple and the new babies into the center brooder....and put the other barred rock in her place. I hope she sits back down. Nothing but chaos in the laying boxes....and those ladies are hiding their eggs.
* I was off farm for a while last week - and came home with a nasty sickness (thanks "civilization") so now I'm about two weeks behind. Everything has been growing like weeds - including the weeds and I've had to abandon the idea of getting a few more beds in. Now I need to get busy and start fall produce seeds.
* The potatoes are doing great! We'll dig some as needed and leave some in the ground to cure for storage later. Also the pumpkins are taking over that hillside and will be spilling over into the potato beds soon.
* The squash bugs have been on a rampage - but not doing as much damage as before. We've had some losses - but may have managed to save PumkinZilla. I'll harvest what I can and then rip out what is hopeless. We spent some time taking off leaves that had those stupid copper colored eggs on them - and burned them. Hopefully we'll stem the tide of new squash bugs. The guineas seem to be doing alright.
* The goats are starting to come off their peak milk production. We got some better, more alfalfa-y hay. That has helped. We also need to wean Ginger completely off Debbie.
* Hens are also off their peak production. The heat stresses them .... and they don't lay as much. And... like I said, they are hiding the eggs. I found a huge clutch in the garage.
* Ducks, ducks, and more ducks. Miss Puddles' babies are doing great. When I left they were the size of golf balls... now they look like ducklings. She seems to be doing better - and not going down to the pond and leaving the little ones in a heap by the duck garage!  The other lady ducks are laying so I'm getting several eggs a day. Oh the custards they make! And just a joy for baking.
* Bramble, our second best turkey hen, has a terrible wound under her wing. Since she likes to lay in the brambles (hence the name) we think Foxy Brown got her. Thankfully she escaped but not without being scalped on one side tho. She is cooling her heels in the bachelor coop -- the first cool day we get those jakes are getting the axe -- so she'll have the place to herself and we hope she'll start another nest.
* Runner, the turkey hen, and The Kindergarten are a hoot. Runner has taken to chasing the guineas.... and also Little Nibbles! When I open the gate to let Nibbles up to milk, Runner makes a mad bee-line and chases her off. The dogs think this is hilarious.

That's all the news that is fit to print. Happy Summer everyone!
Posted by Ohiofarmgirl at 10:53 PM

We have only raised chickens for a couple years now and I was wondering why their production has slowed so much this month. It's been very hot out the past couple weeks, now I know. Thanks for the tip. Nice pictures.:)

Yep.. its really frustrating. We've been trying to pace when our hens hatch clutches so we have "new layers" at different time of the year. It seems like only yesterday when we had too many eggs... sheesh! Hey you hens! Start layin'!