That's a lot of Ginger!

Would you look at that - Ginger is almost as big as Debbie! 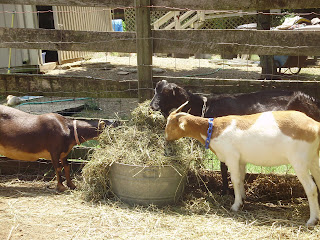 Nibbles, Debbie, and Ginger belly up to the hay barrel
Remember when Ginger was little and cute? Golly - she's bigger than Little Nibbles (on the left) and almost as big as her momma, Debbie, just behind her.

As leggy as Ginger is, she seems a little thick for a dairy gal. We intentionally bred Debbie to the neighbor's Boer buck (the meat goat breed) thinking we'd have a little cabrito for the grill... but with her La Mancha face and long, thin legs, Ginger seemed sooo dairy when she was young we hoped that she'd be a good milker. Debbie, her momma, is an incredible milker so there is still a lot of hope. We'll breed her in the fall and hope for the best.

Unlike our other gals, who we bought polled, we let Ginger keep her horns. There is a lot of controversy about this horns vs no horns. But we figure that they are there for a reason so might keep them. So far the only one who's gotten stuck anywhere is Debbie - and she doesn't have horns!  And there has never been any problems with her bullying any of the other ladies. As the youngest she is so far down on the pecking order that we don't think it will be a problem. And Little Nibbles is a spitfire so she won't be pushed around.

Ginger's brother, Gilligan, is a stunning 4H wether. He's headed for the show ring and with his broad chest and striking pose, he's sure to be a winner. Our county fair is in October and we are excited to see how he does.
Posted by Ohiofarmgirl at 7:39 PM

County shows are happening all around us, do you ever enter anything?

hey CC! GREAT work at your place - the sheep barn is amazing!

Our fair is in October - one of the last. Nope, we never show anything but I have one humdinger of a zucchini that will beat them all. So maybe on this will be the year.

We just go to support our 4H neighbor kids.. they show pigs and goats. They always do a great job and wow they get top dollar for their projects. Its wonderful to see a family working together. We go and cheer from the stands for our favorite kids! Whoot!

Our county fair is this week. I'm specifically going Friday morning for the goat show as part of my journey in familiarizing myself with them. My two will be ready for 4-H in a few years and I can't wait to jump into it. It was some of the best times I had as a kid.