It's a hatch! Meet Red

I had just about given up on Floppy - the little hen who's been setting for a while now. In fact I was on my way inside to figure out if she was past due when I heard the cutest little sounds in the hen house. Yep! Its a hatch... here is one of the latest arrivals. Meet Red: 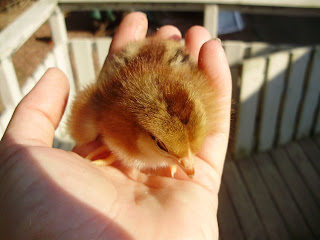 Golly -  is he a cutie or what?
I think she has three chicks so far and another 4 eggs under her. So here's hoping for a full hatch!

But the cuteness didn't end there.

The goats were more fussy than usual up on the milkstand and I couldn't figure out why. Until, that is, I noticed Bianca fussing around on her nest.

Bianca, or Pig Pen as we are calling her, is a little white "micro duck" that I snatched out of a buddy's barnyard. We lost the only micro (or dwarf) duckling we'd ever had...and Bianca was so cute.. so she came home with me. If the full sized lady ducks weigh about 4 or 5 pounds, Bianca weighs about 3 pounds at most. The other ducks were giving her a hard time so I let her start a nest in the garage near where I milk the goats. This way I could keep an eye on her. The barncats don't pay her any mind and she is happy there.

So this morning she was fussing all around and...there it was. The reason the goats were hopping all around.. I had to listen close but  I could barely hear little peeping! So I looked and sure enough there was a little face looking out at me from inside her shell.

That full moon we've been having sure does have its way with things.

Happy Sunday everyone!
Posted by Ohiofarmgirl at 11:32 AM

Thanks LBSS! I'm so glad...she's doing great. Looks like five little ones under her now!