So we learned the other day that "chillax" is now a real word and in the Oxford dictionary. Hum. Well, I'm not hip, urban, nor superfly but I do like modern lingo so.... 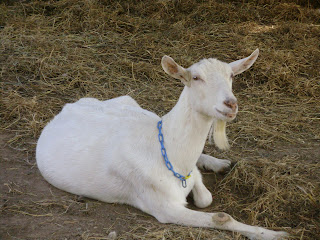 Yo Vita! How's that chillax goin?
And now something entirely different.. cover crops.

The other day Tammy had a few questions on the cover crops I planted this spring over in the comments on this post. So I thought I'd just answer them here as we are getting into the fall planting season.

Q: I keep reading about them, but don't really know exactly what to do with them.
A: Easy peasy! Call up your local extension agent and ask them what would benefit your soil for your area. Or just ask an old timer. Whatever you do don't ask at Home Depot or some place like that. They will look at you like you are out of your mind. Don't ask me how I know this.

Around here the best thing is to plant winter wheat in the fall. It grows even when the temp is barely above freezing, then really comes on in the spring.

There are whole sciences on the "right" cover crop. But really - any legume will add nitrogen to your soil...and just about anything that grows will provide root systems to help the soil. The wheat works really well here. We also planted buckwheat in the spring because it grows well in our bad soil (mostly clay) and its good for the beez.

Q: Did you just turn it under into the soil?
A: Well, we had to whack it down first. We let it grow out so it was pretty tall. But then we just weed whacked it...and I just used clippers to get some of it up...which I then fed it to the goats (small amounts, in the afternoon AFTER they had their own hay so as not to cause bloat.).

Once it was down to the stubble stage I used the tiller to grind it all under. A determined (or cheap, as I was before I bought the new tiller) person can just use a hoe. But there is a lot of swearing involved in using that method. Then I just went and got the darn tiller. Best money every spent.

Q: How far in advance of planting did you have to turn it under?
A: Six weeks is supposed to be optimal. Any earlier than you'll risk not having the nitrogen available for the new plants - or have it sucked out of the soil trying to break down the new organic material. Any later than that you'll be wasting growing time. You can also just let some of your garden go "fallow" - just don't do anything to it and let it grow wild. Its a good strategy for rotational gardening.

Q: And did you have any trouble with it growing back as "weeds" in your veggie garden?
A: No more than any of the other stupid weeds! Dang it was a bad weed year. But really, nope most of it just crunched down in the soil. I was actually really impressed how well it did.

Q: If you have any good links to refer me to that would be great!!
A: Oh golly I love Gene L's work over on http://thecontraryfarmer.wordpress.com/ and also any of his books including "Small Scale Grain Raising." I also really like John Jeavons work in "How to Grow More Vegetables and Fruits...." Mother Earth News also has some good articles that you can search on their site.

I guess the big thing is.... don't let it overwhelm you. I was a nervous nelly for the longest time about the whole thing and it was hard to find the "real" cover crops at garden centers etc. And expensive to have shipped to me. So I just marched into our local feed mill and asked if I could have 5 pounds of buckwheat? Sure, they said, and it cost me about $4. For heavens sakes. Much better results than the deer in the headlights look I got from that guy wearing the orange apron, for sure.

Now get out there and get your cover crops going! Happy gardening!
Posted by Ohiofarmgirl at 6:56 AM

Vita looks like she knows a thing or two about chillaxin'.
My question - how did you sow the cover crops? scatter it by hand, or some kind of broadcast thingy like one used to use for spreading all those nasty lawn chemicals? Or some kind of chicken powered invention...ah, if only we could harness those little feathered natural rototillers for good...
-Java

I'm a nightmare with those hand crank thingies... so I just broadcast by hand. Its kinda just like tossing scratch to the hens. It works well for weird shaped or smaller areas. And for the larger areas I just plod along tossin' and walkin' then rake it over.

But now that you mention it... chickens pulling a planters.. humm you could really be onto something. Good thinking!

In Malaysia cover crops (Centrocema, Pureria Sps.) are grown in Oil Palm plantations. Apart from providing the Nitrogen they prevent other weeds from growing. But you have to pull them back once they start climbing the palm trees. In our case the cover crop seeds are simply broadcasted on bare grounds according to the seed sellers recommendation.

I will not only have to try using buckwheat as a cover crop one of these days but also finally get that wonderful Gene Logsdon book to add to my Ggene Logsdon book collection...I really like him. Very informative post.

Just right, Grandpa. A great reason to grow either oats or buckwheat is because it will really take off - and it will block out weeds.

Thanks Mr. H! Gene really is my hero - I like how he challenges us to use grain crops even in small amounts. I didn't know that he lived in Ohio (like me!) until I was most of the way thru one of his books! He is very sensible - which I like very much.

WOW! Thanks for the info FarmGirl! That's what I wanted to know. I live in the Los Angeles area and have been unable to find a county extension area out here. I don't think it exists. So I do alot of trial and error and talking with the local nursery owners until I find what works. I feel less intimidated now about this whole process and will probably give it a try. Thanks for all the details! You're a gem...

thanks Tammy - you had great questions. I'm sure there is an agent somewhere around there somewhere... and a regular feed store it would be worth the drive. Even out here I got the deer in the headlights look from a gal at our local nursery...but got a 15 minute informational chat from the feed store guy. You are so lucky to have a year round growing season! Crop rotation would be great for you.