Yes I Can! And Farm Notes 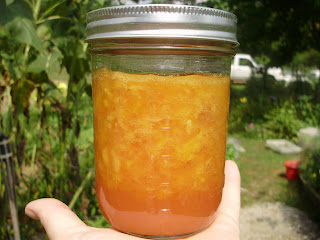 Peach preserves - low sugar and just lovely.
I'm so excited. Yes, I can. Can that is... as in canning. There has been a flurry of activity over the last couple of days. I fired up the pressure canner and am dabbling in that sacred tradition of "putting things by."

I am the biggest canning chicken in the world. Seriously. Steam? High pressure? Botulism? Yikes! So there tends to be a lot of wind up, fussin' around, and a certain amount of punching each other in the arm and saying "I double DOG dare you" goin' on.

In all we made about 16 pints of peaches and/or peach preserves, six pints of tomato sauce (as a trial), and about 6 quarts of turkey stock. I ran out of jars but I probably have another 10 quarts of stock and 10 or 12 pints of turkey meat to go... and by then more of the romas will be ready. A couple have already started to get ripe and the whole "turn red" thing has caught on like wild fire. All the "cool" maters are going ripe these days.

I parted up the turkeys that we dressed the other day. A few findings... yes they were on the light side and did not have huge breasts. But we got a ton of meat off them by cooking down the carcasses (and a lot of stock as well!). I filled the "pokey pot" (a new and hip term for the crock pot coined by our pal Sal) with thighs and legs, seasoned generously with mexically spices... and now we'll have meals in minutes by just opening up a jar of turkey meat, rolling in tortillas, covering in salsa..and voila. Dinner!  The seasoned meat turned out fabulously. This time I added water which yielded better results than before.

First, dang. The heat is a crippler... the humidity is just stifling. (Thats more whining than Farm Notes but I had to get it out).

* One of the younger turkey hens did not come home last nite, and we found Bramble on the bad neighbor's side of the fence waaaaaaay down there in the woods. She is incarcerated.  The young hen showed up and we just need to follow her to where ever she has a nest.

* Another young hen had a nest in the woods by the pond. Fortunately The Big Man found her. Last night we moved her to a secure location (The Bachelor Turkey Hut). Moving a broody is a tricky thing, does everyone know how? We let her set out there until it got dark and then hiked down together to find her.  The Big Man gently took her off her nest under cover of darkness and I took up the eggs (a total of 17).  With limited light we walked her up the hill with me going ahead with the eggs which I put in a prepared nest.

Without light we placed her on the nest, closed up the doors, and hoped she would sit down. She did! Today I refreshed her water and gave her food. This afternoon she was still setting so I think we are good. So 28 days from today.... Aug 31st give or take.. we should have poults. Actually that's good timing. Still warm enough, but not horribly hot. This heat is bad for broodies - eggs tend to explode (ick) and its very hard on the hens. She is in the shade and also in the breeze (but out of the weather) so we hope she makes it. If she does and has a successful hatch she'll be given a name and status as a "Momma" -- which comes with the benefits of not being sold or given away...and never going to the pot. 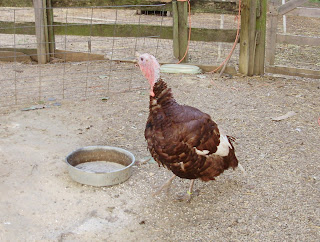 Turkey Bob figured out early that, just like hatching clutch,  a sunny disposition (and a snuggle) saves you from the pot. As a tom, Turkey Bob joined TurkZilla in the position of "herd sire."
* Turkey Momma is still laying. We are hoping she will set a nest also.

* Mrs. Dowlrimple and The Bugs (cutest and best looking clutch of chicks we've ever had) were successfully moved into the day coop with the salmon chicks. Mr. Tibbles and his gals were a little wide-eyed, but Mrs. D didn't really pay them much never mind. Eliza muttered something about "why are we in with the babies" but she'll just have to work it out. We still need to name that beautiful chestnut colored chick. I'm still hoping she's a pullet and not a roo.

* We are having duck madness and I need to sort out all these ladies. Because of the heat the chickens have pretty much stopped laying and the ducks are now producing more eggs than the hens! But the ducks all want to set nests so its a big to-do out there. Puddles has basically abandoned her babies and spends her time fussing around in her nest or playing tag with the boys (she always wants to be caught, if you know what I mean).  Its duck mania for sure.

* The stupid squash bugs have demolished my pumpkin patch. No one is happy. The guineas were put on notice to increase their bug eradication efforts or else. Neither of them boys is snugly, nor have they hatched anything but a ridiculous plot to scream at the neighbor's harmless barncat. All. Day. Long.

* We saw the first flock of geese the other day - and not our geese...but real wild geese flocking up. Kinda wondering if that was the beginning of the end of summer.... hum...

* Our efforts to get the fall garden in were stymied by a flaky compost guy.

Stay cool everyone!
Posted by Ohiofarmgirl at 5:59 PM

The peach jam looks quite lovely.

The mexi-turkey sounds yummy as well.

Hey Mimi! I'm kinda on a canning roll here. I always thought it was a huge ordeal, took the whole day, and at least 3 grandmas to make jam/jelly/preserves... but turns out it just takes a few minutes! Easy and fun
:-)