What's in your fridge?

Guess what I'm working on today? 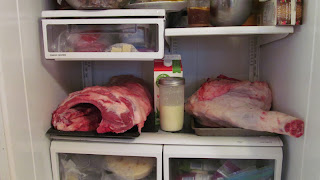 Belly and ribs on the left, ham on the right.

We butchered the second big pig this weekend and now today is nothing but meat, meat, meat, and more meat, followed by additional meat on the side!

We barely got both halves shoved in our 2 fridges. This is really just the belly - or the middle third of a whole side of pork - and a ham (a back leg). I can already see that I'll have a lot of lard and some spectacular chops! We think the pig ended up being just about 250lbs - which was the upper end of what I could help lift. And when I say "we" I mean The Big Man had to do the hoisting and I just provided management.

I was so glad to get this done. Not only because of the feed costs but also because we've had some colder weather and I was a little worried that the lone pig would be cold. Ha! That pig had a nice big layer of fat and was well marbled. One of my pals, you know who you are, said I didn't need to worry about that pig now because it could be snuggling with the first one in the freezer! Very funny.

Today will be about taking off the fat to be rendered into lard later, parting up the big hunks, and parceling into meal sized servings. I'm going to cure and smoke the bacons myself.  specially since I just got Ruhlman's new book, Salumi: The Craft of Italian Dry Curing

and there is a whole section on pancetta! And I've been swooning since I spotted this smoked porchetta over at The Jacked Up Grill. Does everybody know this guy? You have to check out the meals he's made! Plus he's very funny.

So that's what I'm up to today. I'm working myself up to cure and smoke a whole ham. I think my smoker might just be big enough. But definitely I'll be making a fresh (not cured) smoked ham again. Probably for our turkey day. Rest easy, gobblers, its all about pork this year.

After tomorrow our fridges will be full of chickens and turkeys. Hooray meat!

It's meat day at my central Ohio farm too. We sent 54 birds to the processor today and spent the rest of the day making deliveries and making room in the freezer.

That's alot of meat, but no covering?

I just picked up the Salumi book myself! Now about a curing chamber....

Drypond, that is fantastic! We'd love some deer meat. I saw a buck crossing the road yesterday and I tried to speed up..but missed. ha! kidding.. I'm just kidding...

CC - thats amazing! When are you serving the MLT's?

Excellent work, Anon, what processor do you use?????

Nope, Nancy. Because this was fresh we needed to chill it as quick as possible. I learned NOT to cover fresh meat from a local butcher. He says that any covering will hold in the heat and put it as risk. Of course the next day I wrapped up all the cuts.

I know, David, I'm going to have to work on getting another wine fridge. I used it as a cheese fridge and now I can use it "off season" for meat! I just hang the pancetta in my basement in the winter where it stays about 60* and maybe less. I wish I had a cellar or a spring house tho.

In reply to Ohiofarmgirl: There are two processors 'close' to me in central Ohio, (I'm in Newark) Plucky Poultry Processing in Martinsburg. They're pricier than the other place, do not vacuum pack and close after Nov 20 for the season. The place I really like, but it's 45 minutes away is Pleasant Valley Poultry. Very professional, vacuum pack, they put labels on everything (I love that!) with weights, very reasonable prices, they also do rabbits and all waterfowl, and are really nice people. They're located in Baltic, Ohio. You can google either one for contact info. At either place you can wait while they process which is great.

Anton, thanks so much for the info! Especially about the waterfowl. I'll spread the good news. Some folks are nervous about doing their own processing so knowing there are options available is great!