Yesterday was ridiculous. It was proof to all the naysayers that think all we do is sit around and have tea parties with the chickens and do a bit of gardening.

Yesterday alone we:
- Lost a gosling. As in, can't find him. He's a goner for sure but we can' figure it out.
- Had an "incident" with Dahlia that sent me running for the neighbors for help to get her fixed up.
- Worked outside in the hellacious heat until....
- The beez came for us. They were very mad. I got stung twice - so did my hubby. We ran for it.
- But the goats were out (on purpose) so I had to get to dog to round them up!
- Then the beez went for the dog! So we really ran for it. The goats were on their own.

We gave up and went inside. I made these brownies and altho it's a ton of butter and chocolate for one recipe.... they were perfect. It makes a big pan of brownies instead of a small one. 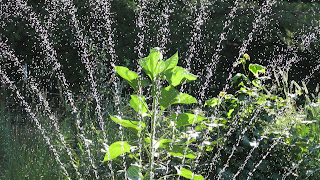 Finally, once inside we found out that today was going to be a very early wake up. Very, very, early.  I'm delirious but optimistic about today. I'm powered by coffee and brownies so I think I'm going to make it.

Happy Friday everyone! Did you get chased by beez yesterday?
Posted by Ohiofarmgirl at 6:36 AM

Nope, no bees since I don't think The Italian" counts! This weather is just horrible! Happy Friday OFG!

Sounds like a busy day for sure! And now I want brownies for breakfast! I got stung by a bee on the top of my foot on Wednesday afternoon while doing chores. My foot is STILL swollen! Even my flip flop is tight!

Oh, sounds like a typical day on the farm, LOL Poor Dahlia, I hope she is OK! You must have hit near a nest of them there beez. YIKES However, brownies DO make it better...maybe not ALL better...especially the bee stings...but some better. Have a great day!

I got annoyed by people who wanted their hay fields cut and I had to pay $450 for a tire. Snuck off to go fishing and lost my last Mepps #5 spinner in a tree. (not to mention flooding the bathroom after soaking a window gasket in the bathtub and going to sleep while my wife is going to school somewhere South of Here.)
No actual pain...
Does that qualify?

Wow, that was one hell of a day! No beez chasing us here.....at the moment!

Oh no! Da beez! Maybe a skunk visited them the night before or some other smelly honey thief. They'll be pissy for a few days.

Hopefully queeny didn't boink a crabby African drone. If she did, you'll have crabby bees for a while until she moves on to the next suitor in her spoo pockets. Anyone else in your neighborhood have extra aggressive bees?

Got chased by bees a few years ago and got bit all over my face. I made sure those bees went away!!!!!

What?! BEEZ?? What on earth! Were they just mad because of the heat? Were they honeybees or a ground wasp nest? I've never seen them attack someone at random!

Wow, you do live an exciting life! (No, honestly, I mean that!)

I gave a farm tour to some school kids and they got chased by ground bees! Now you know that's all they'll remember of their visit to the farm. Oh well!

Ha! Hi Robin!! Great to see you and thanks for the well wishes. :-D

Katie - it was ridiculous. Sorry about your foot!

All's well that ends with the goat still living, HDA.

These were even our beez, WCG! Traitors.

They were mad, Diana, real mad.

Anton, I laughed a lot... good thing you werent chased by angry parents too!