We had a very busy weekend - tons of things are going on here. Mostly we've been working on more clearing, more planting, some berry picking, and lots of farm animal wrangling. 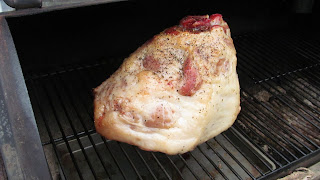 Salt and pepper and a little maple syrup. That's it.

Despite all the goings on I had time to smoke this fresh pork roast. Technically it is not a ham altho this roast is from the back leg of one of those huge hogs we had over the winter. The difference is that I did not brine or cure the roast first - I just smoked it. 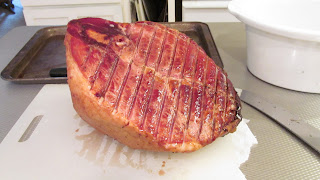 Behold. It is a vision.

I smoked it all day then finished part of it in the oven and part of it went into the crockpot for pulled pork. It's heavenly.The pink smoke ring is about a quarter inch thick. 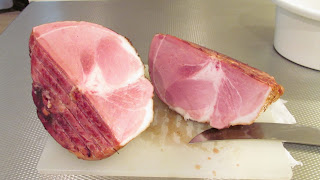 This is totally how we get 'er done.

We also had an awesome burn pile. But I tell you the truth, you have never seen betrayal until you've seen the sad dog looks you get when you walk past a pack of 100-pounders with a petrified hog hide and then throw that thing into a burnpile. They were veritably screaming at me that I was "ruining" it and if I was gonna throw it away, why didn't I "just give it to them? Momma! Momma! Nooooooo!"

But I was not swayed by their sad eyes and weepy pleas. Whooomp! Into the scorching hot fire it went...and it proceeded to burn all stinkin' day. As for them, The Dog Horde sat at the top of the hill in their yard, with smiling faces, half closed eyes, and tongues lolling out smelling the smokey goodness of my burn offering to porkdom.

To answer your question - I had the hide hung the in garage, mostly scraped of fat, because I thought I might "do" something with it. Like make a hat. However, "The Warden" told me to get rid of my science experiment. In truth I was wondering what would happen to it - it didn't rot or anything. Just got kind of petrified. It was kind of amazing.

Anyway. Tons to tell and I'm hoping to get caught up in the next couple of days. But you know what they say - you gotta make hay while the sun shines and I have a field of home made hay to cut.

Happy Monday everyone! Anyone else crush the hearts of their dogs with an epic burn pile?

Posted by Ohiofarmgirl at 7:59 AM

Huh, for not being cured or brined, that roast sure "looks" hammy. I wonder if you can't cut the skin into strips for best chew treats ever?

How come you didn't want them to gnaw on it?

Hi OFG, Your smoked pork looks heavenly. I can only imagine how it tasted. Have a great week.