Making hay, the sun was shining

Yesterday was insane. I picked strawberries, planted beans and squash, did more fencing... but most importantly - I made hay and yes, the sun was shining. 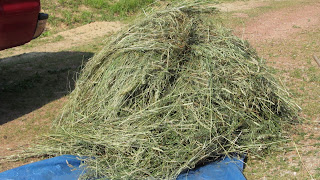 A short stack of hay. We pulled in 4 or 5 stacks like this.

This hay project has really been fantastic. We've learned a lot and ended up with a heap of hay all stacked up in the garage. I will do a more exhaustive "How to Make Hay" a little later on but here are some of the results. 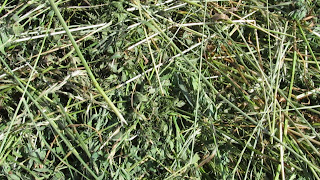 Close up of green gold - lots of alfalfa.

To be clear, my haymaking went nothing like the bucolic version from these videos. They must have a lot of practice because not only did my hay patch look like Vikings had hacked it all down. But those folks in the video also made it look a lot easier. My hay was a little long so it was not laying in neat rows - in fact, I had to cut some of it a second time. So it did not go as smoothly as shown in the videos but I probably had more fun then those video people. 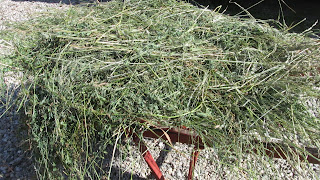 The goats get a wheelbarrow load like this and it keeps them busy all day.

Then I was attacked by crazed wildlife. I am not kidding. I had to get the dog to take care of psychotic rabbits charging me and some kind of crazy bird that was dive bombing me. Not to mention the soundtrack from my farm is not sweet birds a-callin'..... for heavens sakes. I could hear the goats screaming at each other, the roosters fighting, and the constant din of the Turkey vs Goose War ("Whoever wins, we lose."). I think those videos were made on some movie lot somewhere.

However, the instructions to hack.. I mean.. whack down the hay, spread it out to dry, flip and flop it over and then flip it into rows, and then turn it all over again..and again... while fluffing with a fork were perfect. Since I had a lot of alfalfa I let it cure for two days. It totally worked. 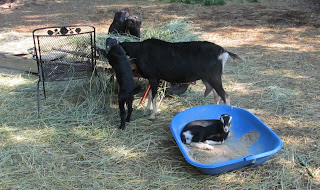 By the end of the day yesterday we loaded up all our hard won hay on tarps and drug it down the drive, thru the gate, and into the garage. That tarp thing was the best hay hack ever. It worked like a charm. To my surprise the hay did not tumble off the tarp - it stayed neatly stacked as we walked along. Then we could use the tarp to kind of lift up the hay to stack it.

Of course I had a lot of ideas about what to do with the hay once we got it taken up.... but no real plan. Rain was coming on last nite and we were exhausted so we made an up off the ground, makeshift stack in the garage. I'll solve the problem of a better stack today but for now it worked just fine. Using a rack, like they showed in the videos, allows for better airflow, keeps it in a pile, and encourages curing.

In the end, the hay looked and smelled great and the goats loved it. We got a nice little rain last nite so I'm hoping we are on our way to the Second Cutting several weeks from now.

Was it worth it? Sure! I learned something new, we had good success, and we probably are about even steven as far as costs go (as compared to purchased hay). The drought last year killed hay production around here.  Folks who were able to make hay were not selling it and if they were they were charging ridiculous prices. It's not looking much better this year. Prices have started high and are looking to increase as the summer goes along.

So with our new new fencing project completed and a nice stack of hay in the garage we should be able to keep all these goaties flush this summer.

Happy Thursday everyone! Are you making hay? Is the sun shining?

Oh well done you for making the effort to go haymaking! Takes a lot of effort but is worth it when one sees the grass turning into hay!

Well, I can't say that I'm making hay as I'm nowhere close to ambitious as you are, but I have been cutting the longer grass (by hand, with stinking kitchen shears, btw.....wtf am I thinking???) and wheelbarrowing it over to the goats that are not staked out in the grass. Great job, oh cutter, row maker, fluffer, hauler and stacker of hay!

Congrats! It's supposed to hit 90 today and we finished plating the last of the veggies last night. Just in time!

How many "bales" do you think you harvested?

How much land id you have in production?

To me there is nothing more wonderful than the smell of freshly cut hay, specially hay that has a lot of clover in it or Alfalfa.

Oh boy! I wanna see a picture of the finished stack, with an OFG for scale! How many months do you think it will last you?

We do a lot of hay here in Kentucky. We check our hay to see if it is dry enough. We call it the break test.
We pick up a handful of hay and try to break it in half. If it breaks easily, the hay is ready and dry enough. If not, It needs to dry more.