Answers to a few of the items from "Yesterday."

Hi everyone and thanks for all the comments and well wishes about our ridiculous day, "Yesterday." I think MW said it best, we do live an exciting life. You don't know the half of it, MW, you should see what else happens that I don't even talk about! 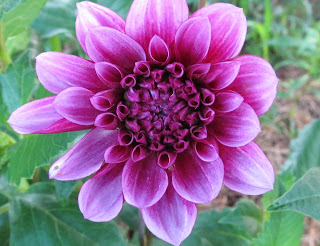 This beautiful dahlia is not in danger of the grill.

So a few answers to your questions....

Yes, we know why the beez were mad. And yep these were our beez! Ingrates. Anyway, it was so hot and muggy they were angry anyway....  but we had to work on whacking down some weeds near the hives. Thankfully my hubby put on his veil and other gear and headed down to work there. He was still about 2 feet away when they all came swarming up and covered his veil! So they were mad because we were too close and it was too hot for trimming the verge.

We gave them a while to cool down and were working in another part of the yard. But they weren't having it at all. I was even kind of far away and out of their line of sight when they got to me. Having brownies for dinner really helped. So did using lavender oil. Do you know about this? I was not a believer until I started using it.

Dahlia, the goat, is just fine. Now. It was touch and go there for a while. Especially when, during my tender administrations, she turned around and blew snot all over me. I tell you the truth, if Zander snuffs at me or licks me I'm get all "Oh BubbsyWubbsy that's the cutest thing ever".... but when Dahli did it I was all "You HAG! Do that again and I'll get my butcher knives and start the grill!" But she lived.

The gosling incident is a tough one. We have a varmint - which means there will be death and vengeance and someone's tiny head on a pike in the yard. At this writing we have the babies in a tub in the basement and Cindy Lou Goose and OD are in the chicken house. There will be more on this later but for now I have to go and check the trap. I've also deployed the troops, who are currently on patrol, so I need to review their reports. I'm hoping that one of the dogs will throw the ruined body of mine enemy at my feet. Today is a good day for a varmint to die.

Have a great Sunday everyone! Guess what? It's our wedding anniversary today! Here is the short version of how we found each other - again. And again. Third time is a charm, right? ... Or rather, he married me so I couldn't get away.

Posted by Ohiofarmgirl at 7:16 AM

Happy Anniversary pal! Sorry you had all the drama yesterday. The bee thing is particularly crazy.

The rabbits here are relocated and the chipmunks...well I can set a rat trap just a shade faster than they can breed.

Hope you take care of yours in short order.

Maybe you will get a new Fox Hair scarf for your anniversary?

With all the smell of dog at your place it is hard to believe that a fox would hang around for long.

I play WHLO 640 am radio all night long for the chicken yard. It keeps the varmints out of there. I had raccoons get into my chicks a few weeks ago *SAD* and killed 6 of the 10. What really makes me madder than anything is that they kill them, but don't eat them. It is such a waste! I forgot about the radio thing while they were in the hightunnel getting big enough to go to the coop.

Thanks Dave, we'll get that guy. We always laugh a the 'hav a heart' traps... we say, 'That won't help you much, varmint, when we blast you to kingdom come!'

More like a mink collar for my coyote hide cloak, Chai Chai. We'll get that slinky mink for sure. They are very bold hunters.

I forgot to wish you a Very Happy Anniversary~ I know by today I am late, but the wish is still there just the same.

Dandelion sap is an awesome remedy for bee stings, too. Pick one and let the sap well up and dab it on the sting. In moments you won't be able to feel any pain. The only down side to it is it is like latex and attracts all the dirt in the world to that spot and glues it right on.

thanks Carolyn! i'll remember that for next time. as it was i applied tequila. ;-)