Goats in the Midst

Not as exciting as "gorillas in the mist" but here are some goats in the midst of their new pasture. 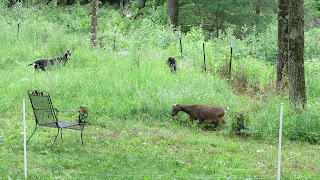 Goats in the midst of their new pasture.

One of the projects we accomplished last week was to do even more fencing! Yep. Farming is mostly about fencing, fencing, and even more fencing...with additional fencing to follow. Unfortunately it doesn't look like we will be getting much of a break on hay prices this year - which is why we were so glad to take up the hay from our patch.

Another way to beat high hay prices is to stake out new pastures for the goats. It's pretty easy to set up a new grazing area because we are fenced on all sides and about half of it already has electric hotwire. It's really just a matter of getting some posts and connecting new hotwire to the existing electric fencing. We connected 3 strands of wire and used those white push in posts. 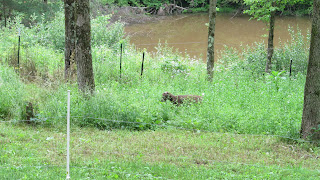 Nibbles in the tall grass.

I had intentionally been letting the grass grow at the bottom of the hill for this purpose. So we spent part of an afternoon stepping in the push in posts and laying out the hotwire.

The biggest problem was convincing the goats they could walk into the new area alone. Hence, the chair out there. If I walked down there and sat in the chair they could all run right down and start eating all the beautiful tall grass and clover. As soon as I walked away they started screaming and acting like someone was shooting arrows a them. It took a couple days but finally they started going to the new area by themselves. 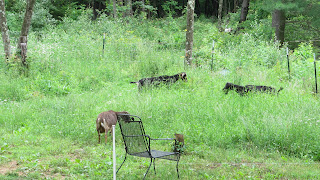 My chair for playing goat lifeguard in the new area. Lots of panic when I get up and leave.

The trade off for allowing the goats to graze instead of spoon feeding them expensive alfalfa is that they probably will not make as much milk. However, Dahli and Debbie are big milkers so even "good" for them is pretty darn good as far as averages go. Soon I'll be separating the babies, Darla and Daisy, at night and then we'll really see how much Momma Dahli and Grandma Debbie are producing. Of course...... Debbie is letting the babies sip off of her. We'll solve that problem later.

We are having a rain day here so I doubt if any of the goats will walk down to the new pasture. But that's OK, I'll just get a pitchfork full of that great hay we made last week.

Happy Monday everyone! Anyone else setting up new pastures?

Posted by Ohiofarmgirl at 6:39 AM

Yes! Yesterday afternoon we set up the cows' summer digs where they'll be until frost. Until now we've been moving them every few days and what a time consuming task that has been! I wish I had taken video of them running down the lane to their new home, it was wild!

We love our goats also, although we had to sell one of the girls as four gallons plus of milk a day was just too hard to keep up with last year. I had made enough cheese for this year also.
The pasture looks great!

Ware Ents! The goats figure they can outrun you in case of danger.

Is that the famous "fox and the axe" pond?

You may find this link interesting:

saw your chair...this week end I put a scarecrow up in the veg garden for the black birds. Unfortunately the two goats thought i was working and needed company, after much swearing and hoarseness of the throat I realized what the problem was! Gate has been reinforced. Why don't you try a stuffed "you" in the chair next time, unless you want the break...

We have been letting the goats and some horses graze in our old garden spot. It is full of clover and they love it!
Been looking for a new goat as I lost a mama this year during birth. Vet had to put her down, sad story.
Anyhow, how much milk do your girls give a day? I hear stories of goats giving 2 gallons a day but mine usually do about 1/2 to 3/4 of a gallon. thanks!

Setting up new pastures indeed! Of course these are electronic and there are no goats. But it's the same, almost, ok no.

Wow, they have a lot of tall grass to graze on! My goats would be very jealous!!!